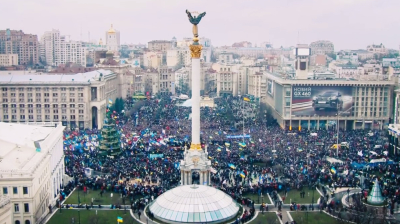 "Winter on Fire: Ukraine's Fight for Freedom" has been nominated for an Oscar.
By Carmen Valache in Istanbul February 25, 2016

Two recent documentaries about the Ukrainian revolution have enjoyed widely different receptions, revealing the difficulty in documenting complex historical events such as the 2013-2014 Euromaidan protests and their aftermath, and how easily a shift in camera focus can convey markedly differing tales about the same historical event.

The first documentary, Evgeny Afineevsky's Netflix-backed "Winter on Fire: Ukraine's Fight for Freedom", is celebrated as a tremendous feat of film making, the work of a team of 28 cinematographers who tirelessly recorded and compiled thousands of hours of footage during the 93 days of the Euromaidan protests in Kyiv to create an Oscar-nominated masterpiece.

The second, a special investigation by Paul Moreira called "Ukraine: Masks of the Revolution", broadcast on France's Canal+, picks up where the first left off and purports to reveal a side of the Ukrainian revolution unfamiliar to the West, to strip the Ukrainian revolution of its masks. It has been criticised by Kyiv, by French journalists stationed in Ukraine, and could become the subject of an investigation by France's Journalism Ethics Committee. Dubbed "the wrong Euromaidan", its appeal stems as much from the reaction it caused as from the documentary itself.

"Winter on Fire" is a likeable documentary, with a simple if reductive narrative – the heroic fight of an apolitical Ukrainian people that came together to topple a corrupt and abusive president – and it uses abundant footage over the course of 95 minutes to support that narrative. Russian-born Afineevsky spent six months in Kyiv, filming the Euromaidan protests in November 2013- February 2014 with the help of some 28 cameramen, and interviewing demonstrators in their aftermath.

Shot in the tradition of "The Square" (2013),  on the Tahir Square protests in Egypt in 2011, the documentary tells a story that is moving and easy to relate to, for the camera identifies and then follows individual Euromaidan heroes, the stories of whom are interspersed with long shots of crowds fighting against violent special military forces and mercenaries, and carefully selected footage of political and diplomatic events, all delivered in a constant play between past and present. In so doing, it captivates the viewer's sympathy and attention, while giving the impression of conveying the big picture behind deeply human tragedies.

In a rather simplistic manner, "Winter on Fire" marks a clear distinction between good and evil from its very onset with a brief, but powerful commentary that evinces the importance of what is to come. "While promising EU membership to the public, [Viktor] Yanukovych secretly negotiates a competing alignment with Russia. In fall 2013, a key milestone approaches, as Yanukovych appears ready to sign an association with the EU. Yet as the people look to the West, their leader turns to the East. And the future of the nation hangs in the balance."

With painstaking attention to detail, the camera follows the stories of characters that jump from the screen straight into the viewer's heart. The teenage boy who opens the documentary saying that he is ready to give his life for freedom and telling his mother that he loves her; singer Ruslana Lyzchynchko, who spends her nights on the square giving speeches and singing the national anthem; the 12-year-old homeless child, whose only schooling was Euromaidan and who is too mature for his age; Serhiy Nigoyan, a young Ukrainian of Armenian origin, who was one of the first victims of the revolution; and the priests holding mass in front of machine gun-toting security forces are memorable characters whose plight the camera communicates viscerally and poignantly.

Cameras heading towards the bullets as crowds run away from them skilfully convey a pallet of emotions ranging from solidarity to fear, panic, disgust, mourning, revolt, to exaltation and optimism. The abundance of graphic violence only enhances the viewer's solidarity with the protesters and dislike of the aggressors, as does the choice of music themes and sound editing of violent scenes.

"Winter on Fire" successfully rallies viewers around the utopian coming together of people from different walks of life – joined by a common ideal, freedom, which in Euromaidan equalled EU integration – and occasionally goes out of its way to discredit some of the political figures it depicts.

It is exactly this simple narrative that "Ukraine: Masks of the Revolution" attempts to debunk, albeit with a questionable degree of success. In order to do that, its director, journalist Paul Moreira, zooms into political symbolism that he claims was largely missed by those who watched the Euromaidan on television, namely the flags of rightwing organisations such as the Svoboda (Freedom) Party, the Azov Battalion and the Right Sector.

Moreira contends that these forces were a highly efficient minority in the success of Euromaidan – forces that the Ukrainian revolution armed and were then given political power, which later turned into a monster.

Moreira's 52-minute documentary spans some two years of footage, starting with the Euromaidan protests in November 2013, to a fatal attack on the trade union building in Odesa in May 2014, the Ukrainian-Crimean border in the summer of 2015, and Kyiv in the autumn of 2015.

Its wide scope and haphazard combination of events and interviews ultimately muddies the documentary's main argument: that Euromaidan created a Frankenstein far-right monster that is devouring its creator, and that this reality was purposefully kept secret by Ukrainian revolutionaries and the foreign powers that supported Euromaidan. Moreira claims this threat from far-right groups was unknown in the West; yet this is an issue that Western media have written about copiously. Moreira also conveniently leaves out details about Kyiv's fight against extremist groups and its efforts to integrate others.

Despite overstating the importance of the far-right in post-Euromaidan Ukraine, "Masks of the Revolution" raises valid questions about the state of the country after the revolution and the complexity of forces behind its transformation. Moreira does a good job at being both funny and tragic as he narrates his version of the rise of rightwing extremism in Ukraine. Take Igor Mosiychuk, spokesman of Right Sector Party, who was voted in as an MP in the October 2014 elections, for example, whose violent shenanigans and comical, oversized presence Moreira documents with Kusturica-like humour.

The social media-friendly gangster-come-MP aside, there is also the French Nazi trainee sniper who forgets to hide the badge with his nickname – Benito Mussolini – and the reality TV-like raids by masked and armed militias against drunken security guards, which are bound to raise a few laughs.

Meanwhile, the tragic siege of the trade union building in Odesa on May 2, 2014, which resulted in the death of some 50 pro-Russian protesters and the injury of another 200, blurs the line between good and evil that "Winter on Fire" had so clearly delineated.

"Let's not exaggerate," former Ukrainian economy minister Aivaras Abromavicius tells Moreira in an interview referring to the armed ultranationalist groups, "with the exception of the eastern part of the country, the majority of Ukrainians live a normal life and run no danger whatsoever."

Perhaps Abromavicius might be proven wrong yet, as he was in the case of Kyiv's appetite for making reforms., which forced him to resign in protest. If Moreira is right, the nebulous armed ultranationalist groups in Ukraine could assert their power again, should the government fail to rein them in and satisfy the demands for change of the Ukrainian people.

KYIV BLOG: How is Ukraine going to pay for dealing with the coronavirus stop-shock?
Ukraine's Economics Ministry forecasts 3.9% economic contraction in 2020
Just how painful would a sovereign debt default be for Ukraine?

Thanks to a dictator who jokes about keeping coronavirus at bay with vodka, the Minsk derby became the big game for football punters around the world as the Belarus Premier League got permission to carry on. Infectious enthusiasm, fatal for some?

Hard currency reserves back in focus. Net portfolio outflows since December 20 stacked up to $6bn.

For the banking sectors in CEE, hypothetical stress scenarios are becoming reality. A forum like the Vienna Initiative could be an ideal place to find coherent solutions during the current crisis.

ING: Negative growth for Central and Eastern Europe with more easing ahead
7 hours ago
Lukashenko’s death match
4 days ago
TURKEY INSIGHT: Peering into the forex hole
5 days ago
THE MITTELEUROPEAN VIEW: Why it is exactly the right time to fully revive the Vienna Initiative 1.0
7 days ago
BCS: Pricing in a global recession
10 days ago