European election in Poland a warm-up ahead of national vote 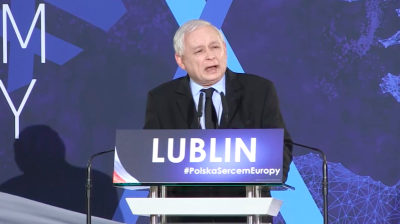 PiS president Jaroslaw Kaczynski campaigning in Lublin ahead of the European Parliament election.
By Wojciech Kosc in Warsaw May 24, 2019

Less than a third of the Polish voters will likely decide on May 26 who will represent them in the European Parliament in the next five years. That is a strikingly low turnout for an election that might trigger deep-running changes in Poland for years to come.

Polish political parties have been doing their utmost to rally voters for the Sunday vote in hope that a good result – low turnout or not, it is the final percentage of the scooped votes that will matter – will set off a wave on which they will ride to a victorious night this autumn, when the national election takes place.

For the ruling Law and Justice (PiS), a victory on Sunday will reaffirm its domination on Poland’s political scene and give the party a new momentum it urgently needs after somewhat clueless weeks in the run-up to the vote.

PiS’ began the campaign by stunning opposition with a multi-billion fiscal stimulus, including a new unconditional benefit for children and a one-off extra pension for the elderly.

But the ruling party has clearly struggled to contain recent problems that hit it more or less directly.

Perhaps the biggest issue has been their awkward sticking to defending the Polish Catholic Church after a documentary film exposed several rank and file priests as guilty of sexual abuse of children.

A number of high-ranked members of the Episcopate have also had to parry accusations of covering up paedophilia in their dioceses.

“He who raises his hand against the Church, raises it against Poland,” PiS’ chairman Jaroslaw Kaczynski said shortly before the film’s release in what was perhaps the most ill-timed remark of the campaign.

Another blow for the ruling party might have been revelations from the opposition newspaper Gazeta Wyborcza. The newspaper alleged that in 2002, Prime Minister Mateusz Morawiecki took advantage of his friendly ties with Cardinal Henryk Gulbinowicz – who features in the documentary – to buy land from the Wroclaw diocese.

Heavily discounted at the time, the land could be worth up to a hundred times more today after it was zoned to allow construction of an important road and commercial services, the newspaper alleged.

Despite setbacks, pooled polls suggest PiS' core electorate will keep the ruling party ahead of the European Coalition, the main opposition group. The coalition is a band of liberal, centre-right, and left-leaning parties led by the Civic Platform (PO), which ruled Poland between 2007 and 2015.

PO and its satellites are looking to beat PiS in order to boost confidence that it has lacked since losing both the general election and the presidential election to PiS in 2015.

The European Coalition has hit PiS for inability to stand up to Church over the paedophilia scandals and for Morawiecki’s land dealings. Its broader position is that PiS has marginalised Poland in the EU and is plotting for “Polexit,” or following the UK in leaving the bloc.

PiS' numerous feuds with Brussels — such as over logging in nature sanctuary the Bialowieza Forest or over the judiciary reform — serve as cases in point.

Still, the “Polexit” theory barely holds water for PiS, which is well aware that close to 90% of Poles support the country’s membership in the EU. But the ruling party does not share other parties’ enthusiasm for all things Brussels. PiS has long said the EU needs to be a confederation of sovereign states with less, rather than more, common policies.

That is a strategic sticking point between PiS and most of opposition – the European Coalition, the liberal-left Wiosna (Spring), and the social democrats from Lewica Razem (Left Together) – that support Poland in a strong EU, although accentuating different aspects of membership.

On the other hand, the loose right-wing grouping Kukiz 15 centred around rock musician-turned-politician Pawel Kukiz and the anti-EU far-right Konfederacja are striving to beat PiS in criticism of the EU.

That could potentially cost the ruling party a few percentage points on Sunday if electorates of Kukiz and Konfederacja mobilise on any greater scale.

The EU has featured as much in the campaign as domestic issues have. As the general election is barely six months away, it has overshadowed the EU issues at times with parties treating the Sunday vote as a warm-up to the crucial domestic vote.

They are right to do so in that the result of the European vote could bear on the general election and change Poland for years to come as a result.

PiS will be fighting not to concede to the liberal-left opposition but also to maintain its advantage over smaller, yet more radical, Konfederacja.

A weaker result for PiS in the autumn could mean the incumbent party – now with an outright majority in the parliament and with a friendly president – could need a coalition with radicals, pushing Poland further to the right.

The European Coalition is simply looking to create a momentum that will allow PO – possibly in coalition with satellites — to regain power and undo most of what PiS has overhauled. It would also cement the PiS-PO duopoly that has ruled Poland since 2005.

For the smaller parties like Wiosna or Lewica Razem, a good result on Sunday will be instrumental in driving a wedge between the two main parties. That, in turn, could land them as coalition partners in a new government, driving Poland’s political discourse a bit more to the left.

But the expected low turnout and the small difference between PiS and the European Coalition as well as uncertainty which of the smaller parties will cross the 5% threshold required to win seats makes the Sunday vote’s results all but predictable.

Pooled polls put PiS at 39% of the vote with the European Coalition trailing by 3pp at 36%.

Wiosna is polling at around 10% followed by Kukiz 15 and Konfederacja at 6% and 5%, respectively. Lewica Razem is at 2%.

A May 23 evening debate of the six parties on the state-run television TVP proved a disappointment for PiS and the European Coalition whose candidates turned out ill-prepared and unconvincing.

Lewica Razem, whose leader Adrian Zandberg sensationally won a key debate in 2015, pushing his party into the limelight, did so again by rolling out a straightforward message of Europe for everyone, “regardless of who sleeps with who.”

But, in a sign of politics still moving further right rather left in Poland, Konfederacja attacked PiS for “giving in to Jews” – allegedly over the thorny issue of wartime property restitution – and the left for “destroying Europe’s Christian roots.”