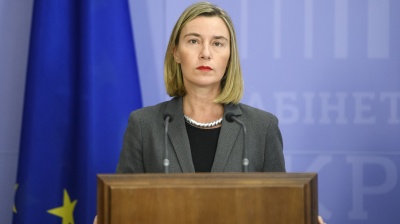 EU foreign policy chief Federica Mogherini has said the European bloc is determined to protect the freedom of its economic operators to pursue legitimate business with Iran.
By bne IntelliNews October 25, 2018

The proposed European Union special purpose vehicle (SPV) to facilitate remuneration for Iranian exports should be legally in place and “symbolically ready” by November 4, one day before the US steps up its sanctions drive against Tehran with the start of an attempted embargo on crude shipments from Iran, Reuters reported on October 24.

The SPV mechanism is designed to circumvent secondary sanctions under which Washington can cut off from the US financial system any bank that facilitates oil transactions with Iran and go after companies or individuals involved in such trade. According to information already provided by the EU, the SPV would enable bartering to avoid the need for cash transactions, while there would be no transparency over who was using the system.

In its most basic form, the SPV would ensure that Iranian oil bought by the EU, UK, Norway and Switzerland could be paid for with European goods shipped back to Iran. Plans to allow non-European countries to utilise the SPV for trading with Iran are reportedly under consideration. EU foreign policy chief Federica Mogherini jointly announced the payment system with Russian and Chinese officials in New York during UN General Assembly Week in late September.

“We’re trying to put the SPV in place before November 4 and are pretty confident we can do it,” one EU diplomat said, according to the news agency. “It won’t be operational immediately. It will take time and the time that takes will be months.”

So far, the physical location of a head office and other issues still had to be worked out, the diplomat added.

Clarifying the situation, a second diplomat said "everything was in place to have a symbolic start date" to show Tehran that the EU was meeting its promises. “We need to demonstrate to the Iranians that we are working to uphold the [nuclear] agreement in the face of US sanctions, to keep them in [the accord], but also saying that we can only move so far, so fast,” a third diplomat said.

Oleksandr Kamyshyn, CEO of Ukraine’s state-run railway operator JSC Ukrainian Railways, announced via Telegram that the company had paid coupons on its Eurobonds due in 2024 and 2026 on July 11. ... ... more