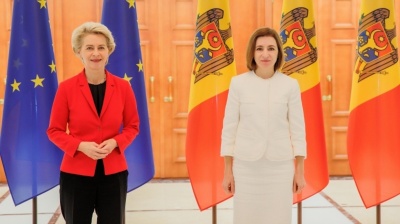 The European Commission has prepared a new energy support package for Moldova, including loans and grants worth €250mn, President of the Commission Ursula von der Leyen announced during a joint press conference with President Maia Sandu in Chisinau on November 10.

The Commission will work closely with donors to provide additional support to Moldova through the Moldova Support Platform, which will meet once again on 21 November in Paris, according to the EC’s press statement.

Moldova's Prime Minister Natalia Gavrilita estimated the cost of the energy crisis this winter at €1.1bn and is applying for financial support of €450mn from the country's European partners.

The Commission said that it is working with the Energy Community Secretariat to put in place an energy rescue scheme for Moldova to allow donors to support energy purchases.

Von der Leyen said she had come to Chisinau “to show the people of Moldova that the European Union stands firmly by your side”.

Moldova, which became an EU candidate country in June is showing "its attachment to the values that are at the heart of the European Union”, the European Commission president added, commenting on Moldova’s help for around 600,000 Ukrainian refugees that passed through the country.

“I hope that these measures combined will give Moldova much-needed support as it goes through the winter,” von der Leyen added.

"This financial assistance will help us diversify energy sources and provide compensation to low-income citizens to pay their bills this winter. European money is invested in the rehabilitation of roads, in community development projects to improve the lives of the people of Moldova," said Sandu, a statement from the Moldovan presidency said.

As regards the €250mn package, €200mn — split equally into loans and grants — is to help Moldova meet its gas supply needs. More precisely, to buy natural gas from sources other than Gazprom directly. More recently, Moldova is also importing electricity from Romania's spot energy market at prices well above those paid in the past to Ukraine and Transnistria.

The money should be available from January 2023.

In the past year alone, the European Union provided over €840mn in loans and grants to Moldova.