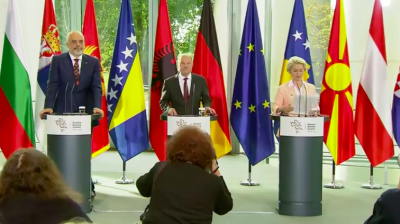 The President of the European Commission Ursula von der Leyen announced on November 3 an energy support package worth €1bn in grants to six Western Balkans countries to address the consequences of the energy crisis.

“[W]e are putting together a €1bn energy support package to protect the most vulnerable groups and boost much needed investments in energy diversification,” von der Leyen said in the statement.

“The first part is €500mn in grants as a very immediate financial support for the six Western Balkan countries to put them in a position for the very short term to support vulnerable households and vulnerable businesses,” von der Leyen said.

She recalled that during the COVID-19 pandemic the EU mobilised €3.3bn for the region.

Over the short- and medium-term, the Commission will provide another €500mn to advance energy diversification, renewable energy generation and gas and electricity interconnections through the Western Balkans Investment Framework (WBIF).

The summit also focused on the progress achieved under the Common Regional Market.

The EU welcomed the breakthrough in the negotiations of three new Common Regional Market agreements facilitating freedom of movement and finding job across the region.

Scholz commented that the agreements would “in very concrete terms … improve the lives of individuals in the region and make the region more united”.

“Kosovo is committed to regional cooperation and will push forward new agreements within the Common Regional Market, which bring to life basic freedoms and remove obstacles to the development of the potential of citizens in the region,” Kosovo’s government said.

Albanian Prime Minister Edi Rama stressed the importance of the agreements signed. “I cannot but emphasise that these agreements were three agreements that we were looking forward to since two to three years ago. They were blocked. The chancellor [Scholz] and his team worked very hard together with our people to convince everyone to sign them,” he said, according to a government statement.

The Western Balkans countries also adopted a declaration on energy security cooperation, and committed to redoubling their effort to implement the Green Agenda for the Western Balkans aligned with the EU's Green Deal.

The cooperation will contribute to greater energy diversification and cleaner energy, as well as to speed up reforms on their national energy markets to align with the EU.

North Macedonia’s Prime Minister Dimitar Kovacevski said that the countries of the Western Balkans have serious work ahead of them, in terms of improving efficiency and competitiveness of the economies, which will lead to accelerated regional economic growth and development.

Both Scholz and Borrell commented on the importance of engagement with the Western Balkans.

The Berlin Process was intended to revitalise the enlargement process, when it was launched by then German chancellor Angela Merkel in 2014. More recently, there has been a fresh impetus for EU enlargement following Russia’s invasion of Ukraine in February. Four months later, both Ukraine and Moldova were given EU candidate status and Albania and North Macedonia were given the long-awaited go ahead to start accession negotiations.

“The Berlin Process is a clear demonstration of our strong engagement and partnership with the Western Balkans, as future members of the EU. Regional cooperation cannot be detached from our common values,” Borrell said in a tweet.

Scholz spoke out strongly in favour of the accession fo the Western Balkans countries to the EU.

He described the integration of the Western Balkans into the European Union as “a central preoccupation for me”. “This is even more important in the face of Russia's war and brutal aggression against Ukraine,” he added.