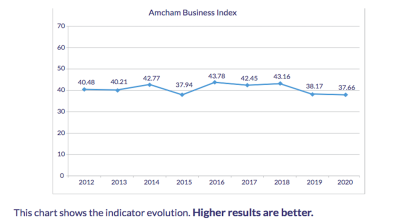 The business confidence indicator based on an annual survey of the American Chamber of Commerce in Albania (Amcham Albania) members dropped in 2020 to its lowest level since the index was launched in 2012.

The survey showed the overall AmCham Business Index — based on a range of indicators including the business climate, performance of the economy, business activity, the financial environment and human resources — dropped by a modest 0.41 points to 37.66 (on a scale of 0 to 100).

While the fall compared to the 2019 value was only minor, after a steeper fall the previous year, Amcham pointed out that it was still “significant as it marked the lowest level of confidence from businesses since the index’s inception in 2012. Furthermore, the overall business sentiment was unable to recover from the more significant drop of 5% a year ago.”

According to the Amcham report, the decline appears to be linked to the impact of the coronavirus (COVID-19) pandemic on the economy, combined with the lower than expected rate of improvement on economic and investment reform related indicators.

“The need for a stronger change of policies on investment environment reforms is widely reflected in the survey,” the report said.

One of the key components of the overall index, Business Climate, declined by 1.57 points compared to 2019, with more than 71% of AmCham members saying they perceived the business climate in Albania as unfavourable, while just 9% considered it as positive and 20% were neutral.

Not surprisingly, given the disruption caused by the pandemic, the biggest decline was for the Performance of the Albanian Economy indicator, which dropped by 5.64 points compared to 2020, with 80% of the respondents saying that the performance of the economy had declined in 2020.

Other areas of concern were monopolies and unfair competition, the informal economy, the internal political climate and finding local qualified staff.

However, the report notes that despite improvements “some of these indicators are still in the “red zone”, indicating the high risk that they expose to the business climate and the urge of businesses requiring significant further improvements.”

The survey shows generally positive views on relations with public institutions and government authorities, including the tax and customs offices, local governments and ministries. Views were particularly upbeat on energy supply, with 67.33% rating that category positively.

The report also showed that despite the challenges they reported, Amcham members remained committed to continuing their business activity in Albania.

“[T]hey value the country potentials and hope for further improvement in reforms and in the legal framework. They urge the government to quickly implement reforms to develop the market economy and increase its role in the region. In their comments, respondents express their belief that an environment of transparency, fair practices and democratic standards will guarantee a better future for investments and economic development,” said the report.

The index is based on a survey of representatives of 220 Amcham members, which include both local and multinational companies.