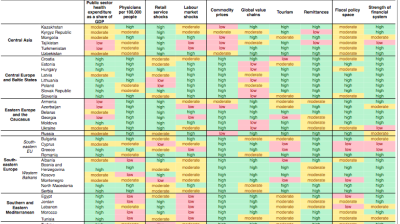 A new monitor from the European Bank for Reconstruction and Development (EBRD) reveals that numerous states from the Central, Eastern and Southeast Europe and Eurasia regions are highly vulnerable to external shocks in a variety of areas.

Specifically, the EBRD looks at the resilience of states in the region to falling commodity prices, value chain disruption and a decline in tourism and remittances, as well as assessing their economies’ resilience to domestic disruption.

Not surprisingly, the main oil and gas exporters in the region — Kazakhstan, Turkmenistan, Azerbaijan and Russia — are vulnerable to commodity prices shocks, as are Mongolia and Tajikistan, which rely on metals and mining, and to a lesser extent Kyrgyzstan, Uzbekistan and Armenia.

On the other hand, the main hit to the economies of Central Europe relates to their integration into global value chains.

For Albania, Croatia, Montenegro and Georgia, the biggest threat is from the almost total shutdown of their tourism sectors, as hotels and restaurants are closed and flights grounded. In all four countries tourism accounts for a quarter or more of GDP.

The poorer countries in the region depend heavily on remittance inflows, in particular Kyrgyzstan and Tajikistan, though to a lesser extent also Moldova, Ukraine and some countries in the South Caucasus and Western Balkans.

When it comes to domestic shocks to the economy — specifically those related to the lockdowns aimed at preventing spread of the coronavirus (COVID-19) — the EBRD writes that "demand-side economic effects are likely to be larger in countries where retail services account for a greater share of GDP, as in Lithuania, Poland, Cyprus, Montenegro and Turkey. Effects are also likely to be larger where temporary restrictions on work result in significant income losses: for instance in Central Asia, the Caucasus and the southern and eastern Mediterranean.” 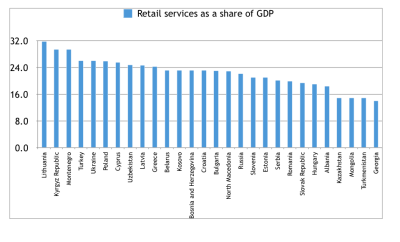 The EBRD also looks at countries’ ability to implement fiscal measures to support vulnerable individuals and companies. This will depend on existing levels of debt and fiscal deficits as well as the cost of borrowing in the market, the development bank says.

“Fiscal space is already limited in many countries, in particular in the Caucasus, Central Asia and the southern and eastern Mediterranean. External financing needs are already high relative to reserves in several economies. Financial systems may also come under greater pressure in countries with already high levels of non-performing loans,” says the report.

Montenegro, which has already borrowed heavily for infrastructure investment, has the least fiscal space among the Central and Southeast European countries.

To assess the ability of countries’ healthcare systems to respond to the coronavirus pandemic, the EBRD compares public health spending as a share of GDP and the number of physicians per 100,000 of the population.

“The coronavirus is placing countries’ healthcare systems under unprecedented strain, while domestic containment measures are weighing on both supply and demand,” it comments.

Worryingly, the monitor “shows that public-sector health spending in the EBRD regions is far below that in advanced economies, with typically fewer doctors per population, in particular in the lower-income economies.”

Public health spending is particularly low in Tajikistan and Turkmenistan — both of which claim they so far have no coronavirus cases at all — and in parts of the South Caucasus. 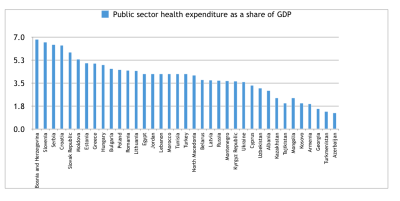