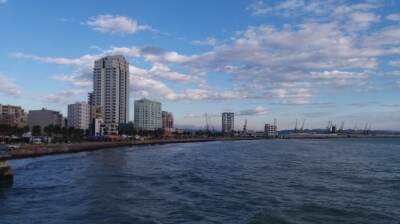 The project was launched on November 29, Albania’s Liberation Day holiday, despite strong objections from the country’s main opposition party, the Democratic Party.

Durres Yachts & Marina will have luxury apartments as well as a marina for super yachts and cruise liners.

It will be built in Albania’s second city Durres, 34 kilometres from the capital Tirana and currently the site of the country’s largest port.

In its press release, Eagle Hills highlighted Durres’ long history, dating back to 627 BC, and its many archaeological sites including the Roman Emperor Hadrian’s amphitheatre, the second largest in the Balkans.

Mohamed Alabbar, chairman of Eagle Hills, said the company plans to create the “Monaco of the Adriatic”. “You have this incredible history in the background, alongside what will be a whole new luxury destination,” he added.

The existing cargo port in Durres, which currently sits right in front of the city, will be moved further along the coast to make room for the new tourist port.

“This development is the pinnacle of luxury living, whilst at the same time bringing immense new investment, infrastructure and long-term growth opportunities to Albania,” said Alabbar.

Previously, Eagle Hills signed a memorandum of understanding (MoU) with Albanian Seaports Development Company on the project in August.

Prime Minister Edi Rama said at the time the MoU was signed that the investment will turn the port into a hub for tourists, trade and luxury travel.

Earlier this month, Albania’s parliament approved plans for an accelerated procedure for the Port of Durres project at a heated session on November 9.

The proposal passed without difficulty, as Rama’s Socialists dominate the Albanian parliament. However, the prime minister clashed with opposition politicians in parliament when they criticised the project.

He also accused Rama of working with Serbian President Aleksandar Vucic to “destroy his country to fill his pockets”. Another of Eagle Hills’ projects is in Serbia, though beyond that the connection to Vucic is unclear.

In response, Rama slammed opposition politicians for “throwing mud” at the project that would “transform Durrës into one of the most important points of tourism in the Mediterranean”, according to a government statement.

Commenting on the need for the accelerated procedure, he said “we have no time to lose because we have been negotiating this contract for more than a year”.

He accused opposition critics of being “impudent” and “infidel” and accepting Russian money to overthrow the government.

At another parliament session on the development on November 24, Rama spoke of the old port in Durres as being a “black platform of pollution and rust that has nothing to do with the 21st century”.

After the Socialists were reelected in 2021, Rama outlined plans for his third mandate as prime minister, including large-scale infrastructure investments. New ports and airports planned in the country are intended to develop its tourism industry.

Eagle Hills’ focus is on the development of new city hubs in high-growth international markets. It is is currently developing mixed-use projects in Morocco, Bahrain, Jordan, Serbia and the UAE.

In Serbia it is the developer of the high-profile Belgrade Waterfront project in a formerly run down district of the Serbian capital. Belgrade Waterfront had a controversial start because of the unannounced midnight demolitions of old buildings to make way for the new construction, which sparked mass protests.