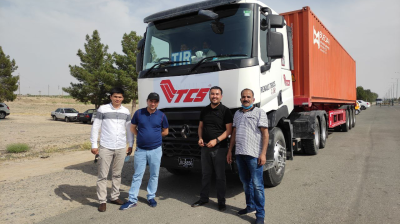 It was in early May that the first-ever Pakistani cargo truck to pass through Afghanistan’s border with double landlocked Uzbekistan crossed the frontier to deliver medicine. With leather products loaded on board, it then trucked back to Faisalabad in mid-May.

The freight journey there and back took place as a pilot project under an initiative intended to “boost regional trade integration and connectivity” drawn up by the United States Agency for International Development (USAID).

The Transports Internationaux Routiers (TIR) convention is a customs agreement that facilitates the international transport of goods. The multilateral treaty eliminates the need to pay customs duties and taxes. Afghanistan rejoined the TIR after a 30-year suspension in 2013, while Pakistan joined in 2017.

RFE/RL cited William Byrd, a development economist at the United States Institute of Peace, as saying that the pilot project was an “encouraging development” but “more a proof of concept than a milestone”.

“If this gets taken forward by expanding to other Central Asian countries and is scaled up over time in terms of the volume of transit trade, there will be important benefits for both Pakistan and Central Asia,” said Byrd. “If this transit trade develops on a larger scale, it will also increase the economic stakes of neighbouring countries in Afghanistan’s peace and stability.”

The creation of more direct, and at the same time less costly transport corridors, to countries with a coastline has been a priority of the Uzbek government over the years. It was perhaps the double landlocked situation that influenced the first president of post-Soviet independent Uzbekistan, Islam Karimov, to put in place protectionist measures, given how high import duties on many goods became. 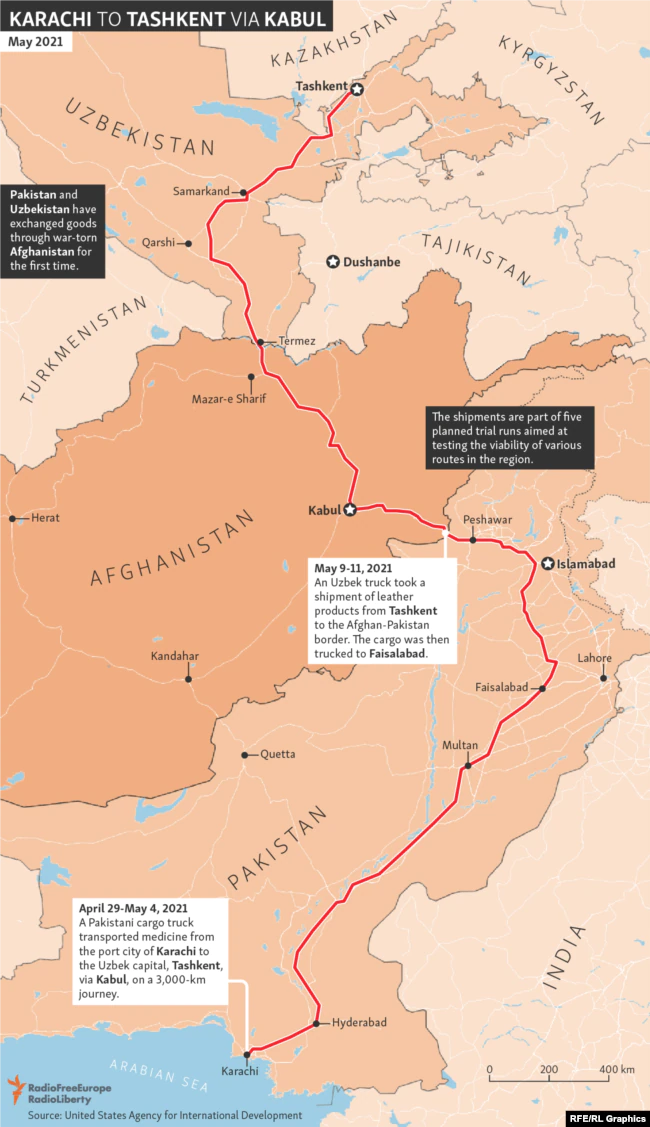 The TIR is thus somewhat attractive to Tashkent. The pilot project just completed is the first in a series of five planned trial runs involving goods flows from Central Asian countries via Afghanistan and China. It is aimed at testing the viability of various routes for international transit, with participants documenting the associated operational and logistical challenges during the required cross-border journeys.

“Our objective is to have greater connectivity with our western and northern neighbours,” Dawood told RFE/RL’s Radio Mashaal. “So, we are very encouraged. We want to do more [trade].”

Dawood said Islamabad expects to sign preferential trade arrangements (PTAs)—which could include lower or even no tariffs—with Uzbekistan and Afghanistan in the coming months.

Khalid Taimur Akram, executive director at Pakistan’s think tank Center for Global & Strategic Studies (CGSS), told bne IntelliNews that both his country and Uzbekistan were major stakeholders in the Afghanistan peace process. The dynamic efforts of both states have led to a transformed regional integration process to connect all the regional nation states, he said.

Akram added: “Central Asia to South Asia regional integration holds immense importance in today’s changing dynamics of the world. Thus, the wider economic alignment between Uzbekistan and Pakistan via Afghanistan plays a pivotal role in the socio-economic development of the region. The inclusive economic progress has paved the way for the three countries to enhance the spheres of cooperation. Therefore, the first-ever shipment from Pakistan under TIR to Uzbekistan has brought a thaw in trade ties”.

The trade route from Uzbekistan to Pakistan via Afghanistan would ease and open up access to Pakistan’s Gwadar port on the Arabian Sea for both the Uzbeks and Afghans, noted Taimur Akram.

Pakistani transport company Best Trans Pvt and Uzbek freight-forwarding company Asad Trans—two firms involved in the pilot project—plan to boost the number of trucks carrying cargo to Pakistan and Uzbekistan to 50 by the end of the year.

Independent analyst Igor Tsoy observed that Uzbekistan's desire to reach the Arabian Sea and the Indian Ocean via Pakistan was entirely understandable. But the transiting of goods through Afghanistan remained fraught with many risks, he said, with the unstable political situation, the withdrawal of US troops by September, most of Afghanistan coming under the control of the Taliban, the lack of unified leadership in Afghanistan and the country’s lack of infrastructure among obstacles.

The UN Security Council designated the Taliban movement as a terrorist organisation in 2003.

“The militants of the anti-government forces have already blown up power transmission towers going from Uzbekistan to Afghanistan three times in Afghanistan. This led to a sharp rise in insurance premiums, consequently making it impractical to transport goods through the territory of Afghanistan,” Tsoy noted.

It remains unclear if the Taliban has given its backing to the Pakistan-to-Uzbekistan cargo route, which passes through territory it controls. The Taliban currently commands or, is struggling for command of, around half of Afghanistan.