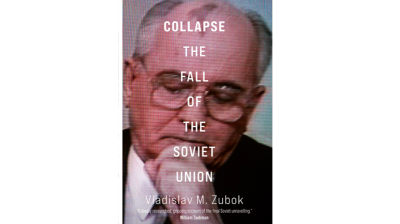 Vladislav Zubok’s book ‘Collapse: the fall of the Soviet Union’ was years in the making, and it shows: this is a meticulously researched book examining the causes of the demise of the Soviet Union and challenging the frequently held view that the collapse was inevitable.

Zubok, now a professor of international history at the London School of Economics (LSE), was airborne at the moment the Soviet Union ceased to be, on a flight from the US to Moscow. In the years since then, he writes, the passing of time has tended to cause views on its demise to crystallise rather than become more considered. In the West, the fall of the Soviet Union has become almost universally seen as inevitable, while Russian views are polarised between those who feel they are well rid of the communist era, and those who look back with nostalgia.

The appointment of Mikhail Gorbachev as leader of the Communist Party in March 1985 was, as identified by Zubok, the critical turning point. He avoids the assumption that the Soviet Union was doomed, instead examining the choices by its new leader that led ultimately to its undoing. “Gorbachev lies at the centre of the puzzle,” he writes. He skilfully profiles Gorbachev and other key actors, notably Boris Yeltsin, illustrating the intense rivalry between the two.

Zubok identifies the five broad reasons seen as contributing to the fall of the Soviet Union, among them the US’ superiority in the Cold War, the policy of glasnost that discredited the communist ideology, the implosion of the Soviet economy, national independence movements and opposition to Gorbachev’s reforms from powerful Soviet elites. He argues that “none of these causes, when taken separately, could have destroyed the Soviet Union … all these threads had converged in a kind of perfect storm, unleashed by the rule of Mikhail Gorbachev.”

The changes made by Gorbachev followed a decade and a half during which the Soviet leadership was aware of the need for reforms, yet resisted them. However, when Gorbachev did launch the long-overdue reforms, they were underpinned by ideas and designs that were “fatally outdated, economically flawed and led to the destruction of the existing economy and polity from within”, according to the author.

Specifically, he describes the leader’s move to dismantle the Communist Party apparatus as a “historic miscalculation”. Perestroika “exposed the Soviet Union to the demons of economic chaos, political populism, nationalism and more”. Having initiated these changes, Gorbachev was unable to control the “destructive forces” he had unleashed.

In particular, the book delves into the economic and financial issues behind the collapse, as shown by the massive injections of ruble liquidity leading to hyperinflation that rendered the population’s savings worthless. Indeed, by the time Ukraine departed from the Soviet Union, sometimes seen as the point after which it was unable to recover and reshape itself, the union was already in a state of financial collapse.

In this weighty yet readable tome Zubok draws on his interviews with people at the heart of events including Mikhail Gorbachev’s former aides and high-ranking western diplomats, as well as a huge range of archive materials and other sources. It’s this depth of research and lengthy consideration of events in the tumultuous year of 1991 that makes his book stand out from the many others that explore the collapse of the Soviet Union.

‘Collapse: the fall of the Soviet Union’ by Vladislav Zubok is published by Yale University Press.

This article is part of a series marking the 30th anniversary of the breakup of the Soviet Union. Read the other stories in the series here:

A green revolution brought the USSR down

Widespread nostalgia but no going back

Remembering Moldova's children of the Gulag

Strong institutions are better than a strongman leader

DEATH OF THE SOVIET UNION: The borders drawn in the 1920s are serving Russia well in the 2020s

Turkey-Armenia talks seen as key to opening up regional transit links
Azerbaijan president uses rare interview to threaten Armenia
DEATH OF THE SOVIET UNION: The borders drawn in the 1920s are serving Russia well in the 2020s