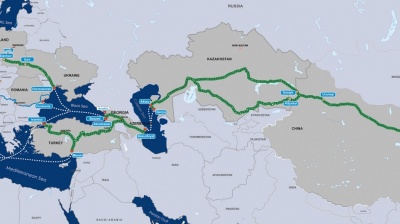 The "Middle Corridor". / Commonspace.eu
By Nizom Khodjayev in Almaty June 25, 2022

Vladimir Putin might well have monumental ideas about Russia reorientating its economy towards the east and the south, but right now cargo dispatchers in China faced with sending goods to Europe via either Russian or Kazakh territory are increasingly opting for the latter.

To many in the transit trade, Russia, with its sanctions-entangled economy, just isn’t an option anymore. Volumes dispatched across Kazakh railroads are booming and new routes out of China, including the China-Kyrgyzstan-Uzbekistan (CKU) railway, are planned.

Paul Stronski, a senior fellow at Carnegie Endowment for International Peace’s Russia and Eurasia Programme, pointed to the difficulties for Russia in mid-June when he told the South China Morning Post that a rail line from the Chinese border through Kazakhstan, Russia, Belarus and into the European Union “heavily subsidised by the Chinese side” and believed vital to getting goods from China to Europe through the Eurasian Economic Union (EEU) “is now dead”, Stronski said. 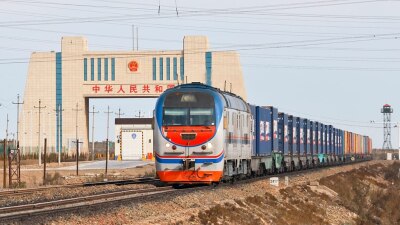 “European suppliers now are wary about putting their goods on a train via Russia given the reputational risks, or fears that Russia will hold up these goods,” Stronski said. “Chinese producers have grown wary of using the route, given all the same reasons,” added Stronski.

Тhe Kazakhstan Temir Zholy (KTZ) company lately reported that the Aktau Sea сommercial port, Kuryk port and Aktau Marine North terminal—key Caspian Sea points in the Trans-Caspian International Transport Route (TITR), also known as the key section of the “Middle Corridor” that provides multiple options such as Europe-via-Turkey—have doubled their shipping volume. And head of the Aktau Sea commercial port, Abai Turikpenbayev, said that the volume on the TITR was set to increase sixfold this year to up to 3.2mn tonnes. 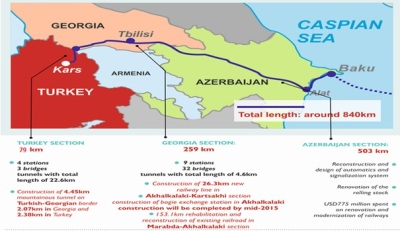 The Azerbaijan-Georgia-Turkey (or Baku-Tbilisi-Kars railway) is a key section of the "Middle Corridor (Credit: Turkish Ministry of Foreign Affairs).

AktauMarine North terminal is actually part of three cargo routes, namely TITR, Transport Corridor Europe-Caucasus-Asia (TRACECA) and the International North-South Transport Corridor (INSTC) that at its full extent would reach from Finland to India via Russia and Iran, the South Caucasus and Iran (though the Russia-to-Finland leg has to be a doubtful prospect as thing stand, especially as, once in Iran, consignments have several other ways through to Europe). Cargo from the Aktau terminal is shipped to Iran, Russia and Azerbaijan.

Kazakhstan is already part of China’s investment and transport infrastructure Belt and Road Initiative (BRI), which envisages Kazakhstan as a transit zone for Chinese goods flowing to Europe and vice versa, but this role is about to expand further as European and Caucasus nations are seeking to enhance the TITR. 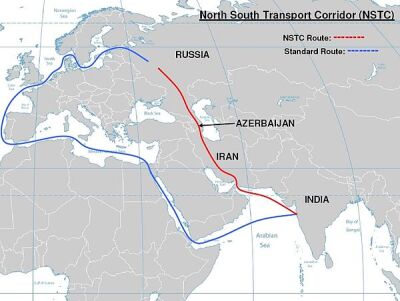 The INSTC concept takes cargo through Russia to Finland. But once goods reach Azerbaijan via Iran, there are other options heading west (Credit: zbk1, cc-by-sa 3.0).

Due to the global preoccupation with Russia’s war against Ukraine, the May 10 meeting in Ankara between Kassym-Jomart Tokayev, Kazakhstan’s president, and Turkish President Recep Tayyip Erdogan, seemingly slipped under the radar in terms of mainstream geopolitical observers. Nonetheless, their “Joint Statement on Enhanced Strategic Partnership” includes an outline of a new phase not just in bilateral relations but also in the reconfiguration of the multilateral map of Central Eurasia. Though hardly the only agreement of its type knocking about, perhaps the most broadly significant aspect of the agreement is their mutual commitment to enhance the TITR.

Tokayev noted at the meeting with Erdogan that “after Kuryk seaport [on Kazakhstan’s Caspian Sea coast] joined the Trans-Caspian corridor, cargo transportation time from Khorgos [on Kazakhstan’s border with China] to Istanbul… which used to take 60 days, now provides arrival in just 13 days.”

He added that Kazakhstan has already started “diversifying oil export routes to China and Europe, including the use of Turkish transport corridors.” This trend is expected to continue expanding going forward, as Kazakhstan increases the capacity of its oil pipelines and upgrades the Aktau and Kuryk seaports.

During a press conference on May 25, Wang Lingjun, Deputy Minister of the General Administration of Customs of the People's Republic of China, spoke about an improvement of China’s customs system at the Alashankou and Khorgos land ports on the Sino-Kazakh border. These were naturally expected to boost trade between the two nations this year.

Figures reported by data-gathering agencies this year have already shown a major recovery in Kazakhstan’s trade turnover with China. It amounted to $9bn in the first four months of 2022, the General Administration of Customs of the People's Republic of China announced on May 18. Kazakhstan’s QazTrade said earlier that trade with China in the first quarter of the year stood at $4.7bn, up by 35.6% y/y.

On May 25, transport and logistics company PTC Holding completed the second stage of the Dostyk TransTerminal terminal on the Chinese-Kazakh border, doubling the terminal's throughput from 160,000 TEU to 320,000 TEU.

Over on the other side of landlocked Kazakhstan (the world’s ninth largest country at 2.72mn square kilometres), the volume of transported cargo jointly handled by Kazakh state-run railway operator Kazakhstan Temir Zholy and Azerbaijan Railways jumped to 1,388,100 tonnes, up by 1,088,800 tonnes, or 364%, year on year.

Kazakhstan's rising emergence as a transit hub for bypassing Russia is also highlighted by certain geographical advantages. There are, of course, existing routes between Asia and Europe via the Suez Canal, but the shipping costs and delivery times are greater than the alternative routes via the Caspian Sea. INSTC is one of the projects billed as a superb alternative to the Suez Canal option. Goods flowing from Kazakhstan can link to INSTC.

Some, however, believe that Kazakhstan may not stand as a long-term trade beneficiary of the loss of Russia's trade routes at all.

Nathan Hutson, a professor at the University of North Texas, wrote in an opinion piece for Eurasianet in late March that Kazakhstan may face some setbacks as a transit zone under the Belt and Road initiative. 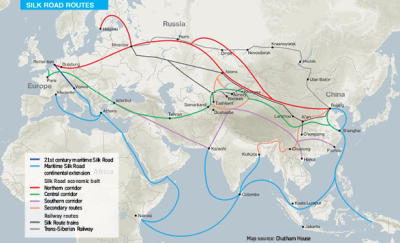 China will be reassessing its modern-day 'Silk Road' routes given the geopolitical disorder.

As Kazakhstan’s territory under the BRI is primarily useful for passing on cargo further along to Russia, Hutson suggested China could focus on prioritising cargo routes that go through other Central Asian nations. He mentioned an example of Chinese leader Xi Jingping moving “to shore up diplomatic ties along the southern route, discussing trade and transit with the leaders of Turkmenistan, [the president of Turkmenistan] Gurbanguly Berdimuhamedov and his son and [then] heir [now president], Serdar.”

“Kazakhstan is the Central Asian nation with the most to lose from BRI [plans] disruption. BRI transit trade had been a bright spot in Kazakhstan’s otherwise bleak economic landscape in recent years,” Hutson wrote. “Even while the COVID pandemic was raging, trans-Eurasian rail corridors experienced growth; in 2021, the BRI network, of which Kazakhstan is a major hub, handled about 15,000 trains, ferrying almost 1.5 million containers.

“The massive new inland port of Khorgos, on the Kazakhstani-Chinese border, often portrayed by Kazakhstani officials as the Belt and Road’s ‘buckle’, generated a nice revenue flow into state coffers, despite rampant smuggling. Now, it seems likely there will be a sustained drop in trains passing through Khorgos.”

Deputy Minister of Transport of Uzbekistan Abdusamat Muminov told Trend news agency in March that Chinese, Turkmen, Kyrgyz, Azerbaijani, Georgian and Turkish officials were working with Turkmenistan to develop an international multimodal Asia-Pacific (China)-Central Asia-South Caucasus-Europe route, which appears to entirely bypass Kazakhstan. He was presumably partly referring to the CKU, which would form the first segment of that infrastructure.

Other observers, meanwhile, suggested that should the death of the BRI be brought about by realignments, that might be a moot point, since BRI would simply go on to exist in a different form and likely continue to rely on Kazakhstan in one form or another.

“Considering that for Beijing, the Belt-and-Road is a political rather than an economic project, I think that in the conditions of the polarisation of the international system, China will still be interested in maintaining and expanding its influence. Yes, most likely, the project will not exist in its original version, but it is highly likely that the southern Belt-and-Road routes will be activated, as well as China’s ties with Russia will be intensified, including within the transport corridor passing through Kazakhstan,” Anastassiya Reshetnyak, a political analyst working at independent think tank PaperLab, told EURACTIV in early June.

Kazakhstan's territorial importance for connecting the West with China appears unlikely to be eroded any time soon. Russia, on the other hand, has a lot to do if it wants to transition to a new relevance.

Sniper used to kill Colonel Boqir, local leader long at top of hitlist. After brutal crackdown, GBAO region’s inhabitants fear they will be living under a securitised surveillance state.

After seizing the country’s most profitable mine, Kyrgyzstan is using new regulations to drive out more private mining companies and place the bulk of the industry into the hands of a single state firm.