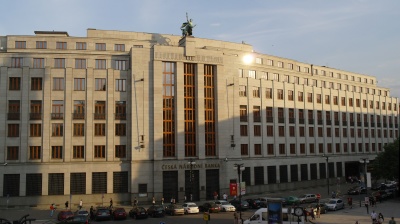 The CNB said the withdrawal of ERB's licence was driven by the bank’s “dysfunctional management and control system”.
By bne IntelliNews October 24, 2016

The Czech National Bank (CNB) announced on October 24 that it has revoked the licence of European-Russian Bank. The Russian-owned lender was prevented from opening new business earlier this year, and then officially reported to be unable to meet its obligations by the central bank in early October.

Speculation has been rife since the limit was placed on new business in March that ERB may be struggling because of EU sanctions and the recession in Russia, while there has also been speculation of fraud at ERB. At the same time, the bank is also thought to have been involved in helping Moscow fund populist political parties in the EU; a tactic viewed as intended to sow discord in the bloc, which is in a tense standoff with Russia over Ukraine and Syria.

The CNB said the withdrawal of the licence was driven by the bank’s “dysfunctional management and control system”. The central bank will submit a petition to a Czech court to appoint a liquidator. ERB may now only operate activities required to settle claims and liabilities.

The regulator also appeared to support reports that it suspects ERB of having sold fake bonds and moved the capital to tax havens. A criminal complaint against ERB on the back of a probe by anti-corruption police was launched in March, according to local press. In a statement, the CNB said the “purchase of bonds in conflict with the law” was another major issue motivating the withdrawal of the licence.

The CNB says it “has found serious deficiencies, particularly in the management of credit and market risk and liquidity risk that threatens [ERB’s] stability. Bad credit risk management had a negative impact on the credit portfolio of the bank.”

The CNB reported that ERB was unable to meet its obligations on October 11. That followed press reports the previous day that clients were unable to access funds. The state deposit guarantee system began distributing client refunds on October 20. Under the €100,000 limit, all clients should be repaid, the CNB notes.

The CNB statement also notes concerns over information security. In addition, ERB has not been policing its systems sufficiently to prevent money laundering, the central bank claims.

ERB's corporate business is led by the financing of Czech exports to Russia. In retail it serves mainly Russian clients, although it has targeted Czechs with high-interest savings products.

The bank’s vice chairman, Anton Suckova, admitted to local press in February that ERB was looking to diversify because of the effect of EU-Russia sanctions on its business. In particular, he noted ERB's business funding trade between the Czech Republic and Russia had deteriorated to the point that the bank was drawing up a new strategy.

He also denied recent allegations that the bank has acted as an intermediary in Russian funding of political parties in the EU. Speculation that ERB is connected to Russian oligarch Gennady Timchenko, who has close links to the Kremlin and is one of the biggest names on EU and US sanctions lists, is also untrue he insisted.

Active in the Czech Republic since 2009, ERB is one of the smallest players on the market, with total assets of around CZK7bn. Owner Roman Popov, who used to work for Stroitransgaz – a pipeline contractor now held by Timchenko - is also the sole shareholder at First Czech Russian Bank. The small Russian-based bank supplied a €9mn loan to France's far-right National Front in 2014, according to Bloomberg.

Moscow back on lockdown as coronavirus infection rate surges again
8 hours ago
Lukashenko pushing illegal Iraqi refugees over the border into Lithuania
8 hours ago
Belarus is the “North Korea” of Europe, says US diplomat
3 days ago
European commissioner confirms €30bn EU investment plan for Western Balkans
3 days ago
Merger between Moneta Money Bank and Air Bank in trouble after proxy firms come out against
3 days ago