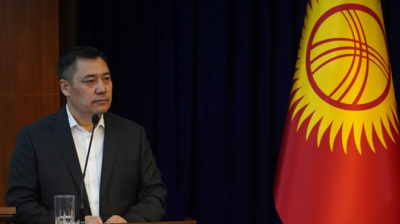 Sadyr Japarov is an avowed nationalist who once backed a campaign to demand the nationalisation of Kumtor, the country’s largest gold mine.
By bne IntelIiNews October 12, 2020

Sadyr Japarov, a convicted kidnapper sprung from prison during the turmoil in Kyrgyzstan last week, on October 10 claimed to have been appointed as the country’s prime minister by an emergency rump session of parliament that relied on nine votes by proxy to reach a quorum.

“Granting an MP permission to vote on another’s behalf, however, requires the presentation of a relevant power of attorney, and no evidence is forthcoming that any such documents have been produced,” noted Eurasianet in its report of the claimed appointment of Japarov, an avowed nationalist who in 2017 was sentenced to more than 10 years in prison on kidnapping-related charges.

The emergency session of the parliament was attended by fewer than half its members.

RFE/RL reported that lawmaker Aida Kasymalieva said on October 11 that she left the session in order to prevent a quorum and forestall a vote on Japarov’s candidacy, but that her vote had been cast illegally. “We are preparing documents now to appeal to the courts,” she told the news service, adding that parliament staff had not responded to her request for a list of lawmakers who voted for Japarov’s appointment.

Eurasianet also observed that the “rapid ascendancy” of Japarov—who now stands to also serve as acting president if, as many observers anticipate, incumbent Sooronbay Jeenbekov shortly resigns, given that the speaker of the parliament, who would normally take the stand-in role is no longer in post—“has hinged entirely on a strategy of intimidation executed by hordes of aggressive supporters bussed into the capital, Bishkek”.

The anointment of Japarov as head of the government followed jarring events that occurred on October 9 when a coalition of political leaders opposed to his candidacy assembled thousands of their supporters and unaffiliated anti-organised crime demonstrators for a rally on Ala-Too Square in Bishkek. Around half an hour after the gathering got under way, it was attacked by Japarov supporters throwing fists, stones and bottles, according to Eurasianet’s reporter at the scene.

As one leading figure in that rally, former president Almazbek Atambayev, was being driven away from the unrest, a man reportedly fired several rounds from a pistol into his car.

There were claims from those at the scene that the shooter was a supporter of Japarov but Japarov has claimed that he was actually the ex-president’s own bodyguard.

Hours before the move to make Japarov PM, Atambayev, who was also freed from prison by supporters during Kyrgyzstan’s upheaval last week, was arrested by government forces at his country residence on charges of instigating the unrest of October 9.

Japarov told media outlets after he was nominated prime minister that he met with Jeenbekov—in hiding ever since the country’s crisis began with angry protests at the alleged fixing of its parliamentary elections—to discuss the steps to come. “We agreed that [after I am nominated prime minister], within 2-3 days, he will sign a letter of resignation,” he said.

Japarov first became known in Kyrgyz politics after the overthrow of President Askar Akayev in March 2005. He went on to join the Ak-Zhol party of president Kurmanbek Bakiyev to whom he became an adviser. Bakiyev was overthrown in 2010. Also in that year, Japarov became prominent in the Ata-Jurt party. A couple of years later he backed a campaign to demand the nationalisation of Kumtor, the country’s largest gold mine, then as now operated by a Canadian company. “That led to the most notorious incident in Japarov’s biography,” noted Eurasianet. “In 2013, he whipped up unrest in the town of Karakol that culminated with his associates kidnapping Issyk-Kul governor Emil Kaptagayev and subsequently using him as a hostage during a standoff with the authorities.”

It appeared that Japarov would be disqualified from filling the prime ministerial post given his criminal record. But there has been some action at the Supreme Court. The court stated on October 9 that criminal charges against Japarov were being reviewed. Japarov has said that the charges that landed him in prison were politically motivated.

Japarov has announced a 10-point programme aimed at restoring stability in Kyrgyzstan. It includes protecting investors, ensuring food security, and “bringing to justice all officials involved in corruption".

Erica Marat, an associate professor at the National Defense University in Washington, told RFE/RL that Jeenbekov and Japarov will continue to face political headwinds.

"The grassroots mobilisation isn't going anywhere. There will continue to be protests and attempts to at least hold another round of elections, now free of voter buying," she said, adding: "There is a critical mass of pro-reform politicians that will continue to challenge the status quo again and again."