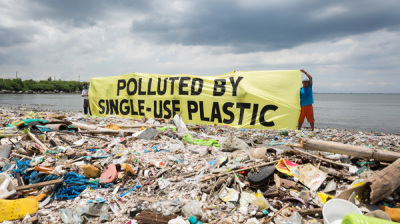 Three quarters of all plastics every made are currently already waste
By Calin Corjan in Montreal May 13, 2019

Plastic is one of the most essential materials we use every day, characterized by an unparalleled versatility that has led to a steadily growing demand for plastic products globally. It is widely reported that annual global production of plastics has increased dramatically, from 15mn metric tons in 1964 to over 350mn metric tons currently; and, because plastic is so economical, versatile and reliable, its production growth is expected to continue surging for at least the next decade.

The dark side to this wonder material--pointed out in a report titled Solving Plastic Pollution Through Accountability, published March 2019 by the Switzerland-based World Wide Fund For Nature (WWF)--is the environmental threat posed by the egregious amounts of plastic waste that have accumulated over the years, and that will likely continue to increase unabated.

“Plastic is not inherently bad; it is a man-made invention that has generated significant benefits for society. Unfortunately, the way industries and governments have managed plastic, and the way society has converted it into a disposable and single-use convenience, has transformed this innovation into a planetary environmental disaster. Nearly half of all plastic products littering the world today were created after 2000. This issue is only decades old, and yet over 75% of all plastic ever produced is already waste. Due to waste mismanagement, one-third of plastic waste is estimated to have entered nature as land, freshwater or marine pollution.”

Fortunately, there is a viable technology that is now ready to help deal with this expanding crisis, and it may be available soon in Eastern Europe because of insightful early investments made by group of investors. I was an early venture investor in the Montreal-based and Nasdaq-listed Loop Industries, Inc., and was given the opportunity to put this much-needed technology in place to work in Eastern Europe.

First founded as a private Canadian firm in 2012 by Daniel Solomita, Loop became a US public company in June of 2015. Solomita has served as Loop’s President and CEO from startup to the present. He has been involved in the plastic recycling sector since 2009, when he was engaged in landfill remediation projects in the US, recovering large quantities of nylon for reuse – and nylon is particularly hard to recycle or reuse. While working on these projects, It became apparent to him that plastic would be far more environmentally friendly if it were efficiently recycled, as opposed to the single-use, throwaway, waste-creating mentality that has plastic littering the landscape of our planet today.

Solomita began experimenting in a makeshift lab in his garage, teaming up with Tunisian chemist Dr. Hatem Essaddam. Eventually they discovered a process for chemically depolymerizing PET, one of the most widely-used plastics, using no added heat or pressure. The resulting component monomers could then be re-polymerized into high-grade PET resin, with all additives and impurities removed. Another big problem would-be recylcers face is removing dye from plastics is also extremely difficult. Solomita and Essaddam  process was a true breakthrough.

Their initial de-polymerization process utilized what is now known as Loop’s Generation 1 technology. The company’s first pilot plant, located in Terrebonne, Quebec, Canada, demonstrated the efficacy of that technology.  Persistent research and development, however, led to the development, in 2017, of an improved de-polymerization process, utilizing Loop’s Generation 2 technology, which eliminates the use of water and chlorinated solvents from the purification process, and also significantly reduces the number of necessary reagents and purification steps.

Loop subsequently built an industrial pilot plant designed to demonstrate the efficacy of its Generation 2 technology. That plant, also located in Terrebonne, became operational in June of 2018, showcasing the economical de-polymerization of PET plastic with zero energy input.

The importance of this singular achievement has been recognized by leading global consumer goods companies. During 2018, PepsiCo, Coca-Cola European Partners, Danone and L ‘Oreal all entered into multi-year supply agreements for 100% recycled Loop PET.

Loop has gone to great lengths to protect its breakthrough intellectual property. It holds patents on its Generation 1 technology and has patents pending on its Generation 2 technology in the US and the European Union, as well as in other jurisdictions worldwide. In addition, the company maintains rigorous confidentiality controls.

In December of 2018, Loop entered into a Global Alliance Agreement with a ThyssenKrupp AG subsidiary, bringing together ThyssenKrupp’s PET Melt-to-Resin technology and Loop’s Generation 2 de-polymerization technology. Because ThyssenKrupp is a global leader in PET and polyester production engineering, it is perfectly suited to help drive the commercialization of Loop’s Waste-to-Resin (WtR) solution by engineering fully-integrated, greenfield manufacturing facilities for the production of Loop PET resin and polyester fibre.

Loop’s potential benefits for eastern Europe are enormas. For decades we have known that plastic is convenient, inexpensive and durable. But unless the large volumes of plastic waste we have created are responsibly managed, the plastic pollution crisis will only get worse. When I saw and then vetted the Loop recycling process, I knew that we now have a sustainable, cost-effective and scalable solution to the plastic pollution problem, ready for deployment worldwide.

I invested in Loop Industries knowing that systematic global plastic pollution needs our urgent attention. I’m excited to be an early investor that helped enabling the development of Loop’s technology. The reason for me being a part of this project is not only to maximum the returns of my investments, but mainly to maximize the conservation outcomes. I would like to contribute to the creation of a better word for our children, but I understand that philanthropy is just not enough to achieve it. Most importantly, I am highly optimistic about the potential opportunity to expand Loop’s positive footprint into this region of the world.

The March 2019 WWF report called for collective global action. Governments and private-sector entities, at all levels, working together in good faith, must demonstrate leadership by transparently and responsibly addressing the systemic drivers that perpetuate the plastic crisis. Accountability is essential to ending the crisis, ensuring the adoption, at all levels, of best practices that deliver long-term economic, societal and environmental benefits.