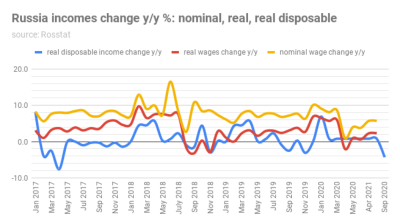 Russia's real disposable income – the money people actually have to spend on themselves – has gone negative again in September, down 5%. Suggest the economic recovery will slow from here / bne IntelliNews
By bne IntelliNews October 26, 2020

Economic development was mainly supported by the service sector and primary production, but their recovery also slowed in September, the Bank of Finland Institute for Economies in Transition (BOFIT) said in its weekly update.

In the other main industries, the development weakened in September. According to the forecast of the Russian Ministry of Economy, Russia's GDP contracted by 3.8% in July-September and by 3.5% year on year in January-September.

In the light of the new figures, industrial production contracted by only 3% y/y in January-September, almost 2 percentage points less than previously estimated. In particular, production of machinery, equipment and means of transport has declined more moderately than previously estimated. Such a major revision is also likely to raise GDP slightly in the early part of the year.

Agricultural production continued to grow in September, as throughout this year, but growth slowed to 1%. Construction output remained at the same level as a year earlier. In recent months, however, housing construction seems to have become the driving force behind construction output, growing by 6% y/y in July-September after a sharp drop in the spring.

As bne IntelliNews reported there is currently a boom in residential housing construction driven by the government’s highly successful mortgage subsidy programme.

Developments in the labour market were mixed. Unemployment started to fall slightly in September and the unemployment rate was 6.3%.

In contrast, real wage growth stalled as early as August, from which the latest wage statistics derive. Household real disposable income decreased by 5% y/y in July to September. Revenue statistics were revised downwards in September for the whole of this year. Indeed, the purchasing power of Russian households is still at a lower level than a decade earlier.

Romania’s public debt hits 50% of GDP at end-May
The birth of a Kazakh banking empire: ATF Bank
Russian GDP contracted by 4% y/y in the second quarter of 2022

Romania’s public debt hits 50% of GDP at end-May
5 hours ago
Hungary's automotive industry continues to rebound in June
1 day ago
Russian GDP contracted by 4% y/y in the second quarter of 2022
1 day ago
Serbia’s annual inflation accelerates further to 12.8% in July
1 day ago
Poland’s CPI growth rate picks up just 0.1pp to 15.6% y/y in July
3 days ago