COMMENT: The Warsaw ministerial on the Middle East: A new dimension of solidarity 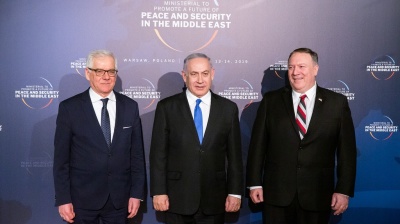 Israeli and Arab leaders met in Warsaw to discuss security in the Middle East, the first such summit in a quarter of century
By Maxim Mikheev research associate at the Dialogue of Civilisations in Berlin February 16, 2019

On February 13-14, the “Ministerial to Promote a Future of Peace and Security in the Middle East” conference was held in Warsaw at the initiative of Poland and the United States, and gathered representatives from 62 countries.

The two-day conference was announced by US Secretary of State Mike Pompeo in January 2019, and originally carried the more aggressive title of “Countering Iran”. This was toned-down at Poland’s insistence, to convey the vaguer goal of seeking stability in the Middle East.

The meeting was hailed as a breakthrough by US Vice President Mike Pence, as it was the first time since the 1991 Madrid peace conference that an Israeli leader sat down with senior Arab officials (from Bahrain, Saudi Arabia, and the UAE) at an international gathering centred on the Middle East. The Madrid meeting set the stage for the landmark Oslo Accords between Israel and the Palestinians.

Israeli Prime Minister Benjamin Netanyahu also hailed the meeting as a significant advance, but brought the focus back to Iran.

“Yesterday was a historic turning point. In a room of some 60 foreign ministers and representatives of dozen of governments, an Israeli prime minister and the foreign ministers of leading Arab countries stood together and spoke with unusual force, clarity and unity against the common threat of the Iranian regime,” Netanyahu said.

However, despite Netanyahu’s rhetoric, the agenda largely avoided the issue of Iran and was officially focused on more mundane topics including: regional crises and their effects on civilians in the Middle East; missile development and proliferation; cyber security and emerging threats to the energy sector; and countering extremism and illicit finance.

Nevertheless, it is obvious that the main purpose of the event was to increase pressure on Iran – which was not invited to participate – and coordinate the actions of countries supporting the US anti-Iranian course. Even the date chosen for the conference is symbolic: a few days after Iran celebrated the 40th anniversary of the Islamic revolution.

The content of the discussions was light, but the mere fact that the meeting took place severed the interests of most of the groups involved. The US bolstered its anti-Iran alliance in the Middle East. Israel confirmed its close ties to and support of the US against possible aggression from its neighbours. And the Arab states signalled their unity against regional rival, Iran.

The meeting was also a foreign policy victory for Donald Trump, who is currently embattled on all sides at home and abroad.

But above all, the conference was a manifestation of close allied relations between the United States and Poland. Depending on the point of view, though, one could say that Warsaw was chosen as a neutral platform for discussing issues related to the Middle East. Like the US, Poland has also found itself at loggerheads with the EU over its increasingly illiberal policy agenda and hosting the US-lead conference was a tart reminder to Brussels that Warsaw values its independence.

Whatever agendas the participants came to Warsaw with, the net result of the meeting was to shore up the US’s desire to consolidate Israeli and key Arab countries’ positions towards Iran. It was also a step towards the attempts of the US to create an “Arab NATO,” which so have far been unsuccessful. The animosity between Israel and the Arab states runs deep, but for once the White House scored a diplomatic success, as Iran is one of the very few issues these factitious parties can unite around.

For Europe, the Iranian has become very uncomfortable, forcing it into confrontation with its long-time ally the US.

That also leaves Poland in an awkward position, as by hosting the meeting it pushes the wedge that has already appeared in Warsaw’s relations with Brussels a bit deeper, and further undermines the increasingly fragile European unity. The Polish leadership clearly intended to thumb their nose at Brussels by hosting this meeting, but others have also bluntly said that this event is a US attempt to split Europe.

Russia also did not attend the Warsaw meeting. In Sochi on February 14, Russia received the Astana troika summit dealing with the Syrian crisis, which is indeed another symbolic “coincidence.”

It is impossible to talk about the formation of opposing coalitions in Middle Eastern crises. ut the total lack of a commensurable, if not unified, visions of how to address Middle Eastern conflicts radically reduces the chances for settlements to the conflicts – be it Syria, Yemen or the Palestinian-Israeli discord.

But some concrete proposals did come out of the Warsaw meeting. The Ministerial co-chairs have set ambitious goals. They called for the launch of the “Warsaw Process,” which would contribute to the normalisation of the overall situation in the Middle East. The future is going to reveal whether they are able to realise these ambitions in practice.

Israeli Prime Minister Netanyahu – with his harsh anti-Iranian rhetoric – appears to be the main beneficiary of the meeting, gaining support from several influential actors at once. Obviously, he will continue to push his anti-Iranian agenda next week, when on February 18-19 he accepts the leaders of the Visegrad Four in Jerusalem.

In the joint statement on the results of the Ministerial, its co-chairs announced the launch of international working groups that will continue to work on respective regional issues. In order to become effective though, these working groups would need to become more inclusive. Any attempt to overcome the various crises in the Middle Eastern requires the presence of actors from the countries where the conflicts are taking place. At the same time, the US is clearly not ready for a change in their current regional policies. As Mike Pompeo said during the Ministerial: “You can’t achieve peace and stability in the Middle East without confronting Iran.” However, by excluding Iran and making it a pariah state, it is hardly possible to achieve the official goal of the Warsaw meeting: “to promote a future of peace and security in the Middle East.”

Maxim graduated from the history department of the Moscow State Lomonosov University, specialising in the history and theory of International Relations. Maxim focuses on studying the current evolution of the international system as well as on Russian-Western relations. Alongside international relations, his research interests include nationalism and identity issues.