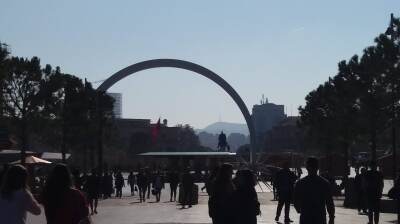 The electoral campaign for the April 25 elections in Albania brought to light one of the biggest political scandals the country has experienced in recent years.

Investigative reporting by online media outlet Lapsi.al revealed that the ruling Socialist Party, led by Prime Minister Edi Rama, has created a database containing all the personal data of the citizens of the Republic of Albania, using data from state institutions, mainly from e-Albania, a website and smartphone application used to facilitate document requests, and more recently used by almost everyone to obtain permission to go out for various reasons (either work or personal) during the pandemic lockdown.

This database includes information about voters' employment history, their religious beliefs, tax returns, telephone numbers, email addresses, social security numbers, sexual orientation and medical records, as well as comments such as: this voter recently asked if his sister or wife can be employed in a state institution; is a friend of…; doesn’t have a good relationship with… It even tracks their comments and likes on Facebook.

More importantly, it was made clear to the public that every single Albanian citizen was under the “patronage” of a trusted Socialist Party member, who apparently were called “patronagists”, and whose primary duty was to scrutinise and “keep an eye” on the people they had under their “patronage”.

Rama initially ignored the news, then admitted that this “patronage” system was designed by the Socialist Party to collect information on its supporters. After the election, when it became clear that the party he leads had won, Rama said “the ‘Patronagists’ have done a very good job” and invited them to come to Skenderbej Square to celebrate the party’s victory, ending all doubts as to whether the government was monitoring the social and political life of the citizens.

The theft of personal data for political reasons has sparked outrage from citizens who feel violated by the state. In a democratic system, citizens receive security and support from state institutions.

"I am scared… it is terrible that someone owns all my information, I had never imagined that I was under observation and monitoring,” Erinda, a 30-year-old resident of Tirana, told bne IntelliNews.

“When the government steals my data, to whom should I turn as a citizen? Where should I file a complaint? In court or in the prosecutor's office? These are also state institutions. We have returned to communism,” said Eva, a 21-year-old student at the Faculty of Economics in Elbasan.

The existence of this database containing so much data is a political crime. In Albania, memories of the communist regime are still fresh. State security monitored all citizens, seeking information about their relationships with family, cousins, colleagues and residents of the area where they lived. State security did such a good job that citizens were afraid to express their opinions. It seems like we are in the same situation today, when you are not free to express your opinion because the person who “patronises” you keeps you under surveillance and is informed about everything that happens to you. All this information will one day enable the government to decide whether to help you or not — help here meaning anything from being employed in an institution to getting a license for something. Now Albanians fear all these decisions will depend on their behaviour or whether they have expressed any dissatisfaction with the state.

The owner of a travel agency, Erion Mane, went public on the issue, saying he has been repeatedly and unjustly fined. He asked for help with his problem from one of the relevant directorates at the Ministry of Transport and staff initially promised to help him. Then one of the directors of the ministry sent the businessman a screenshot of a post he had made on Facebook several months earlier, where he had shared a photo of the chairwoman of an opposition party. A press release issued jointly by Mane and President Ilir Meta — a strong critic and political opponent of the Socialist Party — argued that Mane did not receive any help from the state because he was “patronised” to monitor his political orientation and keep him under control. This is one of many cases of a business that does not support the government being financially penalised and pushed towards bankruptcy.

For Albanians, it is scary to think that someone out there has been asking, investigating, following, eavesdropping, both in real life and on social media, for years, about you. The “patronagist”, in addition to knowing where you live, with whom you live, what you do in your free time, who your friends are, who your partner is etc, also checks your social networks like Facebook and Instagram, where he or she screenshots your posts or messages to keep a record of your thoughts and actions.

This scandal reminds me of my grandfather's story about the centralisation of socio-political life under the party-state, where everyone knew everything about everyone, and you could be fired or imprisoned for political reasons. Nowadays the state fines you, tries to make you close your business and in general makes life very very hard for you for political reasons.

Having no institutions to complain to, many citizens have denounced the phenomenon of “patronage” on their social networks and some of them have even invited their “patronagists” (who often are acquaintances or neighbours) to meet in order to get to know the person who has been stalking them for years. The theft of personal data from the state cannot be left only to denunciations on social networks when the government accepts and publicly thanks the “patronagists” for a “job well done”.

The existence of this database will negatively affect the Albanian accession process to the European Union. Lacking trust in local institutions, citizens and various organisations have sought help from various institutions located in Tirana, such as the offices of the European Union, OSCE-OHDIR and the US embassy, hoping that these will hold the Albanian government to account and ask the government to delete this database.

COMMENT: Sanctions are working, but the West risks isolating Russian reformers instead of galvanising them
1 day ago
NEMETHY: Where are US markets? Where are they heading?
1 day ago
COMMENT: Constanta concerns
7 days ago
Sberbank faces a meltdown from its vast commercial real estate loan book
10 days ago
STOLYPIN: The sick man of Europe
11 days ago