Gazprom has never been known as the most nimble company in the world. In addition to its energy assets, Gazprom famously has business interests in a bewildering array of different fields, including finance, construction, advertising, insurance and media. It is, generally speaking, rather more difficult to find a part of Russia’s economy where Gazprom doesn’t have a significant presence than one where it does.

It is also common knowledge that the company spends lavishly on various kinds of socially beneficial projects like sports and healthcare facilities. This welfare policy by proxy has echoes of the Soviet tendency to provide social services not through state institutions but through individual enterprises, and, as you might imagine, doesn’t’ do anything to make Gazprom produce better returns for its shareholders

From personal experience the above paragraphs highlight where most Westerners imagine the company’s inefficiency originates. We wouldn’t expect Shell or ExxonMobil to be terribly profitable if they also had a whole constellation of unrelated, and often loss-making, enterprises attached to them, nor would we be terribly surprised if forcing such companies to run social programmes had a big negative impact on their bottom lines.

The Western business world is (rightly, in my humble view!) focused on specialization, on allowing companies to focus on what they do best while either divesting from or outsourcing the rest. Oil and gas companies, then, should focus their efforts on locating, capturing, transporting and selling oil and gas, and should leave everything else to other players.

The thing is, when you look at Gazprom’s financial statements what jumps out at you is that, in comparison to other large diversified energy producers, the company spends enormous amounts of money on building and maintaining its physical infrastructure. Consider the following chart, which looks at the average level of capital expenditure from 2012-2014 for Shell, BP, Total, ENI and Gazprom. 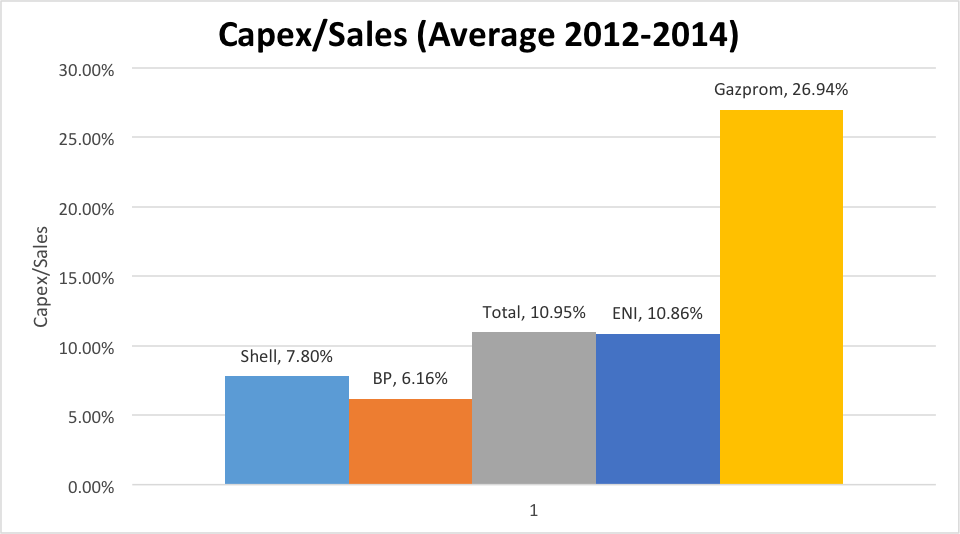 As should be clear, Gazprom is extremely far outside of the range of other oil majors, which tend to cluster in the 7-10% range (BP’s capex figure is somewhat depressed due to the need for remediation of the Gulf of Mexico oil spill)

While it is true that energy is known for being a highly capital-intensive enterprise, I don’t think I’ve ever seen a company in any industry that has a capital investment profile larger than Gazprom’s. On average, over the past several years, Gazprom has spent more than one quarter of its net revenue on capital investment. For every four rubles it takes in, it spends one ruble on pipelines, processors and other equipment.

Over the past several years Gazprom has made some progress in bringing capex under control. To a significant extent it’s been forced to, by plunging prices for natural gas and for forecasts which suggest these low prices look increasingly like the new normal. Gazprom’s leadership has long been quite open in its disdain for shale gas, but their actions suggested that they were taking this threat more and more seriously. By 2014, spending was “only” 22.6% of revenue, still a long way off from its other European peers, but heading in the right direction and more than 10% lower from the 2011 level. 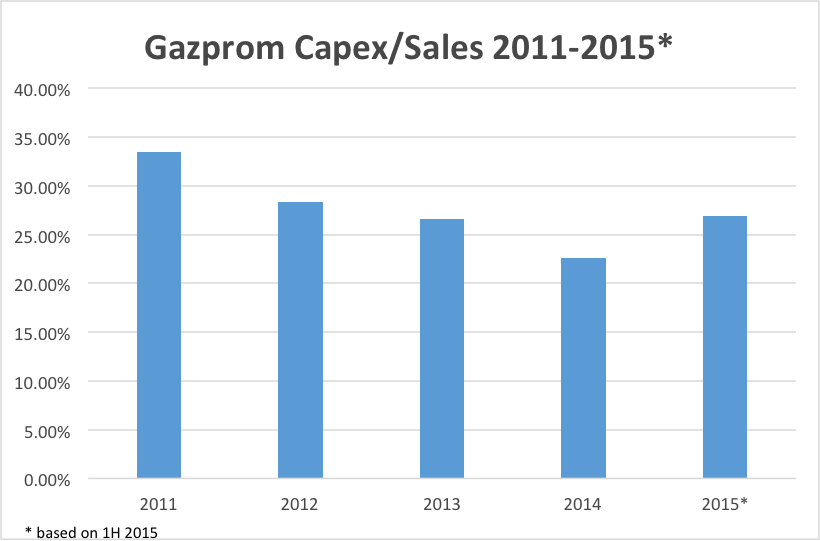 However, in 2015, whatever tentative progress Gazprom was making seems to have reversed. Measured as a percentage of sales, the first half of 2015 saw capex increase by about 25% in comparison to the year-earlier period. Recent headlines also suggest that Gazprom hasn’t yet kicked its capex addiction, with plans for a Nord Stream II pipeline (the economic utility of which is extremely dubious) advancing at a reasonable clip.

A plausible defence for Gazprom could be that because its assets are largely comprised of legacy Soviet equipment and because it operates in such extreme climates, it needs to spend heavily on capex simply to keep the lights on. While plausible, Gazprom’s own financial statements provide no support for this hypothesis: from 2012-2014, capex was more than three times larger than the depreciation and amortization that were recorded on Gazprom’s existing assets. Gazprom is not just paying to replace what it has, it is aggressively acquiring an ever-larger quantity of physical property, plant and equipment (which, given the extremely slow growth in revenues, is not being used very efficiently).

The above helps illuminate why Gazprom is “undervalued”: it burns almost all of the cash it generates buying more stuff, instead of paying out dividends to shareholders or buying back its stock. Enormous value could be generated if Gazprom started to operate more in line with Western energy majors; it could likely reduce its capital expenditures by more than 50%. But there is little evidence that the company has moved past its excessive focus on acquiring assets.