Ed Lucas, The Economist's former Moscow bureau chief and a long-time observer of all things Eastern European, made headlines when he became the very first official "e-resident" of Estonia. Estonia's e-residency initiative (often called "e-citizenship" by other news outlets) allows foreigners to obtain access to many of the same e-services available to actual, physical residents of the country without having to actually become citizens.

While some of the more excitable and boosterish commentators will state that this is an effort to “disrupt the nation state”, in reality it seems to be a much more quotidian and basic attempt at economic development. By allowing foreigners ready access to Estonia’s low-tax, low-regulation and generally friendly regulatory environment, the hope is to encourage business formation, investment and job creation.

Indeed, when you look beyond the over-hyped headlines, one quickly learns that there are a number of significant hurdles to the supposedly utopian idea of online “citizenship”. Applicants for e-residency must apply, in person, at an office of the Estonian border police. They must also be physically present in Estonia to pick up their official e-residency card. So, no, you won’t be able to become as Estonian e-resident from the safety and comfort of your basement purely using the magic of the internet: you will actually need to pay for a plane ticket to and from Tallinn. Boring old paper forms and annoying visits to government offices, unfortunately, haven’t been replaced yet, even in “E-stonia.”

All in all, of course, Estonia’s programme ought to be cheered. Anyone who has waited in line at the local DMV or who has any experience with the often mind-bending inner workings of government offices will understand the intuitive appeal of e-residency, even if they can’t actually be bothered to fly to Estonia and actually obtain it. To the extent that Estonia’s programme puts pressure – even a little bit of pressure – on other governments to get their act together, it is an unalloyed good.

But in that boring old state known as “reality”, Estonia’s penchant for innovation hasn’t been reflected in its population dynamics.

The country has actually been losing people at a rate that is proportionally far faster than that of supposedly stagnant, dying Russia. And unlike in Russia, which has actually grown over the past six years, Estonia’s depopulation has shown no real signs of reversal (in 2014 there was a modest decrease in emigration, but the natural rate of change actually deteriorated slightly). Even as its government has reached new heights of efficiency and flexibility, Estonia’s population has continued to relentlessly tick downwards. 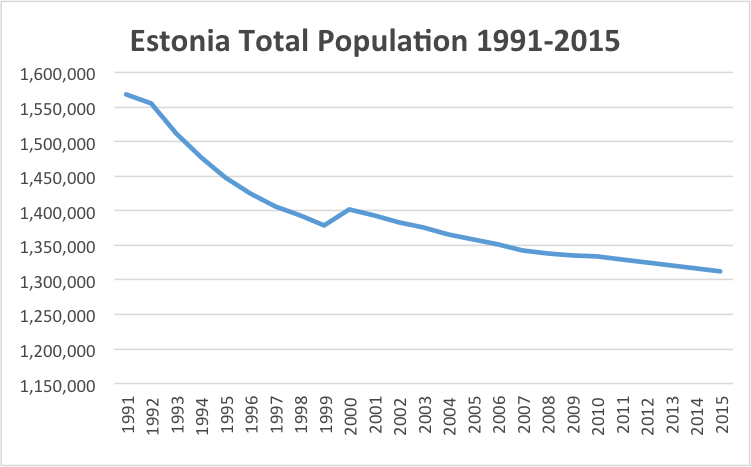 Reading coverage of Estonia in The Economist or other business-friendly publications, one inevitably comes away with the idea that foreign entrepreneurs are flocking to the country to take advantage of its flexible, hands-off government. The reality is that Estonia has had a negative net migration balance every year for the past 15 years: at no point has it ever attracted more people than it has lost to other (primarily European) countries.

Estonia is in desperate need of more workers, entrepreneurs and businessmen, but it has done a terrible job of attracting them. The e-residency programme, while laudable for its bureaucracy-minimizing potential, is a poor substitute for a policy approach that succeeds in attracting real flesh and blood people.

When evaluating the attractiveness of a given country, a good rule of thumb is to “follow the people”. The US, for all of the sputtering outrage it sometimes summons, has always had a positive net migration balance: far more people want to move to the country than want to move away from it. For all of the success it has achieved in online registration, the same simply cannot be said about Estonia: the country has consistently lost more people than it has managed to attract. This doesn’t mean that Estonia is terrible, virtually everywhere in Eastern Europe has a negative net migration balance, but it does suggest that the solution to demographic decline lies in bread and butter issues like housing and wages far more than it does in innovation.

In other words: Estonia has a very real demographic crisis and e-solutions aren’t going to fix it.

Mark Adomanis is an MBA/MA student at the Wharton School of Business and the Lauder Institute. Follow him on Twitter @MarkAdomanis