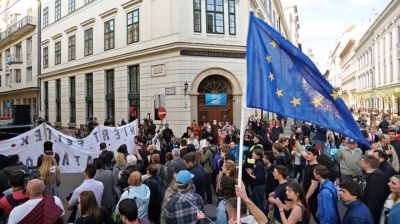 Following its troubles in Hungary, Central European University (CEU) has been granted a licence to operate in Austria as the 16th private university in the country. From 2020, the CEU will issue American degrees at its Vienna base, local media reported on July 12.

The CEU, a graduate-level, English-language university offering degrees in the social sciences, law, public policy, business management, environmental science, and mathematics was founded by Hungarian-born philanthropist and billionaire George Soros in 1991. Rector Michael Ignatieff  announced in December that the private university would relocate to Vienna. It was barred from issuing American degrees in Hungary last year.

The CEU will retain its accreditation and issue Hungarian degrees, but that still means that it will lose its appeal for international students and professors. Since its foundation more than 15,000 students of the university from over 100 countries have graduated. Ironically, high-ranking Fidesz officials such as international spokesman Zoltan Kovacs are among those who in the past attended the institution.

The right-wing conservative government of Viktor Orban began legal attacks against the university in the spring of 2017. The strategy fitted well into its intimidation campaign waged against NGOs, migrants and independent media.

The CEU, widely regarded as the “crown jewel” of the network connected to Soros in Hungary, seemed to be the perfect target for the government's hate campaign develope3d after the inflow of illegal immigrants in 2015.

The migrant crisis allowed Orban to thematise public discourse and constant fear-mongering helped his party to a third sweeping poll victory in the 2018 elections.

The government has repeatedly accused Soros, who has spent millions backing organisations that promote liberal democracy and open borders in Europe, of plotting to destabilise the continent by allowing millions of migrants to settle.

The CEU was the prime target of a 2017 regulation on higher education that tightened rules governing the operations of foreign universities. It required the universities to operate on the basis of an interstate agreement and to run a campus in the country in which they are based.

The university opened a small academic site and began offering classes in conjunction with Bard University, a liberal arts school based in New York, state last year. The government said the "Soros university" did not meet the requirements of the new law and failed to ratify the agreement, which would have allowed it to operate legally in Hungary.

The EU has launched an infringement procedure against the government over the contested amendment in the higher education act, which paved the way for the expulsion of CEU.

In May, the Technical University of Munich (TUM) and CEU signed an agreement on cooperation. The academic curricular activities would include joint seminars, workshops, summer schools, as well as course-based programs potentially leading to joint certificates and degrees accredited in Germany and the US. The Hungarian university is set to receive funding from Bavarian companies.

The two universities called on the government to provide legal guarantees for academic and scientific cooperation between them.

The agreement was signed after the European People’s Party (EPP) suspended the EPP membership of Fidesz in the spring.

EPP leader Manfred Weber set three conditions Orban must meet if he wants to prevent Fidesz from being thrown out of the right-wing bloc. One of these was that CEU has to remain in Hungary. No information has emerged in the last few months on the government’s position concerning the agreement between the Bavarian university and CEU and its future in Budapest.