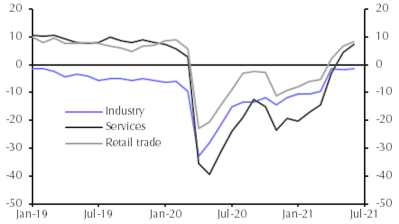 The latest set of Economic Sentiment Indicators (ESIs) released by the European Commission show sentiment continued to rise in the bloc’s eastern members in June.

However, analysts from Capital Economics warn that there is “continued evidence of growing price pressures in the region”, citing firms’ reports of higher selling price expectations.

Across the 10 countries in the region, the headline ESIs increased across the board compared to May with the exceptions of Romania and Lithuania, where there were modest declines.

Most countries in the region, such as the Baltic states, Poland, Hungary and Croatia, have seen sentiment gradually improve over the last few months. Elsewhere, like Czechia and Slovakia, there was a sudden leap in June.

Czechia’s ESI, which achieved the strongest month-on-month increase across the region, soared from 99.4 in May to 106.1 in June, a 27-month high. Meanwhile, Slovakia’s ESI reached its highest level since May 2018.

Capital Economics wrote in a note that its GDP-weighted measure for Central and Eastern Europe rose from 104.1 in May to 105.4 in June.

"That took it to its highest level since March 2019 and suggests that the recovery in activity continued at the end of the second quarter. Admittedly, it is difficult to gauge how the survey data translate into hard activity data at the moment, but at the very least the rise in sentiment suggests that conditions have improved,” analysts said.

Broken down by sector, the increase in sentiment was driven mostly by improvements in the retail and services sectors, Capital Economics said.

“The increases were more muted than in April and May, when the most damaging virus restrictions were lifted,” according to the note. “But our weighted regional ESIs in these two sectors are now within touching distance of their pre-pandemic levels, and we expect that activity will continue to bounce back as remaining containment measures are lifted over the coming months.”

“The rise in the retail and service sectors suggests that the lifting of virus containment measures is also feeding through into higher prices in consumer facing services,” said Capital Economics analysts. “We have seen early evidence of this in the breakdowns of May consumer price data and we suspect there may be further “reopening” inflation in the coming months.”