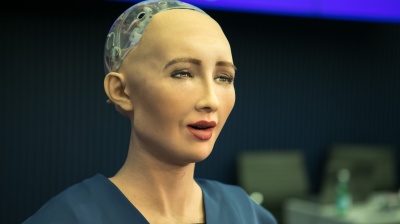 A steady increase in the number of robots shipped to CEE is expected in the coming years, IFR projections show.
By bne IntelliNews December 6, 2018

As global shipments of industrial robots reaches a record high of 381,000 last year, the pace of growth in the Central and Eastern European market outstripped almost all of the rest of the world in the uptake of robots, data from the International Federation of Robotics (IFR) shows.

Companies are increasingly investing into industrial robots to stay competitive, which has become a priority in the CEE region, especially in the fast growing Visegrad 4 economies. Robots are the answer to growing labour shortages in Central Europe that is already driving up wages and increasing inflationary pressure that is threating Central Europe’s competitiveness. Firms in the region are struggling to find workers with the skills they need.

As a historical aside, the word “robot” is a Czech invention, coined by Czech playwright and journalist Karel Čapek, who introduced it in his 1920 hit play, R.U.R., or Rossumovi Univerzální Roboti (Rossum's Universal Robots). The root of the word is from the Czech "robota" or "forced labour".

Even after attracting millions of migrant workers from abroad, especially from Ukraine, Central Europe has only partially eased the pressure and investments into industrial robots are expected to continue to rise in the longer-term. 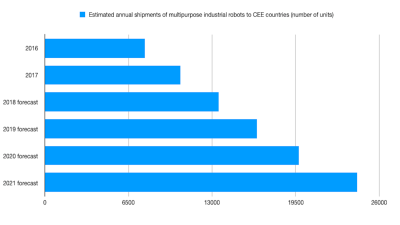 A considerable increase in robot sales has already been seen across the CEE region, the report says, with the exceptions of Romania and Slovakia — the latter somewhat surprisingly given the importance of its auto manufacturing industry, which internationally has emerged as the top investor into robots.

The latest World Robotics Report shows that shipments to the region increased by 35% compared to global growth of 30% last year. The rise in shipments of industrial robots to the CEE region is expected to continue going strong at 28% in 2018, compared to just 10% globally, followed by a compound annual growth rate (CAGR) of 22% between 2019 and 2021 (CAGR of 14% worldwide). 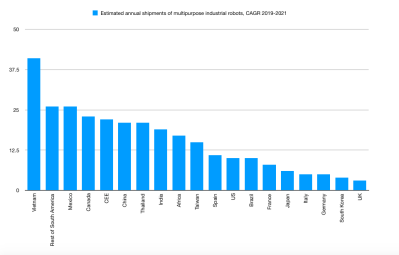 In absolute terms, the CEE market will remain small compared to those in China, the world's largest market with 290,000 robots — three times as many as all of Europe combined — projected to be shipped in 2021. Also among the top 5 markets worldwide are Japan, South Korea, the US and Germany. In value terms, the value of the market has already reached $16.2bn worth of robots were shipped in 2017, up 21% y/y and is showing no signs of slowing down.

“Industrial robots are a crucial part of the progress of manufacturing industry,” says Junji Tsuda, president of the International Federation of Robotics, in a press release.

“Robots evolve with many cutting-edge technologies. They are vision recognition, skill learning, failure prediction utilising AI, a new concept of man-machine-collaboration plus easy programming and so on. They will help improve productivity of manufacturing and expand the field of robot application,” Tsuda adds. 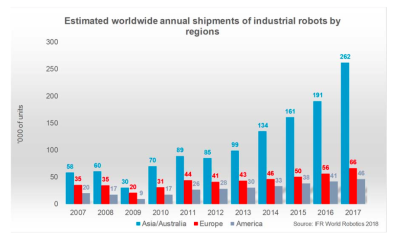 Among the different sectors, the automotive industry is the largest user of robots globally, says the IFR, accounting for 33% of the total supply in 2017, up 22% y/y.

“The manufacturing of passenger cars has become increasingly complex over the past ten years: a substantial proportion of the production processes nowadays require automation solutions using robots,” says the report.

“Manufacturers of hybrid and electric cars are experiencing stronger demand for a wider variety of car models just like the traditional car manufacturers. Furthermore, the challenge of meeting 2030 climate targets will finally require a larger proportion of new cars to be low- and zero-emission vehicles.”

This is relevant for CEE, where countries such as the Czech Republic, Hungary, Poland and especially Slovakia, have established themselves as important auto manufacturing centres.

The wider Central and Southeast Europe region is also home to numerous automotive component suppliers, which are also expected to step up their investments in robots.

Other industries such as electrical/electronics and the metal industry are also major investors into robotics. 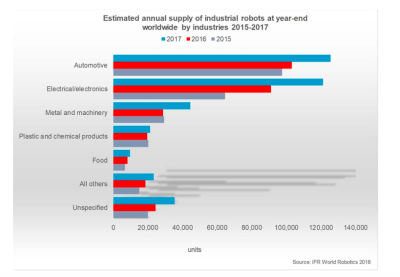 Yaskawa is in the process of opening a plant in the Slovenian town of Kocevje, which is due to be fully operational by the second half of next year. Production at the Slovenian plant will meet around 75% of demand from Europe, Middle East and Africa, the company said recently according to Slovenian news agency STA. For the rest of the robots coming from Japan, Slovenia will serve as the main distribution hub.