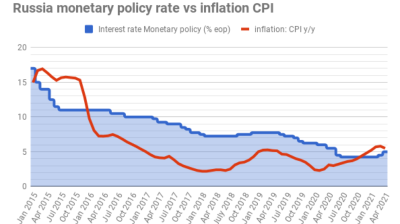 CBR Governor Elvira Nabiullina hiked rates by 50bp to 5% at the regulator's April meeting – more than analysts were expecting – but signalled she is trying to find a balance between extremes with this month's choice of brooch. / bne IntelliNews
By Ben Aris in Berlin April 23, 2021

The Central Bank of Russia (CBR) opted for a "golden mean" interest rate hike on April 23 by more than expected, increasing the rate by 50bp to 5%, its second hike of the year on the back of rising inflation and geopolitical worries. The more aggressive hike is designed to strike a balance between the two extremes of excess and deficiency, according to the brooch worn by the Central Bank governor that she uses to signal her intentions.

Analysts were unanimous in their expectation of a rate hike, but most were expecting a 25bp increase, as inflation is thought to have peaked in the last month.

Inflation has risen strongly in the first months of this year on the back of rising food prices, but also the pass-through from a steep devaluation of the ruble caused by mounting geopolitical pressure which has caused heightened ruble volatility.

From a macro-economic point of view the rate hike is considered by many as unnecessary, or at least economics alone demands a hike of no more than 25bp.

Inflation started to slow recently with consumer price inflation (CPI) dropping from 5.8% year on year in March to 5.5% y/y in mid-April.

The main reason for inflation easing has been the base effects in fruits and vegetables, as well as rising inflationary pressures in other sectors.

In non-food goods and services (excluding utilities), pressures have intensified far beyond 4%. As a result, core CPI has risen from 4% y/y to 4.5% y/y, above the CBR’s target rate of 4%.

“Higher cost-push pressures from Russia’s rapid economic recovery have run into supply-chain disruptions, which could push costs upwards both locally and globally. The current run rates imply that inflation could end 2021 at 4.4% y/y before easing to 4% in 1H22,” Alexander Isakov, chief economist at VTB Capital (VTBC), said in a recent note.

CBR Governor Elvira Nabiullina has been reacting to geopolitical pressure and surprised the market in March with a 25bp prophylactic hike to shore up the ruble ahead of the new April 15 US sanctions that targeted Russian domestic debt.

“This has nothing to do with inflation, [but] all to do with geopolitical risks. It tells me they see these remaining elevated for some time,” Tim Ash, senior sovereign strategist at BlueBay Asset Management said in a note emailed to clients.

The March increase was the first since 2018 and brought a more general easing policy to an end that has been in place since the CBR’s emergency increase to 17% in 2014 following an oil price shock that saw the ruble rate to the dollar collapse to RUB80.

The ruble recovered but has been through some wild swings since then, and weakened to RUB77.7bn the lead-up to the recent sanctions. It strengthened earlier this year to RUB73 as the post-pandemic recovery got under way, and strengthened again in the last day after Russia announced it was withdrawing its troops from the Ukrainian border to open at RUB75.4 on the morning of April 23. Following the announcement of the most recent hike it has strengthened further and was trading at RUB74.6 as of 3pm Moscow time on the same day.

Nabiullina began the year with an upbeat outlook on rate cuts, but given the rising inflation, analysts were expecting the CBR to hike rates by about 50bp over the course of the year.

But in March Nabiullina’s confidence obviously faltered and she wore a hawk brooch to the March press conference; the central bank governor has taken to wearing brooches that signal her mood at these events.

At today’s press conference she appeared to be wearing a brooch of the “golden mean,” a concept from ancient philosophy that represents a “desirable middle way” between two extremes of excess and deficiency and is the line that results from connecting the corners of tessellating boxes that double in size at each iteration. The curve also appears frequently in nature in the swirls on shellfish, for example. 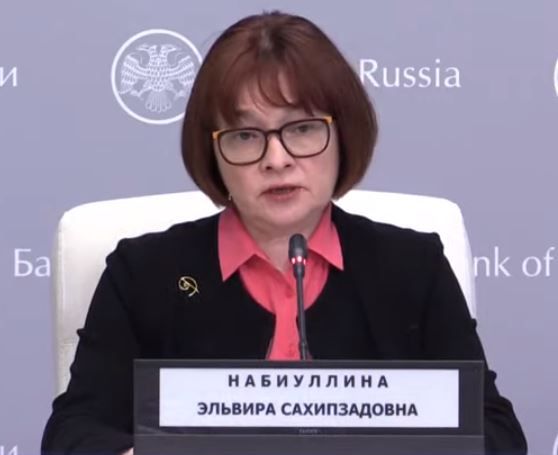 The expectation for rate hikes has increased. In addition to the 75bp already added to the rate this year, analysts are expecting around 50bp more to be added up to the end of the year, making a total increase this year of 125bp.

The big unknown remains politics. While inflationary pressures already seem to be abating, the geopolitical tensions remain high as the Kremlin manoeuvres to set the tone at the start of the new Biden administration in a diplomatic dance that is one part aggressive posturing, like the military build-up around Ukraine, and one part outreach, like Russian President Vladimir Putin’s participation in Biden’s climate summit on April 22.

In addition, while inflationary pressures are easing, the expectations for inflation amongst the population have soared to 10% this year and the CBR is afraid of these expectations becoming unanchored, which in itself sends inflation up. Nabiullina, known as the world’s most conservative banker, will apparently continue to follow a very conservative policy by hiking a little early on to avoid bigger, more painful hikes later – hence the golden mean.

The CBR also signalled that it would continue to tighten over the rest of the year. The accompanying statement strengthened the central bank’s hawkish message about the need for further monetary tightening to bring inflation back to target.

“We were among one of 13 analysts polled by Bloomberg that had expected a 50bp rate hike (28 other forecasters had expected a more modest 25bp hike),” said Capital Economics. “The central bank gave a strong signal at its meeting in March that it would tighten policy further against a backdrop of above-target inflation. Since then, the CBR’s concern about the inflation outlook has increased further.”

The CBR’s statement emphasised that the balance of risks has become more pro-inflationary due to a stronger-than-expected recovery in demand. The CBR revised up its end-year inflation forecast to 4.7-5.2% from 3.7-4.2% previously.

The statement reiterated that the central bank would consider the necessity of further interest rate hikes and that the strength of inflation calls for policy to return to a neutral stance (of 5-6%) earlier than had been anticipated.

The CBR’s new projections for the policy rate show interest rates averaging 5.3-6.3% in 2022, suggesting that a tighter policy stance is required to reduce inflation.