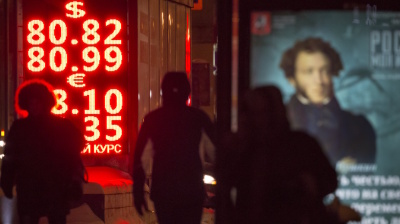 The ruble has been going through 10% swings in the last few months as it has become victim to unpredictable geopolitical tensions that change radically from day to day. / bneIntelliNews
By Ben Aris in Berlin April 15, 2021

The US imposed new sanctions on April 15 that ban US investors from participating in the primary Russian Ministry of Finance ruble-denominated OFZ treasury bills market but allow purchases on the secondary market and so will have little impact on investors.

The exchange rate reaction to the details of the new sanctions was muted and the ruble strengthened from its recent low of RUB77.7 to the dollar to open at RUB76.2 on the following morning, still slightly weaker than the RUB75.4 it touch on earlier in the week following US president Joe Biden’s offer of a summit to Russian President Vladimir Putin.

The current market quotes have already largely included not only the sanctions, but also the likelihood of tougher sanctions on the public debt market, says Sofya Donets, chief economist at Renaissance Capital for Russia. She sees the potential for the ruble to strengthen in almost any scenario: "If more significant sanctions await us in the future, if oil prices remain at the current level, it could be 74 against the dollar in the second half of 2021, if there are no new significant sanctions - 69"

Economists say that the exchange rate should be at something like RUB68 to the dollar, based purely on macroeconomic fundamentals. But Russia has always carried its very own “Russia risk” premium in addition to the run of the mill “emerging market risk” premium, thanks to its prickly relations with the West, deeply entrenched corruption and its arsenal of nuclear weapons, which come with built-in tensions that the other emerging markets don't have.

And that RUB68 level is applicable following the 2014 oil shock. Before that, the ruble was trading at about RUB35 to dollar, but the price war started by Kingdom of Saudi Arabia to try to kill off US shale production meant the Russian currency took a permanent step down in value to the greenback.

Another factor weighing on the relationship between the ruble and oil prices is the so-called budget rule that automatically sterilises any oil revenues the government earns when prices go above $42 per barrel. The excess income is squirreled away into the National Welfare Fund (NWF) and taken off the market so it cannot affect the exchange rate. The rule was briefly suspended in 2014 and again in 2020, but it is back in place now as oil prices return to around the $60 mark.

Recent political history is written large over the FX chart. After collapsing to a low of about RUB80 vs the dollar in the bowl of the coronacrisis last summer, when oil prices fell to below $30, the Russian currency staged a strong recovery as commodity and oil prices bounced back from October in anticipation of the end of the pandemic once the vaccines started appearing.

But at the start of this year the ruble was trading at around RUB74 and even strengthened a bit as it became clear that US President Donald Trump was going to lose.

FX traders had their first case of the collywobbles as they began to focus on what Biden was going to do about Russia. Biden was inaugurated on January 20, and the next day marked the strongest for the ruble in the first quarter at RUB73.3. But within a matter of days Biden gave his first foreign policy speech on February 2, which contained some tough talk on Russia, which would “be made to pay a price” for hacking and election interference. The ruble rapidly weakened, falling to RUB76 in the following days.

It seems that traders began to think they had probably oversold the ruble, as in the hiatus that followed while the White House waited for the intelligence community to prepare several reports on Russia, commissioned by Biden in his first days in office, the ruble began to recover, strengthening to back close to RUB73 to the dollar again.

This was the time that all the macroeconomic results for 2020 were becoming available and it became apparent that Russia’s economy had suffered much less from the coronacrisis than feared. The 2020 reporting season also kicked off about this time and many companies, such as retailers and real estate developers, were coming out with record earnings as those sectors, among others, had actually benefited from the crisis. The Russian stock market began to rise and was returning 15% since the start of the year in February.

More speeches were made. The new US Secretary of State Antony Blinken gave his first foreign policy speech on March 3 that also identified Russia and China as problems, but it focused more on reviving the domestic economy and was relatively mild on the two US rivals.

The ruble continued to rally as investors increasingly took the view that Biden was more intent on fixing US Inc. and was not ready to start a global rumble with Putin or China’s President Xi Jinping. The ruble strengthened to RUB72.9 on March 17 – the strongest it has been all year and close to the level that many economists expected it to be at the end of this year.

Then the bomb dropped. That night ABC News' George Stephanopoulos caught Biden with a provocative leading question journalist trap asking if the president thought Putin was a “killer.” Biden mumbled his reply “I do.” Russia recalled its ambassador to Washington the next day and the ruble immediately tanked. Within a week the rate had lost three whole rubles to the dollar to reach RUB76.15 before stabilising for a week at about that level.

But as March gave way to April it rapidly became clear that Russia was moving a lot of troops up to the Ukrainian border and on April 1 the ruble began another leg of weakening, falling to RUB77.8 by April 8 as the accusations began to fly and the fears of invasion mounted.

Tensions between the US and Russia have not been this high since Russia annexed the Crimea in 2014, but Biden attempted to pop the balloon this week in a phone call with Putin, where he offered to meet one to one in the near future to thrash out their differences. The ruble immediate strengthened by two whole rubles after the news broke, falling back to RUB75.6. However, just over 24 hours later the US press reported that the Biden administration was about to issue its first round of targeted sanctions on a dozen individuals and the ruble gave up all its gains of the previous day, weakening by two whole rubles.

Analysts believe that the Kremlin realises that Biden has to impose some sanctions for domestic political reasons after Trump was so widely criticised for being soft on Russia. Russian Foreign Minister Sergei Lavrov warned that Russia would retaliate but he was careful to stress that it would not tolerate “economically damaging” sanctions, leaving some space for the White House to make largely symbolic sanctions against individuals or expel some diplomats.

The sources quoted in the reports of April 15 also said that the key question of whether Russian debt would be sanctioned had still not been decided, and those are the economic sanctions the Kremlin is most afraid off. Until this question is resolved the ruble will remain highly volatile.