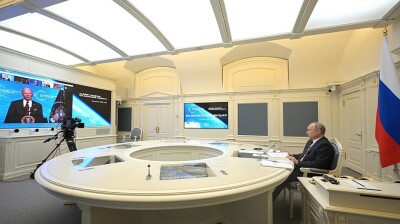 Putin has held out a hand of international co-operation to defeat the climate crisis.
By Ben Aris in Berlin April 23, 2021

In the morning of April 22 it looked like Russia was revving up to start WWIII by invading Ukraine. By the end of the day Russian President Vladimir Putin was holding out the hand of co-operation and offering to be a willing participant in the global effort to defeat the climate crisis.

Putin attended an online climate summit on April 22 called by US President Joe Biden, the third time the two men have spoken directly since the US president was inaugurated at the start of this year.

After some uncertainty over his attendance Putin took part via video link in the Leaders Summit on Climate, organised by the United States in an event being held on April 22–23.

The President of Russia put forth Russia’s position regarding the development of broad international cooperation aimed at mitigating the negative consequences of global climate change.

As bne IntelliNews has reported, Russia is engaged in a diplomatic dance with the US as the two rivals try to set a new source for their relations in the new Biden administration.

If the troop build-up around Ukraine was the stick then the attendance at the climate summit was the carrot. Biden has also signalled that while he has no compulsion about being tough on Russia and making it “pay the price”, he has also made it clear he is willing to open talks on co-operation with Russia on issues like climate action and arms control.

The double newsmakers of Russia’s troop withdrawal and Putin’s face to virtual face meeting with Biden for climate talks is more of the same dance and suggests the Kremlin is willing to meet the new US president on the common ground that has appeared between them.

Dealing with the deteriorating climate has become an increasingly urgent issue, a fact brought home to Russia by some major ecological disasters in 2020 and the growing realisation that Russia’s permafrost is melting.

On the Russian side, the summit was also attended by Minister of Natural Resources and Environment Alexander Kozlov and Adviser to the President and Special Presidential Representative on Climate Issues Ruslan Edelgeriyev.

Russia signed off on the Paris Accords in 2019 and has got off to a good start at reducing emissions, as bne IntelliNews reported in the Cost of carbon in Russia. However, most of the progress so far has been made by Russia’s leading corporates introducing environmental, social and governance (ESG) programmes to avoid incurring bans on their equity being held by international investors. But since the start of this year the government has started to get into the game as well and is imposing increasingly restrictive measures to reduce emissions. Putin called on the government to reduce Russia’s emissions to below the level of the EU by 2030 during his state of the nation speech a day earlier – a dramatic scaling up of Russia’s ambitions.

The desire to do something about the climate is one of the few issues that bring Russia and US interests closer together, and Putin’s amplification of the issue suggests he is looking for platforms where Russia can engage more fruitfully with the US.

“Our discussion today has demonstrated our deep mutual concern over climate change and our interest in stepping up international efforts to resolve this problem. The success of our efforts will largely determine the future of the entire planet, the development prospects of every country, people’s welfare and their quality of life,” Putin said in comments during the conference.

“We believe that the universal agreements reached at the UN provide a reliable legal framework for the joint efforts of states to control and reduce greenhouse gas [GHG] emissions,” Putin added.

Putin pointed out that Russia has been meeting its commitment under the Paris accord, committing itself to reducing CO2 emissions to 70% of the 1990 levels. But that is an easy goal, as Russia’s CO2 emissions peaked in the last year of the Soviet Union and the following year emissions collapsed along with the Soviet economy. Russia’s commitment means it can actually increase its emissions from the current 1.8Gt of CO2 emissions a year and still meet its commitments to the accord.

“I would like to point out that Russia is scrupulously implementing its international commitments in this sphere. This concerns, first of all, the implementation of the UN Framework Convention on Climate Change [UNFCCC], the Kyoto Protocol and the Paris Agreement,” said Putin. “We have been working energetically to formulate modern legislation to ensure reliable control over carbon emissions and to stimulate their reduction.”

Most of the other countries that signed up the Paris accord have committed themselves to cutting emissions from their 2005 levels, which if Russia adopted the same baseline would mean it would have to cut current emissions by a much more painful third.

Having said that, Russia lifted its game since the start of this year and in April the island of Sakhalin introduced a carbon cost, the first region to do so, to measure and tax companies that fail to curb their emissions.

“I would like to mention in this context that Russia’s Sakhalin Region has launched a pilot project to create a carbon pricing and trading system. This project will allow this Russian region to reach carbon neutrality by 2025,” Putin said.

Putin cited the progress Russia has made, saying that compared to 1990, Russia has reduced its GHG emissions more than many other countries. These emissions were cut in half – from 3.1bn to 1.6bn tonnes of СО2 equivalent.

“This was a result of the fundamental restructuring of Russian industry and energy over the past 20 years,” Putin said, without emphasising that most of these gains were simply the by-product of Russian industry investing into new modern equipment that by dint of being more efficient, and so improving profits, have the side-effect of reducing emissions.

“As a result, now 45% of our energy balance comes from low-emission energy sources, including nuclear power. It is common knowledge that nuclear power plants [NPPs] produce almost zero greenhouse gas emissions throughout their life cycle,” Putin said, skipping over the detail that Russia has always been heavily dependent on nuclear power and that the state-owned Rosatom has been investing heavily in developing Russian nuclear technology and has become a major exporter of nuclear technology.

Putin also boasted of Russia’s trump card – its endless forests that stretch over half of the face of the planet and absorb massive amounts of carbon dioxide.

“It is not enough to talk just about new amounts of emissions. It is important to absorb the carbon dioxide that has already accumulated in the atmosphere,” Putin said. “It is no exaggeration to say that Russia is making an enormous contribution to the absorption of global emissions, both our own and those of others, owing to the absorbing capacity of our ecosystems, which is estimated at 2.5bn tonnes of carbon dioxide equivalent a year.”

Secondly, the always well-briefed Putin dived into the issue of methane emissions, which are increasingly being captured by Russia’s fast growing petrochemical industry.

“Methane accounts for 20% of anthropogenic emissions,” said Putin. “The greenhouse effect of each tonne of methane is 25-28 times greater than a tonne of СО2. Experts believe that if we could halve methane emissions in the next 30 years, global temperatures would decrease by 0.18 degrees by 2050. The difference between this figure and the target set in the Paris Agreement is about 45%.”

Putin called for the development of a broad and effective international co-operation in the calculation and monitoring of all polluting emissions into the atmosphere.

Putin rounded off his comments with an offer for extensive co-operation with the international community and a joint effort to tackle the climate crisis in comments that stood in such stark contrast to Moscow’s stance from only a few hours earlier at the start of the same day where it looked like Russia was willing to risk starting WWIII by invading Ukraine.

“Russia is willing to propose a number of joint projects and discuss possible incentives for foreign companies that would like to invest in clean technology, including in our country,” Putin said. “The Russian Federation is genuinely interested in stepping up international co-operation so that we can continue to search for effective solutions to climate change, as well as other acute global problems. In fact, this should be the goal of the current video summit.”