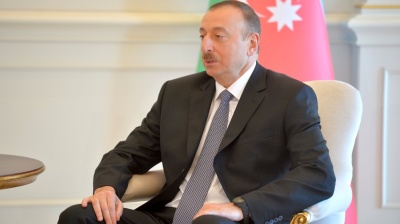 As is customary in Azerbaijani politics, the brief announcement on the website of the Azerbaijani presidency offered no explanation whatsoever for his dismissal.

In an even more troubling development, an unspecified number of high-ranking employees at the Ministry of National Security (MNS) were detained on October 20 for abuse of official powers, including harassment and extortion of businesspeople and carrying out inspections that are not under the jurisdiction of the MNS. According to news.az, a special investigation group was created (it does not mention by whom), comprising members of the prosecutor's office and the Special State Protection Service (SSPS).

While there is no indication as to whether Mahmudov was also indicted as part of the investigation, the incidents are almost certainly related. Trying to make sense out of them, however, requires a great deal of surmising, for not only does Baku rarely account to the public for its political acts, but it has stifled dissent and criticism to such a degree that independent observers do not dare express their opinion about politics for fear of repercussions.

The allegations against the high-ranking MNS officials are typical accusations that Baku makes when individuals or businesses have had a falling out with the regime. That is not to say that MNS did not carry out extortion of businesspeople,  but since extortion is a way of life among all the government bodies in Azerbaijan, it cannot be the real explanation.

Reports of businesses being taken over by relatives of officials without any explanation or compensation abound in the country. This reporter knows first-hand of a case in which one of the leading publications in the country was taken over by first lady Mehriban Aliyeva's business operations in such a manner, and other cases in which foreign publications paid hefty commissions to the office of the president for forcing private companies into purchasing advertising.

The only possible scenarios in which government extortion would become a problem is if MNS targeted individuals particularly cosy with the regime, or foreign executives whose companies invest a lot of money in Azerbaijan, in which case the incidents could escalate to the diplomatic level.

Eldar Mahmudov was a stereotypical figure on Azerbaijan's political scene: a career security bureaucrat, he had worked with the Ministry of Internal Affairs between 1980 and 2004, when he was appointed Minister of Security. He represented the country frequently at international security conferences and seminars, and continued to do so until as recently as October 9. He had even received an honour, the Azerbaijani Flag Order, for preserving stability and social order and fighting crime. He was no troublemaker, and was at ease with the Aliyevs, otherwise he would not have held the position he did.

One of the few observers who spoke about the case of Mahmudov, but asked to remain anonymous, believes that his removal is a positive development, regardless of the reasons behind it. "During his 10-year tenure at the MNS, the ministry became a tool for repression, and for spreading fear in the society. His dismissal may mean that the ministry might be reformed in the future," he told bne IntelliNews. He also does not believe the rumours that Mahmudov may be appointed in a higher position after his dismissal from the MNS. "Mahmudov is not ambitious enough to become prime minister," he added.

Other observers believe that the minister's dismissal was timely, and aimed at sparing him from the subsequent investigation at the MNS. Others connect his dismissal to the scandal involving Azerbaijan's largest bank, International Bank of Azerbaijan (IBA), which collapsed in May and took down several high-profile business executives in Baku, including former IBA Chairman Jahangir Hajiyev and Nizami Piriyev, owner of Azerbaijan's largest methanol plant, Azmeco.

One last thing that stands out about the MNS investigation is the involvement of the SSPS, a special military unit directly subordinated to Aliyev, in a trial that has to do with extortion of private businesspeople. Yes, the MNS is a military body, but SSPS' mandate is focused on national security, as its responsibilities have included guarding Azerbaijan's main gas export pipelines, protecting the president, legislators and government members, and participating in the country's armed land forces.

Given its profile, SSPS' involvement in the investigation is highly suspicious, and points to a possible connection with Baku's escalation of the frozen conflict with neighbour Armenia in recent months, potential failures of the MNS in this process, Azerbaijan's frustration with the stalled bilateral negotiation process with Armenia, and a possible intention to pursue more aggressive ways to retrieve its territories that are under Armenian occupation at the moment.

In the coming weeks and months, the array of possible scenarios behind Mahmudov's dismissal should narrow once Baku indicates whether Mahmudov is part of the MNS investigation or not.