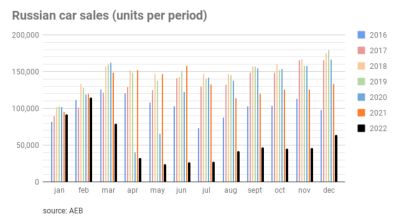 Car sales in Russia collapsed by 58.8% in 2022 to 687,370 units, but December sales were up by a quarter from November as production slowly revivies. / bne IntelliNews
By bne IntelliNews January 13, 2023

Car sales in Russia collapsed by 58.8% in 2022 to 687,370 units, the Association of European Businesses (AEB) said on January 12, as the sector continues to make a slow recovery from a collapse following the start of the war in February. (chart)

Production of cars in Russia almost completely ceased in the summer months as the sector came to a screeching halt. Most of the major international producers suspended operations and many of them have since exited the country.

Russian producers were also forced to severely restrict production after the parts they depended on, of which many are imported, ceased to arrive due to self-sanctioning by the European Original Equipment Manufacturers (OEMs).

However, as the M&A deals were done and new suppliers of parts were found, production began to slowly recover in the second half of the year, although it remains well below the levels of previous years.

December’s sales figures are a case in point with sales down by half from a year earlier, but the total number of sales in the month was up by almost 20,000 to 64,072, according to AEB, the second-best month in the post-war period. Only March did better with 78,900 sales but even that was down from the 114,349 sales in February, the last normal month of the year. (chart)

High-profile Western auto manufacturers such as Renault left the market, making the industry one of the hardest hit from the fallout of the war. Other producers like BMW have kept a foot in the door. The German carmaker has halted the production of new cars at its Kaliningrad factory, but is still importing parts and sticking to its service agreements. A final decision on exiting the market completely has not been made yet, according to the company.