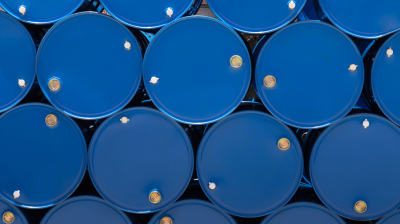 Evidence shows that, even while the EU has not slapped sanctions on Russian oil, traders are still shunning it. / Russia
By bne IntelliNews March 21, 2022

In the midst of the 1998 financial crisis Adam Elstein, the managing director of Bankers Trust’s Moscow office, famously told the Financial Times’ John Thornhill that he would rather “eat toxic nuclear waste” than buy Russian assets. Following President Vladimir Putin’s attack on Ukraine on February 24 Russia is back in that place.

Some oil traders are doing everything they can to avoid doing business with Russia, even though Russian oil exports have largely not been sanctioned yet. Even those traders willing to buy Russian oil are having problems, as banks are very reluctant to issue letters of credit (l/cs) or transfer money to Russia, even to unsanctioned banks.

So far, only the US has slapped a ban on imports of Russian oil but Christof Ruehl, Senior Research Scholar, Columbia University and the former chief economist at BP, told bne IntelliNews in a recent webcast that the ban will have little real impact on Russia’s oil business and is largely a gesture, as Russia's exports to the US account for less than 2% of its business and the oil is easily rerouted to other markets.

Nevertheless, the threat of sanctions, difficulties with shipping and payment arrangements, and in some cases the fear of drawing public criticism, has meant many traders are shunning Russian oil if they can. This has led to the discount of Russia's flagship Urals blend to the benchmark Brent price blowing up more than ten-fold. Urals has always traded at a small discount to Brent because of its higher sulphur content, but whereas pre-war this discount was $2 per barrel, it now stands at close to $30. 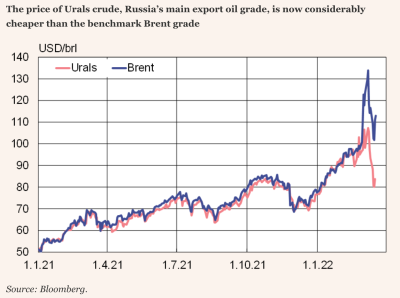 The West has largely avoided slapping sanctions on Russian oil – a critical revenue stream for the Kremlin – given the impact this would have on already-soaring global energy prices. But the market has done the job of sanctioning Russian oil exports on its own. Spot Urals cargoes continue to flow out of Russia, because some buyers, especially in Asia, are prepared to receive them despite the controversy and complications, and others are simply not in a position to find alternatives. However, given a choice many traders avoid buying Russian oil if they can, as dealing with Russia has become so toxic.

“Russian oil companies are facing significant problems exporting crude and refined products. Although there are willing buyers, generally speaking, for Russian oil, especially in Asia, arranging the shipping and payment has become extremely challenging,” BCS GM’s oil analyst Ronald Smith said in a note. “The IEA estimated earlier this week that Russian oil output will have to be cut by 3mn bpd in April due to these constraints.”

Prior to the invasion, Russia was exporting more than 5mn bpd of crude oil – equivalent to nearly half of its overall production – as well as 3mn bpd of refined oil products. That means if the IEA's estimate is right, 60% of Russia's usual crude oil exports are now piling up in storage. This will cause a huge dent in Russia's export revenues. According to Russian federal customs data, the value of its oil exports exceeded $110bn in 2021, up nearly 52% year on year on the back of soaring oil prices and the easing of OPEC+ quotas.

Over 30% of Russian oil exports in 2020 went to China, according to the US Energy Information Administration (EIA), and Beijing has no political motive for declining these supplies. Most of this oil is produced in Eastern Siberia and is classified as ESPO blend, the low-sulphur content of which makes it more expensive than Urals. Furthermore, reports indicate that Russian oil suppliers and their Chinese buyers are finding ways of getting around the added problems caused by sanctions. Reuters reported on March 11 that Siberian oil firm Surgutneftegas was allowing Chinese buyers to receive oil without providing guarantees, known as letters of credit, to sidestep Western restrictions. Nevertheless, ESPO's usual premium to most other benchmarks has also plunged in recent weeks, indicating that flows to Asian markets have also been affected.

In joint second place were Germany and the Netherlands, which accounted for 11% each of the oil that Russia shipped overseas in 2020, and other OECD countries in Europe took a further 26%. And this is where the sharp decline in Urals exports is mostly coming from. A number of European governments and companies have said they will try to limit Russian oil purchases where possible. South Korea took a further 6%, while other Asian buyers received 5%.

BCS GM believes that the IEA forecast is too extreme, but is expecting a temporary reduction in oil exports until traders and buyers find workarounds to the current problems as “the entire world oil trade needs to be restructured,” says Smith.

President Putin has tried to a brave face on the problems, assuring the population that the sanctions will mean lower prices on the domestic market. And given the growing glut of Russian oil inventories, prices for gas at the pump have already fallen by RUB2 per litre from RUB66 (approximately $0.66).

But with inflation already leaping to an annualised rate of 20%, prices across the board are predicted to rise strongly this year just as unemployment rises sharply and incomes plummet. The government is already planning to roll out new RUB1 trillion ($9.5bn) social spending support and plans to tweak the tax regime to cushion the blow.

“Much of the price of gasoline and diesel at the pump is made up of excise taxes. Additionally, the government is at least thinking about halting the Final Tax Manoeuvre, which was to eliminate the export duty by 2024, which would put further upward pressure on domestic product prices,” says Smith.

Shell was slammed earlier this month for purchasing a heavily discounted cargo of Urals, just days after announcing its intent to leave Russia. The Anglo-Dutch major initially defended the purchase, saying it would seek alternatives to Russian oil wherever possible but that shifting its operations would not happen overnight. But facing sustained pressure, the company later said it would immediately halt spot purchases from Russia. Others including BP and Norway’s Equinor have also said they will not enter into any new contracts to offtake Russian crude.

This is not to say Russia is lacking traders to take its oil, however. Shipping data shows that commodity trading giants Trafigura, Vitol and Glencore have all loaded cargoes of oil products onto tankers at Russian ports this month, The Times reported on March 12. These companies, all of which have close ties with Russia, have come under less scrutiny than international oil companies (IOCs). This is perhaps because they are less aligned with any specific jurisdiction and public opinion there. Whereas BP is considered British, Trafigura is considered global.

Some refiners are continuing to buy Urals simply because they do not have any easy alternatives. In Central Europe, for example, refiners receive Russian oil via the Druzhba oil pipeline direct from Russia, and getting supplies from overseas is far trickier. Meanwhile, some buyers are exploiting the low cost of Russian oil. According to Reuters, state-owned Indian Oil bought 3mn barrels of discounted Urals from Vitol this month for May delivery.  India is also in talks directly with Russia to buy more commodities and oil from Russia directly at deeply discounted prices. India has avoided openly condemning Russia’s invasion, given its close diplomatic and defence ties with the country. Russia is India’s biggest arms supplier.

"Global oil markets are still adjusting to the impact of former sanctioning and self-sanctioning of Russian volumes. As cargoes, bought before the Russian invasion, are delivered we see significant volumes in tankers with nowhere to go," Nathan Piper, head of oil and gas research at Investec, told bne IntelliNews. "Ultimately we expect volumes to move to India and China given the material discount, but together they won't absorb all of it, so we expect a tight oil market to tighten further.”

Missiles or sabotage: What caused the explosion at the Russian airbase in Crimea?
2 days ago
Czech government remains colour blind on green issues
3 days ago
Poland ups the ante in feud with Brussels over judiciary reforms
3 days ago
What's the current outlook for Belarus' export sector?
4 days ago
Russian gas exports to Europe tumble in June
4 days ago