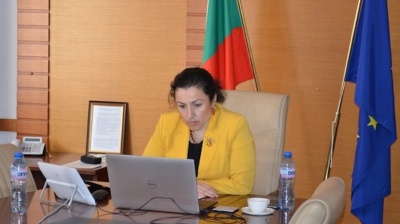 Bulgaria’s Agriculture Minister Desislava Taneva admitted she is aware of fraud in the distribution of EU funds for farmers but is urging all concerned parties to keep this secret as otherwise the funding will be stopped, a video published by investigative news outlet Bivol.bg showed on June 8.

Bulgaria has been widely criticised for the lack of any progress in the fight against top-level corruption. Critics of the ruling Gerb party led by Prime Minister Boyko Borissov have repeatedly insisted that the party is extremely active in utilisation of EU funds but the level of corruption in the use of funds is very high.

The recording was made during a meeting of the advisory board on fruit and vegetable production, most likely held at the end of March. During the meeting, Georgi Vasilev, a secretary of the association Bulgarian Pepper is asking Taneva why the sector has received more funding than expected under the EU’s Voluntary Couple Support scheme.

“I suggest that we stick [to the claim] that we do not have such frauds and everything is fine, because otherwise this [financing] will also be stopped. In the end, we did what the industry wanted. But to brag about how big fraudsters we are? They [the EU] will say tomorrow “So you should not receive this aid,” Taneva says.

Her warning comes after Vasilev says his organisation was asked by 22 industry members about the higher subsidy.

“We are guessing where this money that is in excess might come from. I suppose it is not just about us but about all vegetables. We would like, if possible with numbers, [to know] officially how it happens that we have received the money we have got,” Vasilev said.

Taneva also said that if the EU authorities do more thorough checks, the programme will be compromised due to the high level of mistakes.

Bivol.bg quoted Vasilev as saying the scheme is being widely used in Bulgaria for frauds.

“60% of the people who apply for these subsidies are lying to the state with the help of the Ministry of Agriculture and Food (MAF). [People] in the State Agriculture Fund and the MAF know that very well. Since this aid exists, we are saying it to them every year,” Bivol.bg quoted Vasilev as saying.

He claims that businesspeople get the subsidies but do not produce what has been claimed or spend only around 20-25% of the sum on farming.

This is not the first scandal involving misuse of EU funding in Bulgaria during Borissov’s current government. In 2019, Bivol.bg revealed the misuse of EU funds allocated for the construction of guest houses.

In May, the then agriculture minister Rumen Porozhanov was forced to resign due to that scandal. In October, the prosecution said it was taking former deputy economy minister Alexander Manolev to court along with another individual for alleged fraud related to EU funding for the construction of guest houses.

The following month, the state agriculture fund revealed it had found irregularities at 253 out of 288 guest houses built with EU funds. So far, there have been no convictions or returned funds from that programme.