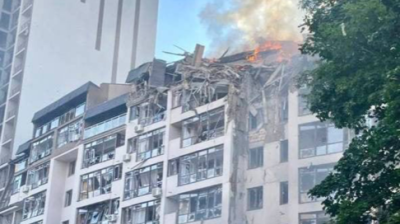 A hit on a Kyiv apartment block in June, four months into the war.
By Denista Koseva in Sofia November 3, 2022

Bulgaria’s parliament approved on November 3 a decision to provide military aid to Ukraine with the votes of Gerb, Change Continues, the Movement for Rights and Freedoms (DPS), Democratic Bulgaria and Bulgarian Ascend, seven months after a previous decision that the country can only repair Ukrainian weapons.

Only by the pro-Russian Bulgarian Socialist Party (BSP) and Vazrazhdane declined to back the decision.

According to the parliament’s decision, the government is obliged to provide within a month information on what military aid can be provided to Ukraine according to Bulgarian capabilities. The government is also obliged to back Ukraine’s claim against Russia for violations of human rights.

In exchange for its outdated Russian-made military equipment, which Bulgaria will provide to Ukraine, the country will get modern Western weapons. The decision was first proposed to the new parliament by Democratic Bulgaria. The reformist formation has been pushing for this decision since the start of the Russian invasion to Ukraine.

“Bulgaria stands with dignity and takes its share of the responsibility for the security and peace in our region. It stands along its allies in the EU and Nato,” Democratic Bulgaria commented on Facebook.

One of its leaders, Hristo Ivanov, commented that by providing military aid to Ukraine, Bulgaria has a unique chance to modernise its army quickly as the equipment it provides to Ukraine will be replaced by modern weapons from its Nato allies.

He added in an interview with public broadcaster BNT that the country has started realising its responsibility for the security in the region.

“If we want to live in a secure region – Eastern Europe – this means that we should be ready to modernise our army forces, strengthen our defence, take our share of responsibility in Nato and the EU within the common positions they take without scaring people as many politicians do,” Ivanov said.

He was referring to the repeated statements by President Rumen Radev, the BSP and Vazrazhdane that by providing military aid to Ukraine Bulgaria is taking sides in the war and getting involved in it.

“Mr. President, stop scaring people that we are dragging Bulgaria into a war,” Ivanov also said.

He added that if there was a risk of Bulgaria becoming involved in the war, Radev should have been informed by the special services and would have called a session of the security council. No session has been called until now.

During the debates in parliament, BSP leader Kornelia Ninova accused its former coalition partner Change Continues of not standing by its positions. The Change Continues-led government of former prime minister Kiril Petkov asked the parliament to provide only technical assistance to Ukraine by repairing its weapons. That was a compromise made by Petkov’s party in order to keep the BSP in the coalition.