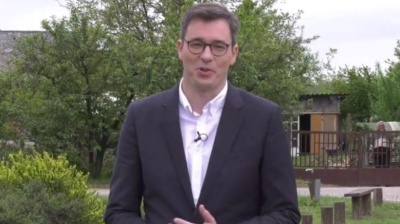 Gergely Karacsony announced he would enter the race from his home village in northeast Hungary.
By bne IntelliNews May 17, 2021

Budapest’s liberal mayor Gergely Karacsony announced his bid to run in the primary of the opposition on May 17, which will select the candidate to face off Prime Minister Viktor Orban in the 2022 elections.

In a Facebook video posted in his home village in rural northeast Hungary, Karacsony said he would accept the nomination of his party, the leftist-liberal Dialogue, and run in a two-round primary in September and October as part of a six-party opposition coalition that seeks to unseat the governing Fidesz party.

The Socialists and green party LMP have already endorsed the 45-year-old pollster-turned politician, who unseated the Fidesz incumbent in the 2019 local elections to become Budapest mayor.

After two failed parliamentary elections, Hungary’s fragmented opposition stood behind a single candidate in dozens of cities that led to the biggest election fiasco of the ruling Fidesz party in 10 years.

He was backed by opposition parties on the basis of being the least objectionable candidate, who was able to garner support from voters with often wildly different views.

Karacsony becomes the fifth prime minister candidate to run in the primary race. Two weeks ago, Klara Dobrev, the Vice President of the European Parliament and wife of former premier Ferenc Gyurcsany, announced her candidacy, backed by the largest opposition party DK.  Far-right-turned centrist party Jobbik, liberal Momentum and a civil group led by the right-wing mayor of Hodvezovasarhely are also in the race.

"I made this decision to run because I feel that my homeland is in big trouble," he said, adding that he believes the biggest problem facing Hungary is polarisation dividing the country's citizens, Karacsony said in his Facebook campaign speech. He pledged to reunify the country, restore the rule of law and rebuild the republic.

Karacsony announced the launch of his own movement called Movement for the 99%, as he said 1% of the privileged rule over the 99% majority. "It is time for the country to shake off this domination", he said.

Analysts were expecting the liberal politician to step forward as he is seen by many as the only candidate to have a viable shot at beating Viktor Orban, who had solidified his rule after three supermajority wins since 2010.

"He is short and fat, and I am tall and slim"

"Meet the man who could oust Viktor Orban, Hungary’s strongman", The Economist entitled a story about Karacsony last week, which has caused a controversy because of an unfortunate comment by the 45-year-old, for which he later apologised.

For anyone still struggling to tell the difference between him and the prime minister, Karacsony helpfully points out that: "He is short and fat, and I am tall and slim", he was quoted as saying by The Economist.

The mayor of Budapest and the prime minister could not be less alike, according to the story. Viktor Orban has total control of his party since 2010 and counts on a strong rural voter base.

Karacsony, an academic, was elected Budapest mayor by an alliance of six parties and enjoys the support of young, urban voters. An avid sports fan, Orban has built a stadium in his home village, while Karacsony campaigned against the Athletic Stadium in Budapest and urged more funding to healthcare instead.

Just after his controversial comments about Orban’s size, Karacsony came under a barrage of criticism from pro-government media for his lack of adequate English. Karacsony passed a non-accredited advanced language test at the Corvinus University to get his MA degree, but most often he uses interpreters.

The Economist also points out differences in character. The liberal politician is seen as a peacemaker, while Orban is known for his confrontational style.

For long, Karacsony has rejected the idea of running for the post to face off Orban.

"I have no desire to do so and I would rather encourage other suitable candidates," he said in December.

Dithering adds to the common criticism of Karacsony that his natural meekness looks more like weakness to some voters, The Economist wrote just last week before he announced his candidacy.

Opposition parties last week have agreed on the timetable for the primaries last week. The six-party coalition for the first time will run on a joint party list, nominate joint candidates in each of the 106 individual seat districts and select the prime minister candidate in two rounds.

Polls show Fidesz and the united opposition head-to-head in what will certainly be a tight race. Due to the uneven electoral system, opposition parties need to win the general vote by 3-4pp to win a majority in the 199 seat parliament.