Once again, representatives of the real estate industry from all over the world descended on Cannes (pronounced like the singular, not the plural for the non-francophones among us) for the 26th instalment of MIPIM, which opened its welcoming arms (and tills) to all comers on March 10-13. Right from the outset there was a buzz in the air. This was confirmed by the convention organiser Reed MIDEM, who noted that attendance this year was the highest since the advent of the global financial crisis, which hit the property industry particularly hard, with a total of 22,000 registered delegates from 93 countries represented, making this real estate event a truly global one.

One of the early events in the convention calendar that attracted delegates from Central and Eastern Europe was the New Europe Breakfast on the morning of March 11, sponsored by CEEQA. The turnout was surprisingly good, considering the relatively early time slot following the likely late finish for some of the delegates on the previous night of revelry.

The CEEQA event was an opportunity for attendees from the CEE region to network, hear the shortlisted nominees for the CEEQA 2015 Awards (which will be held in Warsaw on the April 14), in addition to the announcement of this year’s winners of the RealGreen Awards, which are dedicated to green buildings. And the winners were… Deutsche Asset & Wealth Management in the RealGreen Investor of the year category, Skanska Commercial Development Europe won the RealGreen Developer of the year category, and Arcadis was named the RealGreen Service Provider of the year. Portland Trust picked up the final award for RealGreen Building of the Year for their Floreasca Park office project in Bucharest, designed by the Prague office of Chapman Taylor Architects.

The Central European contingents were out in force once again this year, with Poland and the Czech Republic contributing the largest delegations of 186 and 70 companies respectively. Poland made their presence known by taking over a sizeable proportion of valuable real estate on the upper Riviera level of the Palais, represented by numerous cities and regions including Krakow, Gdansk, Poznan, Wroclaw, Lodz in addition to the capital Warsaw, all vying for investor‘s attention.

The Czech contingent of exhibiting cities and regions included the Karlovy Vary and the Central Bohemian Regions in addition to the City of Prague and Ostrava, which exhibited in coalition with the Moravian-Silesian region. They once again served up the best beer in the Palais, for which there was never a shortage of punters partaking in a tasting session at all times of the day; after all, in the Czech Republic it’s never too early for the chilled amber beverage! The insatiable thirst of attendees even prevented the bar tenders from cleaning and closing up after the day’s activities, delaying their hard earned rest with urgent calls for just one more – the appeals were much more effective when spoken in Czech with a cheeky grin, and lo! additional bottles were presented to the thirsty delegates.

Noticeable in their absence this year were the established Russian contingent of city and regional showcases as well as expositions of various large projects, which in previous years made their presence known either by their sheer scale and animation or via their leggy hostesses, which one was never certain whether their task was to attract participants or in fact distract them from the detail or content on offer. This year even Moscow refrained from exhibiting, only sending a delegation of representatives. Clearly not even Vladimir Putin’s propaganda could mask the fact that Russia is currently well off real estate investors’ radars, with the only debate being when or if their appetite will return, at least to pre-Crimean crisis levels, if not to the unsustainable pre-crisis ones. Bouncing between crises it seems… is this volatility the new normal business environment we all have to adapt to?

Nevertheless, the universe must always remain in balance: where a void occurs it must be filled, and the Russian hole was plugged by US and Canadian contingents, which boosted their numbers by 15% and 80% respectively, in addition to the Turkish delegation, which increased its presence by 32% to a total of 244 companies.

While the profile may not have been as brash and ostentatious as we've come to expect from projects in the Middle East, nevertheless there was no shortage of extravagant projects, reflected in the equally elaborate models on display. By all accounts Dubai is well and truly back on its horse, albeit trotting with a slightly more tempered and sustainable pace after the breakneck gallop that previously ended with a rather serious fall at one of the fences.

Ultimately, no matter how much hot air and swaggering monologue a banker, lawyer or fund manager may try to blow in one’s direction, the fundamental reason why 22,000 people congregate on the shores of the French Riviera every year is the existence of a tangible product (some would argue by-product) of the industry: buildings. Buildings that provide space for commerce, industry and lifestyle – some of which are also aesthetically pleasing and make a contribution not only to the bottom line of a fund manager’s spreadsheet (or their bank account), but also to the cities and towns in which we all live. That is the beauty of the industry, and some of this year’s MIPIM Award winners certainly made their respective contributions. 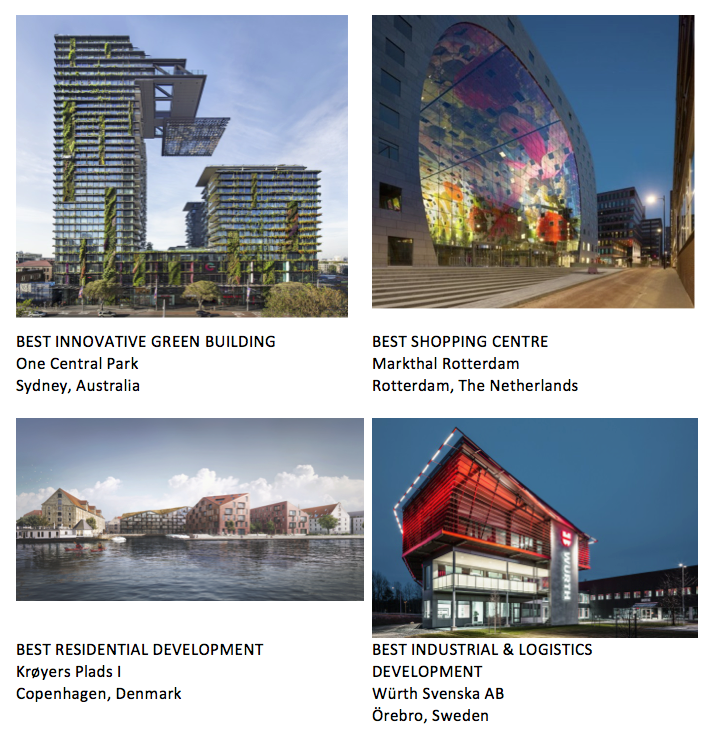