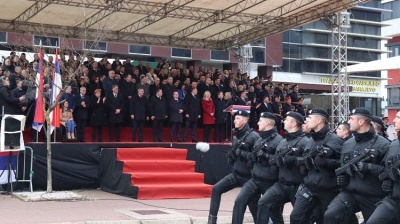 Celebrations of Republic Day, a holiday banned by Bosnia's Constitutional Court, in Banja Luka on January 9. / vladars.net
By Denitsa Koseva in Sofia January 9, 2023

Bosnia & Herzegovina’s Republika Srpska celebrated the unconstitutional Republic Day with a military style parade despite efforts by the international community and the Bosniaks (Bosnian Muslims) within the country to persuade the local authorities to abandon plans for a celebration.

Republic Day marks the 1992 date when Bosnian Serbs declared their state in Bosnia, sparking a four-year war that killed more than 100,000 people and left millions homeless.

Bosnia consists of two autonomous entities – the Serb-dominated Republika Srpska and the Muslim-Croat Federation. Each of them has its own parliament, government and president and there are also state-level institutions.

The military parade, held in East Sarajevo, was the first ever staged by Republika Srpska and angered the Bosniaks and the international community.

The holiday was declared unconstitutional by the state-level constitutional court in November 2018 but authorities in Republika Srpska have been ignoring that ruling since then.

Dodik is openly pro-Russian and supports Putin’s invasion of Ukraine. He has also been threatening for years that Republika Srpska will secede from Bosnia, which led to his sanctioning by the US years ago.

The US embassy in Bosnia wrote on Twitter that the commemoration of Republic Day and the order for Putin undermined the state of Bosnia, while claims for independence of Republika Srpska would only result in the entity’s destruction.

The EU and the UK also strongly condemned the celebration, with European Commission spokesperson Peter Stano calling the decision to honour Putin "deplorable and misguided". Bosnia aims to join the EU and was given accession candidate status in December.

Stano commented on the issue at a briefing on January 9, telling journalists: “Mr Dodik knows what is expected to progress on [the EU] path, to fulfil [the] EU ambition of people in Bosnia. These expectations are conveyed v. clearly. He is aware EU rejects divisive rhetoric & steps to undermine the unity, territorial integrity, & sovereignty of BiH,” according to comments posted on Twitter by the EU delegation in Bosnia.

“Political leaders in BiH know how important respecting and following the Rule of Law is for the EU. This is all the more important with BiH being awarded [EU] candidate status. Decisions of Const. Court have to be respected,” the statement added.

“Siding with Putin isolates RS & its leadership internationally. There is no place in  for decorating politicians who are ordering the destruction of a neighbouring country & the killing of its people. This decision is deplorable and misguided.”