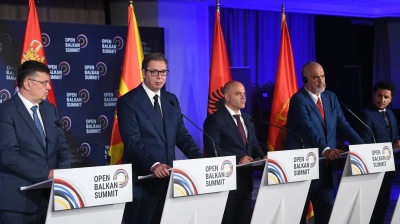 Leaders of five of the six Western Balkan states met in Ohrid, North Macedonia, pledging to work together to deal with the economic crisis. / predsednik.rs
By Valentina Dimitrievska in Skopje June 8, 2022

Leaders of Albania, North Macedonia and Serbia met on June 8 as part of the Open Balkan Summit held in North Macedonia’s town of Ohrid, joined for the first time by officials from Bosnia & Herzegovina and Montenegro as observers. Kosovo’s PM Albin Kurti rejected an offer to participate in the summit.

Open Balkan is a joint initiative of Albania, North Macedonia and Serbia, previously known as ‘mini-Schengen’, a project aimed to improve economic and regional co-operation, as well as the free flow of goods and people, among the three Balkan countries. It is open for other countries in the Western Balkans should they wish to join.

Earlier this month, Kurti thanked North Macedonia's Prime Minister Dimitar Kovacevski for the invitation, but said that Kosovo will not participate in the summit due to Serbia’s “unequal treatment of the Kosovo citizens”.

"With the Open Balkans, we are obliged to provide a better standard of living for citizens, better infrastructure, and to prevent corruption with the administration and institutions," said Kovacevski, as the host.

Several documents were signed by Albania, North Macedonia and Serbia for cooperation in the area of culture, education and tourism as well cooperation of their tax administrations in combating tax evasion.

Rama wrote on Facebook “Enjoying coffee on arrival in Ohrid, with the prime minister, Dritan Abazovic, who today officially introduces Montenegro to the Open Balkans, as well as with the US ambassador to Serbia, Chris Hill, who is a longtime friend of Albania and Albanians, but also a staunch supporter of the Open Balkans.

Abazovic said that the Montenegrin government supports all initiatives that imply the overall progress of the Western Balkan countries, adding that Open Balkan should not be perceived as an idea of politicians, but an idea for citizens and businesses.

“Real integration starts with the economy and society. Open Balkan initiative is a remarkable achievement of the region because the region has come up with this idea on its own. I am happy that EU was invited,” Varhelyi said on a tweet.

Escobar said that the US supports all initiatives that bring the region closer to the EU and promote stability.

“I encourage the leaders of the Open Balkans initiative to remain an economic initiative. This is not a political project,” Escobar said, adding that the initiative could accelerate the region's path to EU membership.

The war in Ukraine was one of the important topics of the summit. During their introductory addresses, the leaders of the Western Balkan countries emphasised the importance of the Open Balkan initiative in times of crisis due to Russia's invasion of Ukraine.

"Our vision is for the region to be integrated. We benefit from the flow of people and capital and we aim to attract new investments. Our political goal is that the Western Balkans must be part of the European Union," Kovacevski said.

The participants also agreed to work together to deal with the economic crisis and difficulties in securing food and energy.

"The doors to the Open Balkans remain open. You are welcome at any time. See you soon with the same energy and new ideas and projects to enhance our cooperation,” Kovacevski said at the end of the summit.