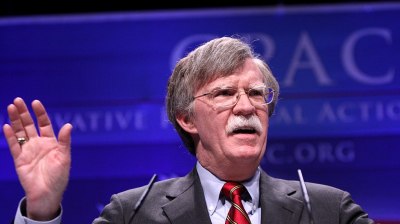 Bolton has long been known as a hawk when it comes to dealing with Iran and other foreign policy challenges. / Gage Skidmore.
By Will Conroy in Prague July 23, 2018

Donald Trump’s national security advisor John Bolton on July 23 followed up on the US president’s late-night all-caps tweeted threat to Tehran with remarks to reporters meant to show that the belligerence was not empty bluster.

Foreign policy hawk Bolton said in Washington: “I spoke to the president over the last several days, and President Trump told me that if Iran does anything at all to the negative, they will pay a price few countries have ever paid.”

On July 22, Trump tweeted: “To Iranian President Rouhani: NEVER, EVER THREATEN THE UNITED STATES AGAIN OR YOU WILL SUFFER CONSEQUENCES THE LIKES OF WHICH FEW THROUGHOUT HISTORY HAVE EVER SUFFERED BEFORE. WE ARE NO LONGER A COUNTRY THAT WILL STAND FOR YOUR DEMENTED WORDS OF VIOLENCE & DEATH. BE CAUTIOUS!”

Trump’s burst of aggression impacted on the already-collapsed Iranian rial (IRR) sending it to a new all-time low against the dollar. By the market close in Iran on July 23, it was trading at around 95,000 to the USD on the unofficial market, making importers even more anxious to obtain the fixed official rate of 42,000 to the dollar offered to businesses that win government approval.

There was some levity in Iran over Trump’s fiery Twitter outburst, with wags pointing out that Persian does not allow for all-caps writing so the only way that the tweet could be properly relayed to Iranians would be through shouting it out. However, there is no doubt that the US is going full-speed ahead in stepping up the economic, political and psychological pressure on Iran. The Islamic Republic attempted to dismiss Trump’s threats as psychological warfare deployed to appeal to the president’s electoral base ahead of the midterm elections in November but with the US allied to Saudi Arabia and Israel in its open and mounting hostility to Tehran there has to be some nervousness as to whether White House policy towards Iran could eventually lead to military conflict.

Pulling Trump’s tail
Nevertheless, Iranian Foreign Minister Mohammad Javad Zarif was not shy of pulling Trump’s tail, responding to the US president with a scathing tweet of his own, mimicking the caps-lock message. It read: “COLOR US UNIMPRESSED: The world heard even harsher bluster a few months ago. And Iranians have heard them—albeit more civilized ones—for 40 yrs. We’ve been around for millennia & seen fall of empires, incl our own, which lasted more than the life of some countries. BE CAUTIOUS!”

One potential flashpoint that could be ignited by Trump’s sanctions campaign against Iran is the Strait of Hormuz. The US wants to see a worldwide boycotting of Iranian oil by November and Iran has indicated that if its crude exports are stopped it may block the strait to stop energy exports from across the Gulf. The emir of Qatar, Tamim bin Hamad Al Thani, who was due to meet Theresa May in Downing Street on July 23, warned that US sanctions could certainly provoke Iran into closing sea lanes in the strait.

Europe is clearly appalled by Trump’s approach to Iran, but in the hope of easing tensions is trying to remain as diplomatic as possible. The EU’s major powers still say Trump had no good reason to in early May unilaterally pull the US out of the multilateral nuclear deal that shielded Iran from heavy sanctions in return for compliance with measures that bar Tehran’s path to any possible development of a nuclear weapon. Like Russia and China, which in late 2015 also signed the accord, the EU says Iran is in full compliance with the agreement. But the Trump administration, egged on by the Israelis and Saudis, is clearly bent on using sanctions to squeeze Iran’s economy to the point where it might trigger regime change or at least force the Iranians to renegotiate the nuclear deal in a way that will reshape its military and political roles in the Middle East.

While the EU remains committed to trying to salvage the nuclear deal and help Iran economically survive the US sanctions assault—though devising feasible ways to do that when so many foreign companies are linked to the US financial system and market is proving excruciatingly difficult—the Trump administration is busy seeking any methods it can to stir up trouble for the Islamic Republic.

Aligning with the cult-like MeK
Some Iran experts have been left open-mouthed and wide-eyed on realising that the strategy even includes aligning the US with the fringe, cult-like Iranian opposition group, the Mujahedin-e-Khalq (MeK), which lost out when the spoils were shared after the 1979 Islamic Revolution, went on to take Iraq’s side in the Iran-Iraq war, went into exile in Albania and has no apparent support of any significance inside Iran.

The weekend also saw US Secretary of State Mike Pompeo describe Iran’s ruling elite as a “mafia” during a speech in the US on Sunday aimed at Iranian-Americans. Among accusations thrown by Pompeo was a claim that Iran’s Supreme Leader Ayatollah Ali Khamenei maintains a personal off-the-books hedge fund worth $95bn that is untaxed and used as a "slush fund" by the Islamic Revolutionary Guard Corps (IRGC). Pompeo immediately came under fire from critics pointing out that Trump does not seem to have any problem growing closer to the rather suspect regimes of Russia and South Korea, but Pompeo pushed home his point, saying: "These hypocritical holy men have devised all kinds of crooked schemes to become some of the wealthiest men on Earth while their people suffer."

Tehran’s foreign ministry spokesman, Bahram Qassemi, responded: “These remarks are a clear example of the [US’] interference in Iran’s internal affairs and exactly in line with its long-term destabilising and destructive policies in the region.” Pompeo’s intervention would encourage solidarity among people inside Iran, he added.

Jamal Abdi from the National Iranian American Council (NIAC) was quoted by the Guardian as saying: “Clearly, Pompeo is hoping to elevate voices who would set the US and Iran on a collision course to conflict over the majority in the Iranian-American ..community who have been shocked and dismayed by this administration’s disastrous approach.”