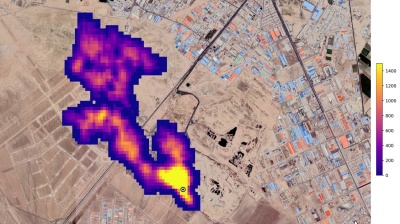 Imaging shows a methane plume from a landfill south of Tehran that is at least three miles (4.8 kilometres) long. / JPL, Nasa/Goodgle Earth.
By Aida Kadyrzhanova in Almaty October 26, 2022

An orbital Nasa instrument has detected large, worldwide emissions of methane, a potent greenhouse gas (GHG). “Super-emitters” were identified in countries such as Turkmenistan and Iran.

In all, the device, called an imaging spectrometer, has exposed more than 50 methane "super-emitters" in Central Asia, the Middle East and southwestern US since it was installed in July aboard the International Space Station, Nasa said on October 26. Methane commonly pours out of sprawling oil and gas facilities and large landfills.

Examples of newly imaged methane super-emitters discovered by the spectrometer were presented by Nasa’s Jet Propulsion Laboratory (JPL), shortly before news broke that the EU seems set to break its promise to cut methane emissions by 30% by 2030.. They included a cluster of 12 plumes from oil and gas infrastructure in Turkmenistan, with some plumes stretching more than 20 miles (32 km). Scientists estimated the plumes collectively spew methane at a rate of 111,000 pounds (50,400 kilograms) per hour. Such a rate rivals the peak flow from the 2015 Aliso Canyon gas field blowout near Los Angeles, recorded as one of the largest accidental methane releases in US history.

Two other large emitters were an oilfield in New Mexico, and a waste-processing complex in Iran, emitting nearly 60,000 pounds (29,000 kilograms) of methane per hour combined. JPL officials said neither were known to scientists before this latest research.

The Iran footage shows a plume of methane rising that is at least three miles (4.8 km) long from a major landfill south of Tehran. Methane is a byproduct of decomposition at landfills.

"Some of the plumes EMIT [Nasa's Earth Surface Mineral Dust Investigation] detected are among the largest ever seen – unlike anything that has ever been observed from space," said Andrew Thorpe, a JPL research technologist leading the methane studies.

In comparison to CO2, which remains in the atmosphere for centuries, methane remains for only about a decade. Achieving decreases in methane emissions thus has a more immediate influence on global warming.

The trick is getting governments to act to shut down the emissions once they have been identified. In recent years, scientists working for other projects monitoring methane emissions from space have complained that remote Turkmenistan, for instance, has not responded to their enquiries.

bneGREEN: Energy efficiency investment turns the corner in 2022, but more is needed
16 hours ago
bneGREEN: EU energy ministers agree to speed up permitting and deployment of renewables temporarily
3 days ago
bneGREEN: ING: Euro sustainable bond supply set to stagnate in 2023
9 days ago
Bulgarian PV equipment company AmonRa Energy to hold IPO
11 days ago
bneGREEN: Climate paralysis at COP27 as no progress made on 1.5 degrees
12 days ago