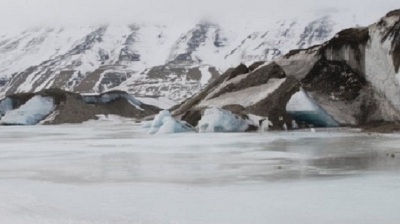 The disappearance of the polar ice cap will cause more life-threatening heatwaves across the world from Asia to Europe to the Americas, turning inhabited regions into scorched deserts and pushing millions of people to migrate in search of better bearable temperatures.

Such unprecedented increases in temperature in the Arctic also threaten to make efforts to reduce CO2 emissions, limit global warming and deal with climate change almost worthless, and can only make life more dangerous and unhealthy for both the physical environment and all of humanity, wherever they live. Melting sea ice and rising temperatures could end any chance of meeting the COP26-agreed 1.5°C limits on global warming.

Scientists at the Norwegian Meteorological Institute found that temperatures in the North Barents Sea had risen by 2.7°C per decade, with a maximum in autumn of up to 4°C per decade.

“The new results surpass everything we know when it comes to observed temperature changes. Nowhere else on the globe does it seem to have greater warming than just across the northern Barents Sea,” said Ketil Isaksen, lead author of the study and climate scientist at the Norwegian Meteorological Institute.

The study, published in the journal Scientific Reports, analysed weather data from the islands of Svalbard and Franz Josef Land from 1981 to 2020, comparing surface air temperatures with changes in sea ice concentration and sea surface temperature.

Its conclusion made for sobering reading, saying that the warming rate for the Northern Barents Sea was “exceptional and corresponds to 2 to 2.5 times the Arctic warming averages and five to seven times the global warming averages” – an increase which is strongly linked to the reduction of sea ice and increased sea surface temperature.

The Arctic is particularly vulnerable to global warming, and research into temperature levels and ice coverage in the region is crucial to the world’s understanding of global warming and climate change.

She warned that the world only had 30 years left to save the ice in polar regions.

“The climate models all agree that the Arctic will become ice-free by 2050. So that's, you know, 30 years. And there is a large uncertainty with that, but the fact that all of them tend to agree is really eye-opening. You know, that's within our lifetime,” she said.

The melting of the sea ice acts as a bell-weather for climate change.

Sea ice is especially importance as it helps to keep temperatures down across the globe, not just in the Arctic, acting as a kind of air-conditioning unit.

“Sea ice reflects the majority of sunlight back into space during summer. It acts like a thermal blanket in winter, trapping the heat in the ocean and keeping the atmosphere cool. And without those two big things that it does, it's going to make our climate warmer,” she went on.

She stressed that recent research had found that sea ice was melting faster than previous thought.

“Things are changing faster than we expected. And we've also seen that with sea ice change and what the models project. It's melting much faster than we anticipated based on the climate model projections,” she explained.

Europe’s efforts to fill its gas reserves ahead of the coming winter could come with a hefty price tag, as global LNG price have reached up to 10 times their normal levels as the continent scrambles for available cargoes.

Waste generation has increased sharply in recent decades, but waste management infrastructure has in general failed to keep up.