A 97.7% landslide victory in Kazakhstan’s general election on April 26 saw Nursultan Nazarbayev retain the presidency. However, dire trade data and mounting pressure on the economy means the celebrations could be short lived.

In the final quarter of 2014 oil prices fell from just under $100 per barrel to just under $60 – a decline that had an immediate and pronounced effect on the major oil producer’s balance of payments.

This has significant implications for Kazakhstan’s overall economy, as the oil sector accounts for an estimated 20% to 30% of Kazakhstan’s GDP and more than 50% of budget revenue, according to Standard & Poor’s.

Kazakhstan’s merchandise has worsened significantly since oil prices began falling in mid-2014, as the second bne:Chart illustrates. As a percentage of GDP, the trade surplus has declined 9.7% as the oil price fell from $105 a barrel to $65, which is worse than Russia’s 5.2% fall in its surplus. 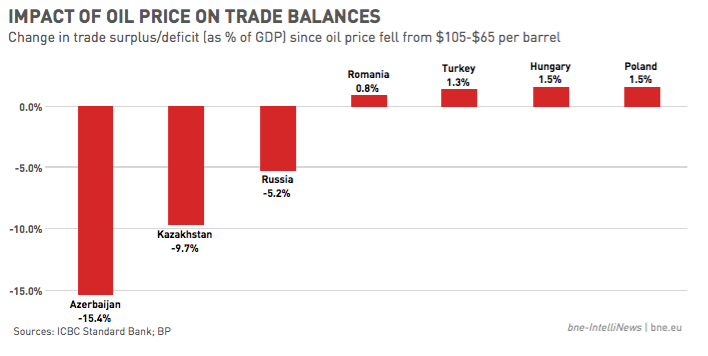