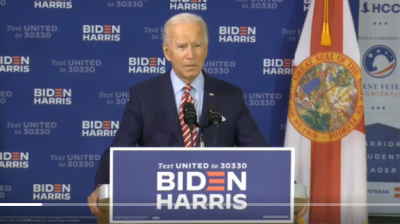 “There is a smart way to be tough on Iran, and there is Trump's way,” said Biden.
By bne IntelIiNews September 15, 2020

Joe Biden has said that he is “ready to walk the path of diplomacy” with Tehran “if Iran takes steps to show it is ready too”.

Outlining the Iran policy he will pursue if he defeats US President Donald Trump in the November presidential election, Democratic candidate Biden in an opinion piece for CNN added: “If Iran returns to strict compliance with the nuclear deal, the United States would rejoin the agreement as a starting point for follow-on negotiations.”

“The bottom line is that Iran is closer to a nuclear bomb today than it was when Donald Trump took office. And Trump has no answer for that. Five years ago, even Russia and China stood with our European allies behind an American-led approach to Iran's nuclear program,” said Biden, attacking Trump for in May 2018 unilaterally pulling the US out of the nuclear deal between Iran and six major powers that secured concessions on and scrutiny of the Iranian nuclear development programme in return for the lifting of UN sanctions on Tehran.

Biden said he would “make an unshakable commitment to prevent Iran from acquiring a nuclear weapon” but that “Trump's Iran policy is a dangerous failure” and that “there is a smart way to be tough on Iran, and there is Trump's way”.

Trump, he said, had ignored our closest allies—the UK, France and Germany, who along with Russia, China and Iran remain signed up to the JCPOA—and “walked away—alone, without a plan—from a deal that put the world's eyes and ears inside Iran's nuclear program and was verifiably blocking Iran's pathways to a nuclear weapon”.

Biden also noted: “Five years ago, American-led diplomacy produced a deal that ensured it would take Iran at least a year to produce enough fissile material for one bomb. Now—because Trump let Iran off the hook from its obligations under the nuclear deal—Tehran's "breakout time" is down to just a few months.”

Iran has always claimed its nuclear programme is purely for civilian purposes.

On August 8, Kazem Gharibabadi, Iran's ambassador and permanent representative to international organisations, in Vienna asked the IAEA to investigate what he called the "covert" nuclear programme of Saudi Arabia.