BEYOND THE BOSPORUS: End of Cold Turkey? How long will the latest hot money party last? 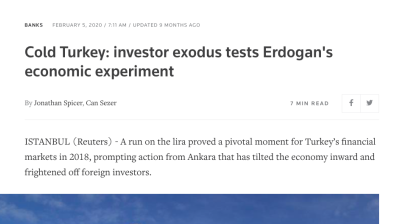 The Erdogan regime is a hot money junkie. And it's back for more.
By Akin Nazli in Belgrade November 12, 2020

November 12 marked the end of the frequent struggle to work out whether it is hot money flows or the Turkish government’s invisible hand that is keeping Turkey’s markets afloat.

Turkish President Recep Tayyip Erdogan had stepped forward the previous day and, in so many words, declared that if required he would permit “bitter pill policies” if that was what was required to get the party shakin’ and a groovin’. The market-maker news services promptly put the music on.

Within 24 hours, the Turkey bloodhounds were lapping up big currency gains and 10%+ interest rates, swapping their lira for Turkish banks’ FX.

“BUY TURKEY” notes were raining down. There’s not a financial institution left that hasn’t issued one.

We have of course seen these parties before. And each time, the party ended in the cop shop.

This latest bash, however, has started out with a particularly wild mood, the likes of which has not been seen in a long time.

Let’s take a look at what could take the wind out of its sails.

1-) Erdogan can start talking in the wrong direction at any time and the market-makers can’t avoid the shower of manure that might follow.

Imagine the Boss decides to give an unexpected speech somewhere out in the Turkish provinces and out of nowhere headlines start crowding your trading screen:

BCD: 11:53 TURKEY INVESTORS FIGHT TO GET OUT THE DOOR.

Bargains struck over the seemingly bolted-on hike in the main policy rate continue apace. At the moment, the finance industry wants a minimum 200bp. The stake will most probably rise.

Take care, the lira vultures may hand over Turkish assets to slower-arriving lira bulls if Erdogan does not surprise the market with a 100bp+ spread over the market expectation. Such a positive surprise is a small possibility as things stand.

Given that there is a higher probability that Erdogan wants to wave through something lower than what the finance industry wants, the lira vultures may already be passing on Turkish assets to the lira bulls and might certainly be doing so before the clock strikes 14:00 Istanbul time on November 19.

If Erdogan does not pull the plug on the shindig with a shock decision to hold the benchmark rate (there’s a low possibility of that at the moment), the party might continue with a lower-than-expected rate hike, though some people would get bored and leave.

We’re in mid-November and many people will close their positions before the Christmas break.

Erdogan has a scheduled monetary policy committee (MPC) meeting on December 24. The serving of an appetiser on November 19 and inviting people to stay at the Casino Erdogan Royal Hotel for Christmas may be on the cards, but there’s no need to speculate so far and create confusion at the moment.

“Sleepy”—you know, the guy keeping THE LOSER awake at night—has already, without lifting a finger, drastically altered the career trajectories of some ministers, officials and sons-in-law at the Bestepe Palace in Ankara and in the Kremlin.

We shouldn’t expect any drastic moves by the new Mr President against Erdogan but that doesn’t stop certain headlines from rolling down your trading screen:

The US Congress may also show up in the picture during the budget process.

The markets right now seem happy with the liquidity sloshing around and are not particularly bothered by the virus. However, at any point of time, virus bears may show up during the winter. The situation with infections in the US is out of control. But Donald is watching television. Turkey might have the worst outbreak in the Middle East. Though you can’t know that because Erdogan does not release the figures.

6-) Erdogan cheats the markets by pumping lira to his voters but the market-makers say little to nothing.

The president’s “bitter pill” promises may be in circulation, but the number of people in Turkey committing suicide because they can’t feed their families has been on an upward trend for years. The situation is a little fraught shall we say.

If loan growth and fiscal spending continue at a fair clip, the market-makers may not be able to draw the curtain around it.

There’s big comedy value to be had in the fact that the markets are partying again while there is a fight under way at the Ankara palace. At a certain point will it no longer be possible to conceal it from the market?

This is Turkey. Even Zeus, whose home is still being destroyed by Canada’s Alamos Gold, does not know what will happen in the next 10 minutes here.

The cops may raid the party and cut the music at any time.