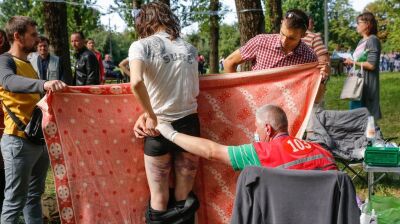 Belarusian President Alexander Lukashenko has changed the law to make resisting arrest or insulting a police officer a criminal offence that carries a jail sentence of several years / wiki
By bne IntelliNews November 11, 2020

Belarus' self-appointed President Alexander Lukashenko has ramped up the risk of protesting by making it a criminal offence that carries a sentence of only two weeks in jail, but could result in several years in jail, it was reported on November 11.

Under the current rules most protesters that are detained are charged with an administrative offence that usually carries a sentence of 15 days in jail.

Since the start of the protests immediately after the August 9 presidential elections that were massively falsified by the incumbent to give himself a landslide victory, more than 17,000 people have been detained. The vast majority are released within a few hours, or at most a few days.

The more prominent protesters like Maria Kolesnikova, who was one of the three women that ran against Lukashenko, are serving sentences of several months that, in her case, has already been extended.

The most prominent opposition leaders like Sergey Tikhankovsky, a famous blogger and the husband of opposition leader Svetlana Tikhanovskaya, have been charged with treason and conspiring to incite a riot that will carry a sentence of up to 15 years, if he is convicted. Likewise, ex-banker Vladimir Babariko, who was the favourite to win the elections, has been charged with embezzlement that also carries up to a decade in jail as a sentence.

“Since the start of the presidential election campaign, more than 900 criminal cases were opened against protesters and Lukashenko’s rivals. That’s criminalisation of any political activity. There are 2,000 reports collected on torture, but no case was opened against police officers,” tweeted Hanna Liubakova, a local journalist, citing the results published by local NGOs that are detailing the atrocities metered out by the police.

Few of the protesters that attend the traditional mass rallies on Sunday are charged with criminal offences like conspiring to incite a riot, but a few have been.

Now Lukashenko has changed the Belarusian criminal code to transform things like insulting a police officer and resisting arrest from administrative offences into criminal offences that carry sentences that stretch into years. Moreover, any violence perpetrated against a police officer will now be prosecuted as if it were a murder case and sentences can include a possible death sentence.

In the 2010 riots that followed elections in that year, two young men were executed by Lukashenko’s regime on terrorism charges despite an international outcry and calls for leniency.

The change in the law is clearly part of Lukashenko’s strategy of ramping up the pressure on the opposition to his continued rule by the population.

Following Tikhanovskaya’s failed call for workers at the leading state-owned enterprises to join a general strike that was supposed to begin on October 26, the protest movement has lost momentum. While tens of thousands still turned out for the mass demonstrations on the most recent Sunday march the numbers were well down on the 100,000-plus that have been attending these rallies.

The reduced crowd size has made the police’s ability to control the crowds, and more importantly to arrest demonstrators, easier. Last weekend over 1,000 protesters were detained – the highest number since the first days of protests, when the police responded with a brutal push-back and detained 6,000 in just three days before backing off.

The police have also slowly become more violent, making more use of flashbangs, tear gas and firing blank ammunition from shotguns over the heads of the demonstrators.