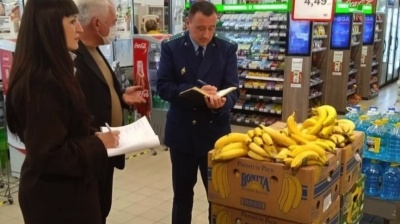 A picture showing a Belarusian official inspecting prices in a grocery store in Minsk shortly after Lukashenko gave the order to "prohibit" price increases on October 6. / https://twitter.com/HannaLiubakova
By bne IntelliNews October 21, 2022

On Thursday, October 20, Belarus’s council of ministers introduced a new price regulation system aimed at curbing the rapidly growing inflation in the country by controlling price increases of manufacturers and retailers.

On October 6, Belarusian Strongman Alexander Lukashenko’s controversial statement of “prohibiting” inflation garnered international attention. During a meeting with his government on Thursday, Lukashenko explained that his order to “freeze” prices was only meant to last until the government resolution on a new price regulation system came into force.

According to Lukashenko, he understood the problem of inflation “perfectly well” and claimed that the reason was that state and private enterprises had grown “too fat” from unreasonable price increases. While the new price regulation will apply to manufacturers, wholesalers and retailers, Lukashenko noted that they could not affect the price increases of certain imported goods like coffee or bananas. Lukashenko’s solution to Belarusian consumers was to switch to cheaper products: “Switch to milk, tea. I don't drink coffee and I'm doing fine.”

Lukashenko noted that his ministers were under “huge” pressure and were frequently trying to contact him about the problems of price regulation. He claimed that shop assistants were being made to instigate against the authorities, and that “foreign burghers” were trying to order price increases by undermining the Belarusian authorities. To people who tried to circumvent the price controls, Lukashenko said that “if you don't understand state requirements, then, man, we have different roads to travel.”

The new price regulation system that came into effect on Thursday will regulate price changes for all consumer goods. Domestic manufacturers will need approval from various government bodies, regional executive committees as well as from the Minsk City Council to raise their selling prices.

While Lukashenko himself admitted that they are unable to control price increases of certain imported goods, the new system also imposes regulations on imported consumer goods. It imposes markup caps for Belarusian importers and retailers, which must be adhered to regardless of the number of intermediaries involved. The prices of goods that were imported before the government resolution came into force have to be brought into line with these markups within five working days (i.e. on Wednesday, October 26).

Furthermore, in order to regulate transactions, barter deals are restricted and require the approval of government agencies. Bonuses or other reimbursement for promoting the export of Belarusian goods are also forbidden.

To monitor compliance with the new resolution, “public authorities” have been given additional powers. According to Lukashenko’s original order to prohibit price increases, "people guilty of non-fulfilment or improper fulfilment of the order bear liability, including criminal.” His order gave additional powers to Belarus’ Prosecutor General's Office and State Control Committee for prosecuting those who violated the order, including imprisoning them.