Belarus' flower man given 8.5 years in jail, tells court of his harrowing treatment and torture 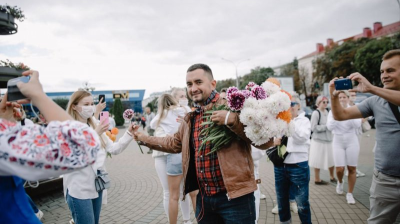 A year ago Stepan Latypov wanted to honour the protesting women of Minsk so took a huge bunch of flowers to a central square and started handing them. This week he was sentenced to 8.5 years in jail for his crime. / wiki
By bne IntelliNews August 17, 2021

​​A year ago Stepan Latypov (Stsyapan Latupau) went down to one of the main squares in central Minsk and started to hand out flowers to the women he met there.

The women of Minsk were holding their own women’s protest on that Saturday in solidarity ahead of the main mass demonstrations that happened every Sunday. Latypov wanted to honour their courage and arrived with a huge bunch of flowers and started handing them out.

Video taken by passer bys and posted on social media show the smiling Latypov laughing and joking with the women as he distributed the flowers with onlooker appalled him.

He was later arrested, grabbed from the street by masked OMON officers who severely beat him for his act of chivalry. Latypov was arrested and taken to a detention centre where he was further tortured, claim the opposition. When his case finally came to trial seven months later in May he took a pen from his pocket and cut his own throat.

Police scrambled to find the keys to the courtroom cage in which he was being held and the first aid they gave him saved his life.

“His last words before he cut his throat were: "GUBOP (the most infamous police unit in Belarus) promised that if I don't plead guilty, there will be criminal cases against my relatives and neighbours," Tadeusz Giczan, the editor-in-chief at the opposition Nexta Telegram channel reported.

Latypov was back in court this week as his trial came to an end. He has been sentenced to 8.5 years in jail for the crime of honouring the women of Belarus with flowers.

Below is an edited version of his closing statement to the judge.

“My name is Stepan Latypov. I live in an apartment in a building at Smorgovsky tract. For me, this is the best place on earth. This is my homeland. This is the place of power for me.

This is my dream which came true — dream about a house where you can live, get together with your neighbors, where you can, as it was customary in villages back in the distant 80s in the Soviet Union to go to a dinner with a neighbour without warning, just because you wanted something to eat and did not have time cook. Where all conflicts are resolved together, peacefully, without any aggression.

I was happy to live in this place. It was filled with happiness, joy, it gave me energy and, at times, even brought some kind of euphoria. But this happiness did not last long.

On September 15, 2020, men in balaclavas brought me into a minibus. They tied my hands behind my back, put a trash bag on my head and then brought me into Peoples' Friendship Park (they've transferred me 2 times on the way, but it was in my district so I knew where I was).

Then, there was a beating: they turned on the radio at full volume and started to beat me. I have never ever felt that much fear in my entire life. People in balaclavas were beating me with their hands, legs and batons.

I've heard recently such a term "intramuscular hematoma", perhaps it was that. I was screaming while suffocating in a black plastic bag, and they were laughing. They said: "Now it's time to learn the alphabet. Now we ask you the letter 'A' and we will start to teach you 'B'.

They said: "Don't scream, your Tikhanouskaya won't hear." But I kept screaming. I was screaming and thinking, "It's very good that they took me, and not my neighbors, because very few can stand it.”

When I felt more pain than I could bear, I recalled my mom's words. She taught me to say, "I am a little-little hedgehog, and it doesn't hurt at all." And this helped me for a brief moment. But they knew their business, they kept calling me by name, so I couldn't drift off.

Then there was a raid and interrogations at the Investigative Committee. If I had not seen my neighbors that day, I would have agreed with all the accusations people in balaclava have made: riots, chemical attacks, whatever.

I did not have a single bruise, even the plastic ties did not leave any marks on hands. Only the sound of horror was left in my memory.

And I started to be afraid. I was petrified that people in balaclavas could do something else, not because they needed it for business, but just for fun. And that no one would stop them.

And they hid their eyes and said: “On a human level we feel for you, but there is nothing we can do about it.” They asked me to hold on. I want to thank them for their understanding, for those tiny indulgences that made my life a little easier. […]

The horror I have gone through can justify a lot. When fear for oneself ends, fear for loved ones begins. […]

[During his trial Stepan Latypov revealed that the authorities threatened to open criminal cases against his relatives and neighbors.]

Right after that interrogation I've started to prepare for the suicide. At each following interrogation, at each meeting with a lawyer, I took a small piece of foil, choosing the shape and size such that it could not be detected by prison guards.

A recidivist killer for a pack of coffee told in detail how the guards performed the search, and a professional pickpocket taught me how to hide a blade. Later I was advised to wrap the metal with a piece of plaster so that it did not slip on my fingers.

I simply pasted the plaster on a folder with documents and wrote on it with a pen. Then I pasted it on my jacket, and no one noticed. And no one noticed that for the first half of the court hearing I was weaving a gag, so I could go away with dignity, without squealing in pain.

It was painful. It was excruciating and scary. My goal was to cut at least one of the carotid arteries. I did not succeed in cutting it on the left side, but on the right side, due to the incline to the left, I did manage to cut it through.

And I felt warmth under my fingers. I even managed to hook the artery, but being nervous I pulled further, instead of going deeper along the trachea. Then the guard pulled me by my leg, I hit my head and fell.

I was feeling pain, fear and shame. Shame — because the attempt was unsuccessful. And because of the fact that there were many ways to protect my loved ones and neighbors, which did not occur to me at that moment.

[…]Your Honor,[…] I try hard to see in you not a judge, but a person, a citizen, a professional in his field. That will help me not to hate you, and instead to try to understand you, understand your situation of a person who found himself, perhaps, in a difficult position.