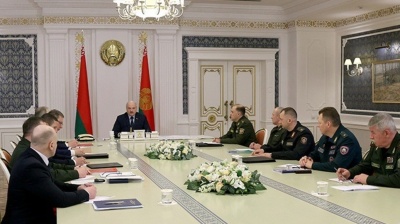 President Lukashenko during his special operational meeting with the military on Thursday. / Belta.by
By bne IntelliNews February 24, 2022

Belarus, which once flaunted its fragile independence from Moscow, is now merely a launch pad for Russian President Vladimir Putin’s invasion of Ukraine.

Russia troops have invaded Ukraine from the south, east and north – including Belarus, which offers the closest approach to the capital Kyiv.

Ukrainian authorities have announced that a Russian helicopter from the Belarusian side of the border fired on a Ukrainian bridge; photos have been published of a Ukrainian border post with Belarus which was bombed to pieces; cruise missiles have been spotted flying into Ukraine from what appears to be Belarus’ Mogilev region.

Videos have been published on various social media platforms showing tanks moving into Ukraine from Belarus’ Gomel region in south-eastern Belarus. Every hour, new videos are released from the Minsk, Gomel and Mogilev regions, showing convoys of Russian technical military equipment being transported towards Belarus’ border with Ukraine.

Earlier this month, US diplomats warned Minsk of harsh sanctions as well as the risk of discontent among the Belarusian political elite if President Alexander Lukashenko allowed an invasion of Ukraine to be launched from his territory.

At the time, Belarusian diplomats shrugged it off, calling it nonsense; but this morning, it is now clear what the Russian troops initially said to have been stationed in Ukraine for the “Allied Resolve” exercises were really there for.

Today, Lukashenko held a special “operational meeting” with the military in Minsk to discuss the current situation in the region. Lukashenko condemned reports of Belarusian troops participating in the “operation”; however, he added that "we will not make excuses about our involvement or non-involvement in this conflict. I repeat: our troops are not there. But if such need arises, if Belarus and Russia need this, they will be there."

According to Lukashenko, the decision on recognising the Ukrainian breakaway republics of DPR and LPR in the east is on the agenda and will be decided upon in the near future.

Furthermore, Lukashenko suggested that Ukrainian President Volodymyr Zelenskiy sit down with Putin in Minsk for negotiations. "What else is needed? This is the base for negotiations. He [Putin] is indeed not going to occupy [Ukraine],” Lukashenko said. “Who would want this kind of headache? No one is going to plant forces and governments there. This is a basis for negotiations. Let's work out an agenda and solutions on this basis."

Belarus’ opposition leader Svetlana Tikhanvoskaya in her address to Belarusians and Ukrainians on February 24 said on behalf of all Belarusians that she was deeply ashamed of her country’s participation in this war. She urged Belarusians to create an anti-war movement and to defend the very existence of their country.

Belarusian opposition politician Pavel Latushko in his address pointed out that Ukraine was actually fighting for the freedom of all of Europe and that Lukashenko is fully responsible for the military aggression against Ukraine. Latushko urged all Belarusians to support Ukraine, calling the current situation a civilizational choice for Belarusians.

According to Latushko, now is the time to choose whether they want to “live in a sovereign country where human rights and freedoms are respected, in a state that determines its own foreign and domestic policy, or to become a satellite of the Russian Federation.”

Tikhanovskaya has announced the creation of a transitional cabinet as the national authority of Belarus. According to Tikhanovskaya, she would represent the Republic of Belarus and its people by the powers given to her by Belarusian voters in the 2020 presidential elections. The creation of this cabinet was backed by Latushko, who is currently leading the "National Anti-Crisis Management", which aims to facilitate a peaceful power transfer in Belarus.

The streets of Minsk were calm on Thursday, with the regime having scared the population from showing any public dissent throughout the last year and a half of repression.

Lukashenko today rules a country which has lost its legitimacy for large swathes of the population because of the domestic repression, which has lost significant financial and trade connections with the global market, and from which its citizens can’t even fly to Western Europe. Whether it will ever regain its previous shakey independence is now doubtful.

The country’s macroeconomic situation is also becoming worse by the hour. Fears of harsh sanctions are taking a heavy toll on Belarus’ banking sector and large Belarusian banks are reported to have had problems with currency exchanges. In the Mozyr region, people of Belinvestbank were seen emptying safes full of currency. Throughout Minsk, there are reports of long lines at ATMs of several banks, with several banks having run out of currency and bankcards issued by Belarusbank having stopped working.

The Belarusian ruble’s (BYN) exchange rate against the dollar hit a record low on Thursday, with both Priorbank and Belarusbank having completely stopped showing the progress of the BYN’s exchange rate. While Russia’s Central Bank announced that it would conduct financial operations to stabilise the Russian ruble’s (RUB) free fall, the National Bank of Belarus (NBRB) has kept silent, just hoping to ride out the storm.

Regardless of the outcome of this war, Belarus will lose immensely. Sanctions will cripple the financial sector and are likely to further escalate the trade war which Lukashenko already has going on with the Baltic states, which used to be the transit countries for much of Belarus’ exports. Even if Belarus acquires an alternative port on Russian territory near St Petersburg, the costs of building it, and the increase in transport costs because of the distance, will depress profit margins for the regime. Belarus has also lost access to the market of its important trade partner Ukraine due to the war, and future trade is likely to be depressed for some time, regardless of what happens in the fighting.

Belarus remains financially dependent on Russia. It is likely that in exchange for new loans from Russia to prop up his regime, Lukashenko agreed to help facilitate this invasion. Last week, Russia’s finance minister announced that Belarus might receive new loans to cover its old debt. However, after this announcement the Eurasian Stability and Development Fund rejected the request to refinancing Belarus’ state debt, leaving Minsk at a serious risk of default.

Foreign investment has transformed Eastern Europe, says wiiw report
18 hours ago
Will Croatia’s latest shot at World Cup glory ease economic slowdown?
1 day ago
Belarus’ government to expand political-economic control at the expense of economic growth
2 days ago
Sino-Russian ties continue to deepen as Western sanctions drive their economies together
2 days ago
War and wine: how rattled economies in Ukraine and Russia are pushing Georgian winemakers to pivot to new markets
3 days ago