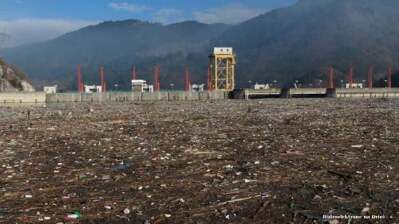 When huge islands of floating waste borne by several rivers in Southeast Europe started to threaten hydropower plants in January, governments were quick to announce clean-up efforts. But the problem is a recurring one and can only be solved by better waste collection and management in the region.

Heavy precipitation across large parts of Southeast Europe raised water levels in rivers and caused some to overflow their banks. The elevated waters bore with them tens of thousands of cubic metres of waste tossed into waterways or discarded on their banks.

The alert was raised in Bosnia & Herzegovina on January 4 by Nedjeljko Perisic, head of Hidroelektrane na Drini, a company operating the Visegrad hydropower plant (HPP) on the Drina, an alpine river that flows across Bosnia and along Bosnia’s border with Serbia before joining the Sava, a major tributary of the Danube. Perisic warned that around 4,000 tonnes of waste had arrived at the crown of the dam at Visegrad after a chain holding it back broke, endangering the functioning of the HPP. Much more waste was already floating down the Drina’s tributaries in Bosnia, Montenegro and Serbia towards the dam, according to Perisic, picked up from improvised landfills on their banks.

More waste was accumulating at the Potpecko dam in Serbia on the Lim river, one of the Drina’s tributaries, Balkan Green Energy News reported, quoting Predrag Saponjic, director of HE Limske, which runs the HPP.

Later in the month, heavy rains also significantly raised the water level of several rivers in Bulgaria. A huge floating island of branches and urban waste was reported on the Iskar river near Sofia, covering an area of between one and 1.2 hectares, according to the Sofia region governor Ilian Todorov, quoted by news agency BTA. There was a similar crisis close to the city of Burgas.

Local NGOs Za Zemyata (For the Earth) and Greenpeace Bulgaria organised a small protest outside the Ministry of Environment and Water on January 21, placing a sculpture made out of plastic bottles outside the building to highlight the problem of plastic packaging pollution. “We demand that the [ministry] introduce a system of waste management and control, in particular, the separate collection of plastic waste and the introduction of a deposit system for all plastic bottles,” said the demonstrators.

As the waste on rivers in Bosnia, Bulgaria and Serbia threatened HPPs, officials were quick to announce action. Serbia’s government said on January 7 it would take urgent steps to clean up waste floating in Potpecko lake, and said power company Elektroprivreda Srbije would work with the Bosnian company to remove the waste around the Visegrad HPP.

Bulgarian Prime Minster Boyko Borissov, meanwhile, announced that the clean-up on the Iskar river would start immediately following an extraordinary cabinet meeting on January 15, reported BTA quoting the government information service. The cabinet made BGN220,000 (€112,400) available for the clean-up. "The mayor and the regional governor must find a way to start the clean-up posthaste, even tomorrow if possible. We do care about the environment,” the prime mister said.

However, Za Zemyata argued that launching a clean-up alone would not address the root of the problem. "It's not enough to clean this island of plastic. The measures should be much more comprehensive. In fact, cleaning at the PM's orders, without having crafted mechanisms to deal with plastic pollution, are symptomatic of the ‘hood after the rain’ approach,” the NGO said in a Facebook post.

“People have shown repeatedly that they want bold measures. Plastic pollution is a visible problem. Separately, this island is hardly the only one in Bulgaria, considering how inefficiently the garbage is collected in many places. Will every such island be cleaned only after pressure from indignant citizens?”

Huge islands of waste are not uncommon on rivers in the region – or indeed in other parts of the world. Elsewhere in Southeast Europe, the Shkumbin river in Albania, which has one of the continent’s lowest waste collection rates, is notoriously polluted. German development agency KfW, which is supporting controlled waste recycling and disposal in Albania, writes of the Shkumbin river: “This is the route waste takes to the sea. Waste is left on the banks in spots where the river overflows. In some places, waste hangs from trees, forming bizarre works of art.”

Sonja Gebert, co-ordination specialist for the United Nations Environment Programme (UNEP) Global Environmental Finance (UNDP-GEF) unit, tells bne IntelliNews that ultimately the core of the issue “is that the countries do not cover the entire population and all sectors with waste collection services.” In the Western Balkans, only around 60-70% of the population is covered by waste collection services, meaning that 30-40%, often those in remote or mountainous areas, have to dispose of waste as best they can by themselves, which often means throwing it into waterways.

While the focus is often on plastic waste because it floats and so is highly visible, Gebert says the problem goes beyond plastic to other forms of household and toxic industrial waste. Improving waste collection and management, she says, can only happen if people are willing to pay taxes to cover it. West European countries such as Austria carry out waste collection in mountain areas that are not very different from those in the Western Balkans, but this is expensive.

Even when there is some form of waste management, it may not solve the problem. “The example with the Drina is a tragic circular cycle, with reports indicating that waste pulled from the river is dumped on a local landfill that is typically on fire. The problem? Well, it apparently creates a toxic liquid that flows back into the river, thus threatening the local ecosystem, not to mention the local community that is just 4 km away. We far prefer a circular economy over this type of circularity!” Tod Hardin, chief operating officer of NGO Plastic Oceans, tells bne IntelliNews.

He says that "any number" of factors can contribute to the accumulation of waste in rivers "including such things as waste management, water treatment, infrastructure, socio-economic factors, weather, illegal dumping, population and even culture".

And the presence of large amounts of waste in rivers is a global problem, not just one for the countries the rivers flow through, because ultimately much of the waste ends up in the world’s oceans.

Dr. Bernhard Bauske, senior advisor to the World Wildlife Fund’s Marine Litter Reduction Programme, quotes a global overview by Nature Communications which “estimated that between 1.15mn and 2.41mn tonnes of plastic currently flows from the global riverine system into the oceans every year. The overall figure of input of plastic debris into the oceans is estimated with a figure of 4.8mn-12.7mn tonnes of plastic annually.”

“The input via rivers has a major share of the input of plastic debris from land,” says Bauske, though notes that the data are very rough calculations as they are based on the share of mismanaged waste and population figures.

A separate 2017 study by the Helmholtz Center for Environmental Research indicates that rivers account for up to a quarter of the plastic waste entering the oceans. Ten rivers, eight in Asia and two in Africa, are responsible for around 90% of the global riverine input of plastic into the sea, according to the report.

To attempt to hold back the floods of waste in the Western Balkans, authorities have put up barriers on various rivers, but these are not always able to withstand severe conditions. The build-up at the Visegrad dam in Bosnia was partly attributed to the breaking of a chain holding back waste. With the mouth of the Shkumbini river in Albania often “full of waste” according to KfW, there have also been two attempts to install barriers to catch the waste before it flows into the Adriatic Sea – to the consternation of Albania’s neighbours, which find waste washed up on their beaches.

As local populations become increasingly concerned about the damage to their rivers and countryside, numerous large-scale clean-up operations have been launched, often organised by civic organisations and carried out by volunteers. Among them are the annual Plastic Cup race on the Hungarian section of the Tisza over that also flows through Ukraine, Serbia and Romania. In 2018, 400 volunteers took part in the race in boats made of recycled plastic, picking up more than 10 tonnes of waste on the way. In a pleasing example of circularity, around half of the waste collected was sent to be made into furniture by the Belgium company Waste-Free Oceans, while the rest was recycled locally.

Yet while clean-up actions like this have a big impact on improving conditions as well as raising awareness, without action to stop the waste getting into rivers and onto river banks in the first place, the problem will return. As Gebert points out, only proper waste collection services that give people a better option for their waste disposal than throwing it into a river will solve the problem in the long term.