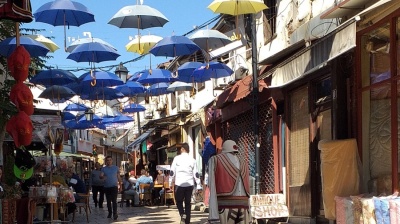 North Macedonia, formerly only Macedonia, has been an EU candidate since 2005.
By Valentina Dimitrievska in Skopje July 11, 2022

There is no sign of a quick end to the protests and road blockades in North Macedonia against the French compromise to unblock the country’s EU accession negotiations.

The opposition VMRO-DPMNE party, much of the Macedonian population and many domestic and international experts claim that the new French proposal is unfair and is not the best solution for North Macedonia.

The outgoing EU presidency’s proposal is aimed at removing Bulgaria’s two-year veto on the launch of accession talks, but the scope of the compromise remains unclear as the bilateral protocol between Skopje and Sofia is still being kept secret.

North Macedonia, formerly only Macedonia, has been an EU candidate since 2005, but the integration process was blocked first by Greece – later solved with the Prespa agreement on the country’s new name – and then by Bulgaria, over recondite historical and linguistic issues.

During the protests over the 2018 Prespa agreement, people were still optimistic that the concession would open a EU-Atlantic perspective. But while North Macedonia obtained Nato membership in 2020, the EU integration process stalled again, this time due to Bulgarian pressure. Some say that North Macedonia is now moving towards its own Brexit even before the EU negotiations have started.

The Parliament of Bulgaria, which has maintained a hardline position on North Macedonia, accepted the original French proposal on June 24, one day after the EU-Western Balkan summit in Brussels, opening the way for Skopje to start EU accession talks under certain conditions.

Bulgaria has stated that four conditions should be met by Skopje, including a guarantee that nothing in the process of North Macedonia’s EU accession could be considered an admission of the existence of the Macedonian language, which nationalist Bulgarians regard merely as a dialect of Bulgarian.

North Macedonia’s Prime Minister Dimitar Kovacevski rejected the proposal a day before the vote in the Bulgarian parliament, but later Skopje said that their concerns were addressed in a modified version of the proposal.

The French proposal has been forwarded to the parliament for adoption, but the session has not yet been scheduled.

The government has launched consultations with all North Macedonian political players to make the process more transparent, but the rightwing VMRO-DPMNE refused to accept the proposal and launched protests and road blockades. Evening protests started on July 2 and have continued every day since, with the exception of the Muslim Feast of Sacrifice holiday on July 8-9.

The protests are even bigger than those over the change of the country’s name. Violence and incidents have been reported on several occasions, with police officers injured and reports of a gun being fired in the air.

In one protest, 47 police officers were injured, 11 of them seriously, while two officers with serious injuries were hospitalised. Eleven protestors were detained, two of them minors.

The devil is in the details

North Macedonia has been plunged into uncertainty by the EU’s unclear and ill-defined enlargement policies, which, through the French proposal, have allowed the insertion of bilateral issues into the negotiation framework.

The government has published the Macedonian, Albanian and English language versions of the modified French proposal on the official website, but experts and the public cannot make a real assessment of it without the publication of the bilateral protocol with Bulgaria, which contains the Bulgarian conditions, and for now is kept secret.

Outgoing Bulgarian Foreign Minister Teodora Genchovska said earlier that the protocol is already agreed on by both sides and is final. This has created different interpretations and many doubts, with many fearing that the secret clause contains controversial and unacceptable demands on North Macedonia.

Pro-opposition media have reported that the Bulgarian foreign ministry has indicated that the bilateral protocol is an integral part of the negotiation framework, and that North Macedonia will not really start negotiations with the EU until it changes its constitution, textbooks, renames monuments and many other conditions.

Albania, which is coupled in the EU integration process with North Macedonia, will have a head start in the EU negotiations, while North Macedonia will only have a pro-forma photo session for Kovacevski and Foreign Minister Bujar Osmani in Brussels, after which they will have to fulfil the Bulgarian ultimatums.

Under the proposal there will be two crucial intergovernmental conferences, the first marking the official start of the legislative screening process, while the individual negotiating chapters will be opened only after the second conference. Before that conference, North Macedonia must put ethnic Bulgarians into the constitution as a constitutional nation, which requires a 2/3 majority in the assembly.

The initiator of the proposal, French President Emmanuel Macron, has assured the Macedonian people that the agreement does not call into question the existence of the Macedonian language.

But the EU document says, “Regarding the translations of the acquis into Macedonian, the EU took note of Bulgaria and North Macedonia’s respective unilateral declarations on the Macedonian language”.

It is unclear how Bulgaria’s continued refusal to recognise the Macedonian language will affect the future accession process.

Many Macedonians reject the French proposal, which they argue would force them to succumb to Bulgaria’s chauvinistic demands and could endanger their Macedonian identity.

“The French proposal, on the one hand, will open an opportunity for Macedonia to start EU negotiations, but on the other hand, I think it is harmful to national interests. In this case, one member state, Bulgaria, is violating the basic principles of democracy on which the EU is based, to the detriment of its neighbour,” Vanco G. from Skopje told bne IntelliNews.

The opposition VMRO-DPMNE clearly wants to use the situation to push for snap elections and regain power, which it lost in 2017 after a series of corruption scandals.

“The people unequivocally, massively and firmly say ‘no’ to the ultimatum and blackmail contained in the proposal, which the Kovacevski government is ready to accept and thus allow the Bulgarisation of [North] Macedonia,” VMRO-DPMNE said in a statement.

The opposition party claims that by accepting the proposal, the government also agrees to change textbooks, historical facts, to change the constitution and accept other humiliations. “In one word, the government accepts Macedonia to either be involved in endless negotiations or to accept absolute assimilation,” it said.

“When the government sells out the state and national interests, then the people protect them through peaceful and dignified protests,” VMRO-DPMNE warned.

The opposition party said that if the government decides to pursue this process contrary to the will of the people, then VMRO-DPMNE will try to block it and will vote against constitutional amendments.

Dimitar Apasiev, a law professor who leads the pro-Russian party Left party, told Voice of America on July 8 that negotiations with the EU should not be stopped, but identity issues should be preserved.

Apasiev, whose party supports and participates in the protests, did not reveal his next steps. “We will play strategically,” he said. He believes that tensions are possible in front and inside the parliament.

He said that geopolitical tectonic shifts are taking place and “we need to take the course of the new world order, in which the EU will only be a servant of America, as it is now”.

For him there are other alternatives to the EU.

“See the Serbian example! You have the Non-Aligned Movement, where [Serbian President Aleksandar] Vucic  is involved. You have the BRICS, [a grouping of Brazil, Russia, India, China and South Africa] you have [China’s] Belt and Road Initiative. Also, the European Economic Zone is one of the alternatives, as well as the Open Balkans, which is an old leftwing idea for a Balkan confederation,” he said.

Open Balkans is an existing initiative of Albania, North Macedonia and Serbia for free flow of people and goods and regional cooperation.

Florian Bieber, director of the Centre for Southeast European Studies at the University of Graz, said in a tweet last week that instead of an easy way out, the French proposal will further taint the reputation of the EU and bury the enlargement process.

Bieber said that the French proposal for unlocking the Bulgarian blockade is a disaster for enlargement. “While it looks good to end the Bulgarian veto, it achieves little and holds great dangers,” he said.

Among other dangers he said that it incorporates the bilateral dispute into the EU negotiating process, giving legitimacy to future EU members blocking accession countries, and it is unbalanced as it is considerably closer to Bulgarian demands than the Macedonians position.

The future of the French proposal remains therefore very much in doubt.

North Macedonia's President Stevo Pendarovski has accepted the modified French proposal, but said even if the country holds the first intergovernmental conference it will be difficult for the assembly to provide a 2/3 majority to vote for constitutional changes to allow ethnic Bulgarians to be incorporated in the constitution.

Pavle Trajanov, leader of the small Democratic Union, part of the ruling coalition, believes that if the parliament rejects the French proposal, then the proposal should go to a referendum.

Experts and the opposition also point out that Bulgaria might also try again to block the process during the negotiations, which may then turn out to be endless, trapping Macedonia in a situation where it has to make more and more concessions to its touchy neighbour.