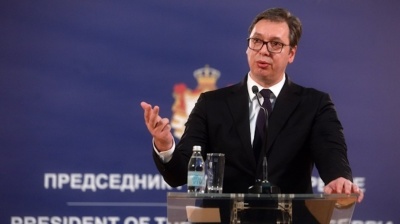 Aleksandar Vucic has repeatedly resorted to snap elections to reinforce the position of his Serbian Progressive Party.
By Clare Nuttall in Glasgow March 27, 2019

As protests show no signs of letting up in Serbia, President Aleksandar Vucic has confirmed speculation that the government led by his Serbian Progressive Party (SNS) will call early elections.

No date has been set yet but the SNS leadership has decided that it wants an early vote, Vucic told the media on March 25, and the country is now “closer to early elections than before.”

The decision comes after almost four months of mass protests that have taken place every Saturday evening since December 8. Protestors have focussed on Vucic’s autocratic rule, and the stifling of the media since he came to power. Initially organised in Belgrade, the protests have spread to other parts of the country as well as majority ethnic Serb northern Kosovo, and regularly draw tens of thousands of people.

Regular elections are to take place due in April 2020, but the political situation is worsening week by week as protestors say they are determined to continue with their protests until their demand for early elections is met.

“Elections will be held either in June or in spring next year,” Vucic said following a session of the party's presidency. “Elections will not be held in autumn, and it is certain that we are now much closer to voting than before,” the president added.

The SNS leadership has already informed Prime Minister Ana Brnabic, a loyal acolyte of the president, of its decision. Brnabic’s government would have to resign before a date can be set for the election.

Early on in the protests, Vucic took a tough stance, saying he would not bow to protesters’ demands even if 5mn people took to the streets — a statement that inspired the protest slogan “1 in 5 million”.

But rather than bowing to protesters’ demands, Vucic appears to be employing a favourite tactic, calling a snap election, whether it is to reinforce the legitimacy of his government, extend its term in office or allow him to push through unpopular reforms. Since the start of the protests there has been speculation that Vucic would call a fresh election, fuelled by comments from the presidency.

The SNS came to power in 2012 but has never served a full and uninterrupted term, having called elections in 2014 and 2016. The first snap election allowed the SNS to improve its position vis a vis its coalition partner the Socialist Party of Serbia and Vucic to take the prime minister position from Socialist leader Ivica Dacic. In 2016, Vucic decided to affirm his support again, in what observers saw as a move intended mainly to extend its time in power at a time when its popularity was high rather than risk a tailing off in support before the next term election. The repeated elections led to widespread election fatigue in Serbia, as reported by bne IntelliNews during the vote in 2016.

Despite the popular support for the protests, polls show that Vucic’s SNS would again sweep the board in a new general election; for example a January poll by Faktor Plus quoted by local Politika newspaper indicated 54% of votes would be cast for the SNS versus only 14% for the Alliance for Serbia opposition group. Other polls have put the SNS’s backing at a lower but still healthy 40-50%.

However, while the opposition are calling for new elections, a vote almost certain to be won by the SNS is unlikely to satisfy them.

“Internally … the main complaint is the lack of free and fair elections, and specifically what is seen as the illegal and illegitimate concentration of power. Mr Vucic’s rule is viewed as illegal and illegitimate because Serbia is a parliamentary democracy, while Mr Vučić is running the country as if it were a presidential system in which he has the government and the parliament answer to him,” wrote Vladimir Gligorov of the Vienna Institute for International Economic Studies (wiiw) in a comment titled “The beginning of legitimacy crisis in Serbia”.

“Mr Vucic’s authoritarianism is therefore not about the inability to win elections, because he has won several, but the subversion of the constitution. Thus, while Mr Vucic contemplates early elections, perhaps in couple of months, which he would be likely to win, the opposition is getting ready to boycott them.”

Gligorov warns that: “The developments are starting to look like those in Macedonia [recently renamed North Macedonia] which eventually led to a change of government.” In Macedonia too, the government headed by Nikola Gruevski repeatedly won elections, in the latter years at least partly because of its control the administration. However, as these were not seen as free and fair by the opposition, they resorted instead to a parliamentary boycott and mass protests that eventually led to international mediation and the appointment of an interim government, followed in turn by a change of government.

However, there are certain differences: “The weakness of the opposition parties is why the Serbian legitimacy crisis is only in its early stages. On the one hand, they have next to nothing to offer to achieve external legitimacy, in stark contrast to the Macedonian case, while they hope to come to power on the back of the civic uprising that they cannot offer leadership to,” writes Gligorov.

On top of that, there is the question of Serbia’s primary policy goal, accession to the EU. The loss of support from the EU and US were critical to the removal of Gruevski’s government in Macedonia. The government had stalled Macedonia’s progress towards EU and Nato accession through its long standoff with neighbouring Greece, while the opposition said it could offer speedy progress — a promise it delivered on with the signing of the Prespa Agreement with Athens in 2018.

By contrast, Vucic has consistently maintained EU accession as his government’s top goal, and looks likely to steer Serbia into the bloc around 2025 if an agreement with Kosovo can be reached. Meanwhile, the Serbian protesters are a mixed band of opponents to Vucic ranging from liberal politicians and intellectuals to far right pro-Russian groups. While they are clear in their stance against authoritarianism and for media freedom, what they can offer in terms of Serbia’s future direction is as yet unclear, making it much harder for them to secure sufficient popular support against the ruling SNS to mount a credible bid for power.