Back to school: Belarusian students and school children clash with police 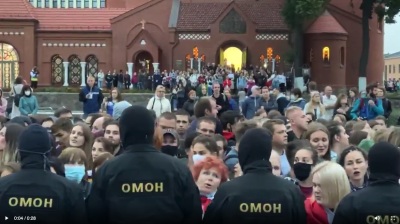 OMON and Belarusian students clashed in Minsk during an unscheduled rally on the first day of term / wiki
By Ben Aris in Berlin September 2, 2020

September 1 and all of Eastern Europe goes back to school at the end of the long summer holiday. Usually it is an exciting day, where the whole family puts on their best, but this year in Minsk students and even school children clashed with OMON riot police as Belarus' self-appointed President Alexander Lukashenko's renewed crackdown on his own population gathers momentum.

Thousands of students showed up for the first day of term, but many chose not to go to lectures but began an impromptu rally that marched into the centre of Minsk, only to be met with lines of OMON trying to prevent the unorganised demonstration.

While the young protestors were entirely peaceful, clashes broke out after OMON moved in and started detaining the demonstrators, dragging them off to awaiting paddy wagons.

The worst of the violence came in the first three days following the elections on August 9. Human rights organisations have documented over 450 cases of torture since the protests began, according to the Geneva-based United Nations Human Rights Office of the High Commissioner (OHCHR).

“The prohibition against torture is absolute under international human rights law,” the OHCHR said in a statement. “It cannot be justified for any reason. Similarly, no circumstances whatsoever, whether internal political instability or any other public emergency, may be invoked to practise, tolerate or justify enforced disappearances. Authorities in Belarus must immediately put an end to all human rights violations and combat impunity.”

Six people have died, and at least two of these appear to have been beaten to death and there are numerous reports of women being raped by police batons. More than 50 remain missing, according to the NGOs.

The OMON presence was beefed up and sent to campuses, where in one incident a tightly packed crowd of female students faced off against the OMON and began to sing Kupalinka, an old Belarusian folk song.

Shockingly the OMON also raided schools. At an elite state school OMON officers entered the school territory and arrested at least three teenagers, frogmarching them off the school grounds to awaiting vans.

A history teacher at the school bravely intervened to rescue a group of students who were carrying the red and white Belarusian flag that has become a symbol of the opposition, only to be detained in their place.

In another incident a crowd of protesters passing a school were greeted with shouts of “Long live Belarus!” by the children in the playground, some of whom were as young as eight, which were met with roars of approval.

Lukashenko has become emboldened after Russian President Vladimir Putin commented that he was prepared to send a security force to Belarus to quell unrest “if necessary.”

The Kremlin had been sitting on the fence, but has now come out decisively in Lukashenko’s defence, as it is keen to prevent an uncontrolled change of power that it can’t influence. The Kremlin has now confirmed it regards the massively falsified August 9 presidential elections as valid and Lukashenko as the legitimate president.

Moreover, the Kremlin also said in a statement on September 1 that it concurs with the Belarusian authorities that the newly established Coordinating Council that represents the opposition movement is unconstitutional. The authorities have opened some 50 criminal cases against the Coordinating Council, accusing it of trying to organise a coup d'état.

For their part the protesters show no sign of fatigue and indeed the increasing, but selective, violence of the OMON has only tempered the resolve to protest.

The Nexta Telegram channel that is the de facto organiser of the protests has called for a renewed general strike from September 1 in an effort to cripple the economy and force the government to the negotiating table.

Anecdotal evidence from reports on social media suggest that so far the strike is widespread and holding, despite factor managers' best efforts to cajole and intimidate works back to work.

Lukashenko is due in Moscow in the near future, where it seems increasingly likely he will sign off on documents to finalise setting up a Union state – a sort of Eurozone of the east.

A general agreement to create the Union state, that will nix borders between Belarus and Russia and create a single currency, was signed in 1999, but Lukasheno has been resisting putting the deal into place.

Belarus is already a member of the Eurasia Economic Union (EEU), which is based on the idea of the European Union (EU) and harmonises trade, tax and financial regulations amongst the members. However, the Union State  would significantly deepen the economic integration between the two states.

In comments on the upcoming meeting in Moscow Lukashenko mentioned that the goal was to create a market that stretched from Brest in western Belarus to Vladivostok on Russia’s eastern seaboard.

This is an echo of Putin’s oft repeated long-term foreign policy goal of creating a single market that spans the entire Eurasian continent from “Lisbon to Vladivostok.”

Rather than annex Belarus like Russia did with the Crimea, it seems more likely that Putin’s goal is to use Lukashenko’s weakness to create a single market structure with Belarus that is a step towards his goal of creating the Eurasian single market that the Kremlin feels is necessary to counter the rise of China as a global power. That means the Union State deal will be more sophisticated than a simple annexation, but will bring the two countries a lot closer together, both politically and economically.

At the same time Lukashenko gave some more details of the constitutional changes he is proposing as a peace offering to the protesters.

“Lukashenko openly admits that the entire political-judicial system is in his hands. The courts are subservient, but he interferes in an open manner, not from the back door. His control of the justice is overwhelming. Even the criminal cases are traced by him,” tweeted Dionis Cenusa, a PhD candidate that follows Belarus.

However, the text of the new constitution will not be drawn up in co-operation with the opposition and while it may devolve some more power away from the president it is unlikely to make Belarus any more democratic.

“It seems that Lukashenko doesn’t exclude a certain degree of democratisation, though a controlled one through “checks and balances” of non-democratic nature,” Cenusa commented.