ANALYSIS: Turkey’s net FX reserves excluding swaps fell to minus as of May 17 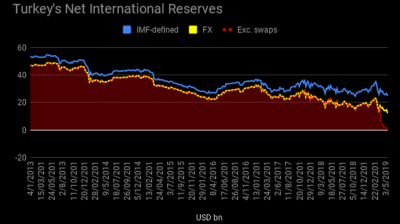 Turkey’s net foreign currency reserves, excluding the amount raised via short-term FX swaps with local lenders, fell to minus $867mn as of May 17 from plus $1.33bn a week ago, according to bne IntelliNews’ calculations based on the Turkish central bank’s latest weekly balance sheet and the estimated outstanding amount raised through the swap transactions.

The Central Bank of the Republic of Turkey (CBRT) persistently avoids calls from the markets to transparently provide details of recent developments in its FX reserves. It thus requires outside data mining to assess the actual situation.

Turkey’s IMF-defined net international reserves, including central bank reserves and public sector deposits, fell to $24.9bn as of May 17 from $26.7bn on May 10, the CBRT’s latest IMF-defined balance sheet, published based on a January 2002-dated Letter of Intent to the Fund, showed on May 23.

Finally, the swaps’ share in the net FX reserves must be gathered via secondary sources that have access to the central bank’s Turkish Lira Currency Swap Market, since the CBRT does not provide data on the market.

According to Bloomberg, FX swaps with local banks amounted to $13.2bn as of May 17 while a Financial Times report outlined on May 10 how the total amount on loan from local banks through one-week swaps hit a new high of $13.4bn on May 10, up from $11.7bn the previous week.

As a result, Turkey’s net FX reserves excluding swaps with local lenders can be seen to have fallen into negative territory as of May 17. And when public sector deposits are excluded, the negative zone can be seen extending all the way back to April 12.

Unsettling realisation
The unsettling realisation is that the Turkish government initially sold the central bank’s own FX reserves via public lenders from the beginning of March to mid-April to support President Recep Tayyip Erdogan’s Don Quixotesque battle to defend the battered local currency. Then, it sold public sector FX deposits held at the central bank from mid-April to mid-May.

And, in the latest turn of events, it started selling the swap money it raised from local lenders starting from the week ending on May 17.

The total amount of FX sold in the two and a half month period running from end-February to May 17 totals approximately $24bn. In parallel, the USD/TRY rate rose to 6.06 on May 17 from 5.34 at end-February, after hitting 6.25 on May 9.

Pleasing Asia traders
We can therefore note that the regulator still had $92.5bn as of May 17 to please traders in Asia by selling dollars in exchange for lira at lower prices than found on the market. (This is actually not the first time that Turkey’s chaotic monetary policies have inadvertently made some traders rich as from 2013 local lenders or foreign traders also benefited from arbitrage opportunities created by Erdogan’s impossible love for lower interest rates during the Fed’s tightening.)

Technically, the central bank could also take this amount from the local banks at swap auctions and sell it via public lenders.

For those deposits, banks are only buying the FX amounts necessary to hold at the central bank as reserve requirements; for the rest they are basically printing dollars.

The growing reserve requirements held at the central bank are preventing a sharp decline in the gross reserves.

Meanwhile, the local lenders use their FX deposits to support the central bank’s net reserves via swap auctions.

However, nobody’s feeling the heat because 95% of Turkey’s media are ‘responsible patriots’ and bluntly reject all probing questions on the small matter of what would happen if huge numbers of people suddenly said they would like to withdraw their FX deposits from the local banks.

Nervous deposit holders have since last summer’s currency crisis been looking for answers in the Turkish media as to whether their dollars are in safe hands, but all they’re told is essentially “It’s the same all over the world, all banking systems everywhere would fail if people didn’t trust their country’s banks”.

Banning the unpatriotic
But of course, where Turkey is concerned, if everyone started running to the banks, Erdogan would simply ban the attempt at a mass withdrawal before they were out the door. No doubt a few of these unpatriotic citizens could be hauled up on some instructive financial terrorism charges, but those doing the arresting would have to be selective—Turkey’s prisons are fit to burst by now, there’s not enough room to jail all FX deposit holders (terrorism charges have for years been all the rage for the Erdogan regime, they’re a catch-all for enemies left, right and centre, with even a Turkish basketball star in the US having to curtail his international match travel plans). If folk still don’t grasp what’s good for them, an outing for the pepper spray fuzz and a few rubber bullets might settle the issue.

In fact, and I kid you not, some people are already in Turkish jails on financial terrorism charges after making claims on social media that their government is more than capable of seizing FX deposits placed with local lenders.

Don’t be shy, ask yourself if Erdogan is by now running a full-blown banana republic. There are some impeccable rebuttals on offer—“Well, it’s the case in any country” or “All governments do the same” spring to mind—but, beware, normalising this kind of thing may catch up with ‘yours truly’ one of these days.