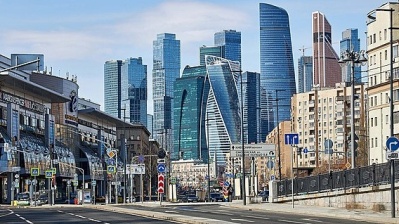 US ownership of Russian equities rose in 2021, in spite of mounting political tensions between the two countries. At end of the year, 58% of the total international holdings in Russian equities belonged to American funds, compared with 53% the previous year and just 41% in 2013.

Foreign investment in Russia is increasingly coming under the spotlight as tensions mount over Ukraine and both sides consider deterrence options. This growing appetite for Russian securities among American investors suggests that the market is more dovish on the threat of conflict than was previously considered.

The data also illustrate the extent to which American and Russian markets are bound up with one another in an interconnected global economy. Potential sanctions would risk creating a so-called “Boomerang Effect”, damaging the interests of foreign investors – including US funds that manage the pensions of average Americans – as well as the Russian economy.

Since the marketisation of Russia’s economy in the wake of the Soviet Union’s collapse, the country has been attracting ever greater flows of foreign capital. US money represents the single largest international source of investment for Russia, with American businesses alone responsible for $100bn of investment in the country, according to a survey by the American Chamber of Commerce in Russia (AmCham).

The report by AmCham found that “Official statistics underestimate the actual level of economic relations between Russia and the US”, with the figures obtained by the survey nine times higher than the official value of American investment.

Last year saw a record-high sum of American money in Russian equities, in a sign that the country is now being treated as a serious long-term investment opportunity by foreign investors.

“Two factors coincided to make last year such a successful one,” explained Denis Zabolotnev, head of Russian & CIS Sales Coverage at London-based brokerage Sova Capital. “Firstly, we spent the whole year anticipating the end of lockdowns and the normalisation of the economy, which was positive for commodities and banks. And the second factor was expectations of the reduction of liquidity support from the Fed. As a result, investors focused on value investments – shares which are relatively cheap, and defensive stocks, which are generally bought during late cycles. Russian shares fit perfectly into this trend. They’ve always been quite affordable, and were even more so last year due to the fact that energy prices had already grown and companies showed strong earnings the previous year, so prices were unable to increase as strongly. This stimulated a new inflow of capital.”

Russian financial stocks are among the more popular securities held by American investors. At least 21.8% of equities issued by online financial services group TCS are owned by Americans, who represent the single largest group of investors in the company, according to data from Bloomberg.

Moscow Exchange (MOEX) stock is also in line with this trend, with about 60% of the free float of the company owned by US institutions, according to data on its website.

With even state-owned companies now paying out dividends as high as 10-11%, Russian stocks offer very lucrative yields for those with the nerve to stick it out through the market’s ups and downs.

“It’s very difficult to find blue chips with such competitive dividend yields. These companies are affordable, fast-growing (when you take into account what is going on with energy prices), and pay high dividends. So if we discount the geopolitical risks, it’s a no-brainer: just buy, buy, buy,” said Zabolotnev.

Russia’s booming tech stocks are also a hit with US investors. 28.6% of shares in online retail platform OZON are held by American investors, according to Bloomberg, while telecom stocks like MTS are also a major draw for US money.

Russia’s signature commodity and metallurgy stocks are also seeing rising demand from the US, with 16.4% of equities in Polymetal International held by American investors, compared with just 5% held by Russians, according to figures from Bloomberg. Over a quarter of the reported shares in aluminium giant RUSAL are also held by investors from North America.

These stocks did particularly well towards the end of 2021 during the commodity market rally.

“At the end of the year, it probably came down to inflation”, explained Zabolotnev. “Russian shares are very strongly tied to producers of commodities – gas, oil and metals. So these companies will win from inflation when there’s an increase in energy prices. Russian stocks can act as a sort of hedge.”

Russia also remained a darling for managers of Global Emerging Markets (GEM) funds throughout 2021. Indeed, Russia was the most popular market for such funds in December, boasting the most overweight (OW) investors and the fewest underweight (UW) of any major market. The net figure for OW-UW funds stood at +15 in December, according to research by JP Morgan. And with Russian stocks nearing all-time highs on a 12-month forward dividend yield basis and reporting record price/earnings ratios relative to global equities, there is no prospect of Russia falling off the list of favoured markets any time soon.

The US is not just the largest investor in Russian public equities; it’s also the biggest player in strategic investment. While official figures from the CBR list Cyprus as the greatest source of foreign direct investment (FDI) in Russia, the first ever estimate of Russian FDI based on Ultimate Investing Country (UIC) published by the United Nations Conference on Trade and Development (UNCTAD) in 2017, revealed that the USA is the single largest investor in the Russian economy.

American direct investment in Russia can come in the form of existing companies expanding into Russia, acquiring international peers, obtaining a 10% or greater stake in a Russian firm, or borrowing money in Russia to expand their own operations.

After a bearish few weeks, the view from the Russian market is now one of tentative optimism. “I think interest will return now,” affirmed Zabolotnev. “The earlier market correction gives long-term investors the opportunity to enter the market at more competitive prices. Of course, people are still being cautious, because it’s not entirely clear how the situation will continue to develop. But some investors are certainly returning: we have seen decent demand from international investors for fintech company Tinkoff, oil company Lukoil and diamond producer Alrosa.”

Diversification, for commodities exporters, is a challenging business. Yet the wide-ranging investment which Russia is continuing to attract from foreign players – including from the US – indicates that it is managing this with no small degree of success.

More importantly, though, it shows that the Russian economy is more integrated with global markets than many in the West might think. And with American investment in Russia showing no signs of slowing, it is perhaps time for both sides to dial down the rhetoric on mutually damaging sanctions and consider how to safeguard their own interests as well as those of the world.